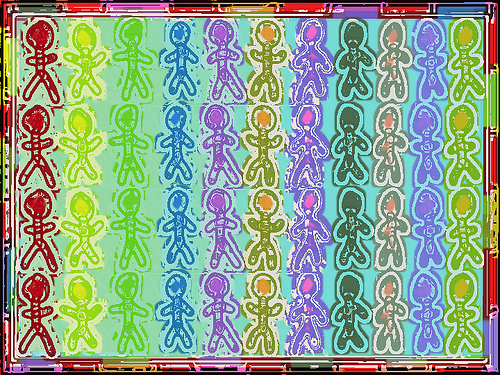 Life has a funny way of teaching us lessons. When there is something you need to learn, something that you need to work on, the same situation will continue to repeat itself until you either learn your lesson or find a healthy way of dealing with that particular issue.

Think of the movie Groundhog Day. It was one of my favorites. Once Bill Murray realized that he was living the same day over and over again, he came up with ways to fix the things that went wrong before.

He learned how to fix the relationship with the object of his affection. He even learned to deal better with the annoying insurance salesman who approached him every morning.

It wasn’t until he learned to accept his fate that the cycle of reliving each day ended. He also became more compassionate and more sympathetic—an overall better version of himself.

I hear people say: Why do I keep going through the same things in relationships? I’m with different people, but things always end up being the same, or they act just like someone who I used to know.

Some of these people give up, some get stuck in a vicious cycle of their own making, and others don’t even realize that they are basically chasing their tail, repeating the same situation over and over.

Recently, I found myself in a pattern of attraction. It took some time for me to understand it. I had a hard time coming to terms with my divorce, and for years I wanted a second chance in that area of my life. A new start. A new marriage.

I went through a period of time when the only guys who asked me out were either married or in a relationship of some type, live-in or on-and-off with a current girlfriend.

Instead of pursuing those situations (for obvious reasons) I would instead go for the single, yet emotionally unavailable guy. And I would try to win him over, to no avail, trying to prove that I was “good enough.”

It wasn’t until recently that I had an “a ha” moment, in which I realized that the critic I was trying to “prove myself” to was not someone else. It was me—the inner critic who still had not come to terms with the dissolution of my marriage and considered it a complete failure.

My thought process was: If I could turn this person around or make this person change his mind and love me, then I would be worthy of love.

It was an erroneous way of thinking. Had I not done the emotional self reflection I would probably still be in a pattern of trying to win someone’s love, or what I like to call chasing my own tail and going around in circles.

A good question to ask is: Am I reliving the same scene, over and over again? What’s my part in that?

It might not be in relationships, but in different situations, like at work for example, when the same issue comes up disguised. If you work with the public it could be the same issue with different customers, until you find a way to deal with it or until you learn the lesson.

While working with the public, I have noticed times when every single person I come across is upset, angry, or annoyed, and at first I would react in a similar way. We are all mirrors of ourselves.

After a number of people with the same, or similar issue, came up to me, I started to try to find different ways to resolve the problems—for example, not taking things personally and showing empathy to the person I was helping.

Around that time in my life a pattern, or lesson, I was in could be described as: How to stop taking things personally and how to view problems as opportunities.

Had I not experienced the same problems with customers and made the necessary changes, I would possibly still be in the process of learning that lesson.

I’m still working on this; some lessons take longer than others. Instead of reacting to situations, when something comes up and seems familiar, I try to stand back—if even for a second—to think.

For a while it will seem like coincidences playing out, but over time the pattern of your lesson will come up. This is the lesson you need to learn at this time.

It could be a lesson in humility, or a lesson in gratitude, or maybe you may need to learn empathy to see things from the other person’s point of view.

Instead of reacting all the time, every time something challenging comes up it could be an opportunity to learn.

One lesson I’ve needed to learn recently can be summarized with a Shakespeare quote:

“To thine own self be true.”

I’m realizing that, no matter what other people say, do, or think about us, it is our opinions of ourselves that really matter. And, when making decisions, sometimes it is good to question our own intentions. Think: What am I doing here? Or what am I up to?

Ultimately the question I’ve needed to ask myself is: Am I being completely honest with myself? What is the particular reason why I’m scared of change?

There are times when opportunities have come up for me to change my residence, or my place of employment, or even my car, and I haven’t seized those possibilities. I’ve stayed in place. Why?

One particular opportunity entailed moving out of my city to live closer to my family. My family members have offered to help with an out-of-state move, including offering me a place to stay with my children. But still, I haven’t.

When I started being honest with myself, I realized that this fear of change was a big issue for me. I needed to handle it because, if I did not, situations would continue to come up where I was forced by circumstances to make a decision involving a change.

I learned that not making a decision is in itself a decision—and that my fear of change was actually a fear of failure. That was when I noticed the pattern of things breaking, or circumstances changing, forcing me to deal with my inability to make decisions.

Find your pattern. Find your lesson.

A good way of recognizing patterns in your life is by listening to your feelings, your intuition. I’ve found that when I am involved in a pattern, my emotions run a bit stronger, kind of like a warning from my subconscious mind to pay attention to what’s happening.

More often than not, I recognize the pattern when the situation has ended, or changed. Hindsight is 20/20 in this way. It can be difficult to recognize a pattern while it’s playing out. So, usually we realize what happened afterward. And that is okay.

In turn, life will continue to send us ways to overcome our patterns and learn our individual lessons.

The key is to be alert. When you’re open to recognizing a pattern, you can change it by learning the lesson, and in doing so, change your life.

Maria Cristina McDonald is a writer from the Dominican Republic living in Pittsburgh. She is currently working on her first book, a collection of short stories, which she started this year. A mother, she’s also a store manager, a mom, and a dreamer. Email her at starchick77(AT)gmail(DOT)com.

How to Set Healthy Boundaries and Protect Your Space and Energy

6 Lessons Life Has Taught Me on Embracing Change and Impermanence