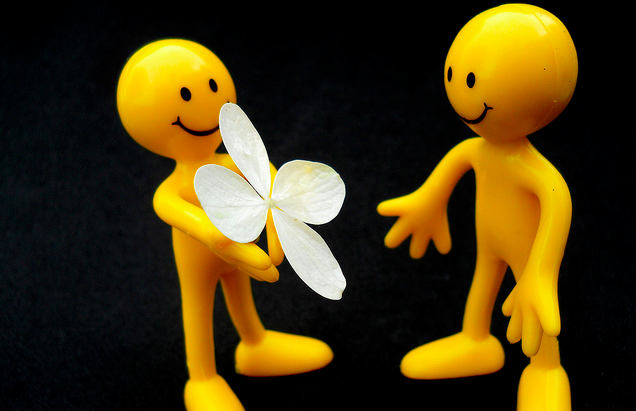 When I was seventeen years old, I decided to make a change.

Instead of keeping my opinions to myself, I was going to start sharing them.

Every time I had a kind thought about someone, I was going to tell them. And anytime I heard a compliment about someone who wasn’t in the room, I would let them know.

If I loved someone’s outfit in the grocery store, I was going to say so. When my sister did something brave, I would tell her. When I felt a rush of affection for my best friend, I’d voice it. And when someone called a colleague brilliant, I would shoot them a note.

This was something new for me. For whatever reason, I usually kept my nice thoughts to myself. I wasn’t in the habit of doling out compliments.

And, yet, when I got a random compliment, it changed the shape of my entire day, sometimes my entire week.

And so, at seventeen, I decided to change.

It sounds like a pretty simple change to make in your day-to-day life, but even simple changes can be hard. Because so much of what we do is habit. If we’ve been keeping our thoughts to ourselves for twenty or thirty or even just seventeen years, it can be tough to start speaking up.

And boy did it.

The first time I complimented a stranger, he fell in love with me. Other times, I earned smiles, thoughtful pauses, and quiet, sincere thank-yous.

But the most powerful change I saw was in the ripple effect that my decision had on those around me. In particular: on two girls that I met on my trip to Costa Rica later that year.

It was a volunteer trip for teenagers and I was what they called a MAG Leader—a sort of camp counselor who roomed with and took responsibility for the wellbeing of five girls.

Two of my five girls did not get along. They barely spoke, and when they did it was to antagonize the other. One girl made physical threats. Both did a lot of talking behind each other’s backs—until I introduced my compliment commitment to the group.

I sat the girls in a circle and handed out index cards. Each index card had one of our names written on the front. And I told the girls that we were going to take a few minutes to pass around these cards.

On each card, they should write one thing they really admired about the person whose name was on the card. One sincere compliment.

Afterward, each girl got the card with her name on it.

At the end of the few minutes we spent with these index cards, the two teenaged enemies were shocked to discover that the other person had something really insightful to put on their card. One girl commented on the strength and confidence of the other. The second girl admired the poise of the first.

Suddenly and without meaning to, these girls respected each other. Suddenly, they each had something positive to say about the other.

They never became best friends. But the bad-mouthing and the threats and the antagonism just melted away. A grudging respect and even courtesy took their place.

This is when I really understood the power of compliments. The power of saying the kind things we think.

It doesn’t take that much effort. You don’t have to manufacture a compliment for every person that passes by. But by simply voicing the nice thoughts that go through all our heads on a daily basis—“I love your sweater,” “What a beautiful smile,” “You’re so brave,” “I’m so glad we’re friends”—we can make the world just a little bit better every day.

Gigi Griffis is a world-traveling entrepreneur and writer with a special love for inspiring stories, new places, and living in the moment. In May 2012, she sold her stuff and took to the road with a growing business and a pint-sized pooch. She also just wrote an unconventional Italy guidebook. You can follow her adventures and life lessons at gigigriffis.com.