Sorry If I “Trigger” You, But I Will Never Move On
By Alicia McDaniels 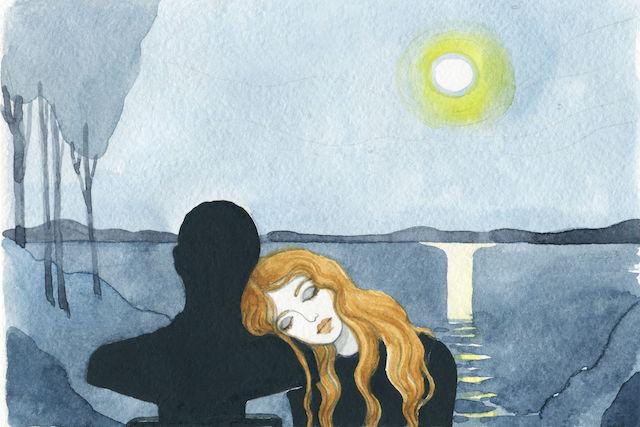 “It’s so much darker when a light goes out than it would have been if it had never shone.” ~John Steinbeck

When you lose someone close to you, there are a plethora of duties you must first complete.

When my boyfriend passed away from cancer at the age of twenty-nine, I was just twenty-three. We lived together in a claustrophobic, studio apartment in lower Manhattan. I recall many people telling me to physically move from the apartment, as that’s where he passed away, but moving in Manhattan is never an ideal situation to be in, especially when you are traumatized.

Many of the duties that need to be completed after a death are material. The other person’s belongings need to be sorted through, their finances need to be evaluated, services need to be arranged, and then family and friends of the deceased must be contacted.

To make matters worse for me, we were never married—so my right to taking care of some of these things was non-existent.

It took me three years to open my boyfriend’s closet. I called a friend of his when I was ready. Though she was living on the opposite coast, she booked a flight for the next month and came to my rescue.

As we were going through his clothes and reminiscing on his favorite shirts and the ones that he made (he was a fashion designer), we smiled and silently began to look at separate pieces. I was attempting to get a photo of his out of a picture frame, and I was working on it for quite awhile. My friend was looking at more of his shirts. A momentary twinkle of music began to play.

“That’s cool, does that picture frame play music?” she asked.

I looked up and saw a music box of mine, nearby but completely isolated from another object’s touch, playing for a few more beats and then abruptly stop.

I knew it was him.

Just as I never expected myself to completely move on from this loss, I had also hoped that he wouldn’t as well. I get subtle hints of his presence through dreams, and sometimes they are more tangible like the music box.

I had much help from friends and family members in the following months after his death. It was when it hit almost the year mark that people started to forget the reality of the pain I was feeling every day. I had been told to “move on” or stop writing about the loss, as it could be triggering for other people. Well, I’m sorry if this “triggers” you, but I will never move on.

I will continue to bask in the memories from a life that was cut too soon.

I will still talk about him, write about him, and I will not force myself to forget him.

I will still recognize the signs of him trying to reach out to me from another plain of existence.

I will remember the dreams of him that brought me closer to my own spirituality.

This is something that is and always will be a part of me, for it is a love that was real and unique, and nothing can ever replace it or diminish that memory.

If you are told to move on, I challenge you to acknowledge the same.

Never forget the essence of the human being you have lost.

Continue to write down the adventures that you had, and continue to share them with others even though the body of the one you have lost no longer exists.

Know that your pain and heartbreak is a symptom of your love, and you should never be forced to move on from that one of a kind feeling you experienced.

The beautiful thing about them is that you will never move on from them.

Alicia McDaniels moved to New York City in 2009 to pursue her passion in the creative arts. She’s currently working on an online outlet to showcase creative writing and other forms of artistic expression, which can be found at www.thewritingcabin.com. .