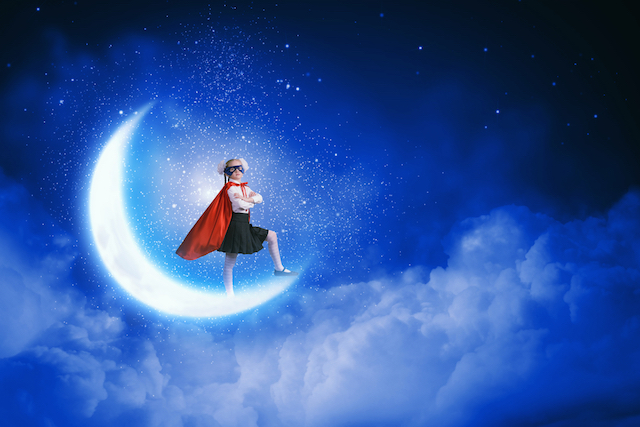 “The gap between what we do and what we’re capable of doing would suffice to solve most of the world’s problems.” ~Gandhi

I have lived most of my life with a challenging contradiction.

I am a hopeless idealist and dreamer. And I have also dealt with high levels of anxiety, worry, and doubt, especially as an adult.

You can probably already see how this can go horribly wrong!

I’d have an idea of something I’d like to do.

An idea that would excite and thrill me. I would feel energized—enthusiastic and excited about the possibility of making a dream a reality. Then I’d hit a challenge or obstacle. And the doubt would come.

Sometimes the result would be so subtle that I wouldn’t even notice its effects—that I was avoiding doing things to make my idea happen.

Like when I decided to relearn piano as an adult, something I’d loved as a child and would lose myself in playing for hours, especially during the challenging times growing up. I had been heartbroken when I had to give it up because we had to return the piano I’d been using to practice on.

As a gift to myself I bought a piano.

I was so excited. It felt so good to be giving attention to part of myself that I felt had been neglected.

But as I practiced I struggled.

And I started to doubt whether I’d be able to master the skills that had seemed to come so easily as a child.

The frustration built and I started putting in less and less effort and time. I eventually gave it up amid excuses about not having the time.

Other times the effects of the doubt were far more obvious and painful—the fear, endless procrastination, frustration, and eventual defeat. Another idea relegated to the dusty pile of unfulfilled potential.

The older I got, the harder this cycle became. I became more and more frustrated and filled with a sense of urgency to try and follow through with my ideas.

It got to a point where, in hindsight I realize, I was depressed, although I didn’t recognize it at the time. I’d lost my confidence in myself and my ability to do the things that really mattered to me.

I’d love to say that I was able to turn this around in the five easy steps that we’re all craving.

The reality is that it was a long and non-linear journey of self-discovery, voracious learning, experimentation, trial and error, and small successes and failures, until one day I realized that something had profoundly changed at the core of my being.

I trusted myself again.

I had rediscovered something that I knew had always been there. That sense of confident learning and experimentation that small children have, when they push themselves to their limits without the fear of being judged or shamed for making mistakes.

I could take risks again. Small at first to build confidence. It felt so good. I felt alive, filled with hope and possibility.

Now when I have an idea I am able to act on it (well, most of the time anyway!), and sustain the energy and motivation over long time periods in order for the idea to become a reality.

If anything of my experience resonates with you, then you have it too. The self-doubt habit.

And, in fact, if you’re human, you definitely have it. As Stephen Pressfield wrote in his book Do the Work, “We’re wrong to think we’re the only ones struggling with resistance. Everyone who has a body experiences resistance.” (Resistance is the word he uses to refer to fear/worry/self-doubt—anything that takes you away from doing the thing that matters).

Now that I have recognized this profoundly destructive habit in myself, I see it everywhere and hear it in the way people talk about themselves and their ideas.

“I would love to do this, but I don’t think I can.” “That would be my dream, but it would probably never happen.”

“But what if I am not good enough?”

And the outcome? We conclude: “Why even bother trying?” We give up before investing the necessary effort that would lead to a successful outcome.

Two ideas have been key in helping me both recognize this destructive habit and being able to mitigate the effects so that I can build my confidence in my ability to do the things that matter to me.

Dr Russ Harris, author of The Confidence Gap, describes the confidence gap as the place we get stuck when fear gets in the way of our dreams and ambitions. We believe that we can’t achieve or even work on our goals until we feel more confident.

This, he says, is the wrong rule of confidence.

Lightbulb moment for me.

I realized that I had been putting off some many things, waiting for the day when I would magically feel more confident!

Recognizing that this day would probably never come, I started experimenting with strategies and ideas to help me start taking small steps, which, despite the fear and doubt, helped me build my confidence over time.

2. You can always get better.

The other body of work that profoundly shifted my thinking and helped me to take confident action was the work of Carol Dweck, Ph.D, author of Mindset.

Through her research at Stanford University, she found that people could be generally divided into two categories depending on their beliefs about themselves—either “fixed” or “growth” mindset.

People with fixed mindsets believe that their talents and intelligence are fixed, so they spend their lives trying to prove themselves. Their self-worth is always on the line, and failure is to be avoided at all costs. When they do experience failure, they feel intense shame and see it as proof of not being good enough.

People with growth mindsets believe that talents and intelligence can be developed through effort and practice, so they take on challenges so they can grow and learn. Challenges are to be embraced as the path to fulfilling potential and learning.

Another huge aha for me.

I realized that I had been operating with a fixed mindset.

When I started to work on an idea, whether I was working on a creative project or trying to develop a new skill, like learning to play the piano, I’d give up as soon as I struggled. Struggle for me equalled “I can’t”; I’m not good enough.”

However, when I could recognize my thinking and see it from a growth mindset perspective, I could catch that thought and say to myself, “I am learning, I can get better with practice,” which allowed me to keep putting in the effort needed to develop my skills and become more confident in the area.

I could reframe struggle as evidence that I was learning rather than a sign of some innate flaw that I needed to be ashamed about.

This one mindset shift has alone had the biggest impact in helping me keep being able to take action.

1. Do whatever you can to become aware of your thoughts during the day.

What are you saying to yourself? How are you talking about yourself to other people? Meditate, journal, do whatever it takes. It is the most important thing that you can do for yourself.

2. Make a conscious effort to eliminate any thoughts or talk that undermines you.

Change it to a growth mindset. Instead of self-doubt thoughts like “What if I can’t” or “What if I’m not good enough” try thoughts like “I am learning, it is challenging but I with practice and effort I will get better” and ask yourself questions like: “What is one thing I can do today to increase my chances of succeeding?”

Alison Breen is a Performance Coach and Psychologist who helps women entrepreneurs build confidence to achieve success in their businesses and lives. Sign up for her FREE guide to help you overcome procrastination so that you can move forward with your business or other meaningful goals