Stop Looking for Signs and Trust Yourself
By Leslie Jordan Clary 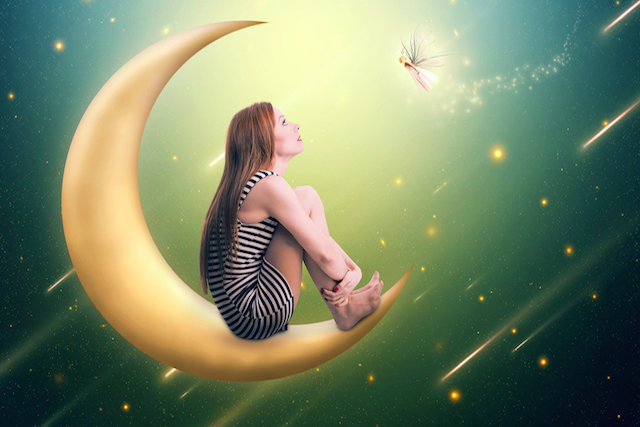 “Always try to remember that most of the things that happen in this world aren’t signs. They happen because they happen, and their only real significance lies in normal cause and effect. You’ll drive yourself crazy if you start trying to pry the meaning out of every gust of wind or rainsquall. I’m not denying that there might actually be a few signs that you won’t want to miss. Knowing the difference is the tricky part.” ~David Eddings

A few years ago I took the Buddhist precepts at a Zen monastery in northern California. At the end of the ceremony we were all given the symbolic Kesa to wear around our necks while we meditated.

Afterward, on the drive home, I hit a torrential Sierra snowstorm and pulled into a gas station to fill my tank and make sure everything was running well before I headed into the mountains. When I got home, I realized I had lost my Kesa.

I called the gas station, the only place I had stopped, but they hadn’t seen it. I continued to call them every day for a week certain that dropping my Kesa on the snow-covered ground was akin to spitting in holy water at a Catholic church.

I told myself it was a sign that I’m really a flake. My knowledge of Buddhism was superficial at best.

What right did I have to take the precepts? I obviously wasn’t ready for them. I should have studied harder, meditated longer, been more serious about the whole practice.

About a year later at another retreat I was talking with one of the monks and she said, “I noticed you never wear your Kesa when you come up here. I was just wondering about that.”

I hesitated. Lying to a monk would surely be worse than losing my Kesa, so I told her the story as well as my long litany of reasons as to why I didn’t deserve another Kesa.

When I finished she smiled and said, “All this means is you lost your Kesa.”

She walked with me over to a closet, reached into a box, and handed me another one. “Maybe it means you were a little absentminded, but that’s it. It’s no big deal and it certainly doesn’t mean you are not worthy of being Buddhist.”

I have to admit I’ve spent a disproportionate amount of time looking for signs, when in fact, I was really looking for validation.

Maybe it was to justify a bad decision. And if the signs were negative, like in the case of the Kesa, it just confirmed my feelings of low self-esteem. It was a sign I was really as hopeless as I secretly believed.

Signs and symbols can be powerful tools for exploring our unconscious, but they aren’t going to tell us what to do or who we are. We have to decide that.

I have a friend who told me whenever she sees a blue cornflower it’s a sign her deceased mother is saying hello. That seems to me a very sweet and appropriate way to use signs and symbols.

Of course, she doesn’t literally believe her mother is communicating, but blue flowers have become a symbolic way to remember her love, pause for a moment and appreciate their relationship.

The symbols we dream can be profound and may be a sign of something we need to look at in our lives. And we can find signs in nature that serve as tools of transformation. But we shouldn’t let them rule our lives. Carl Jung said, “Until you make the unconscious conscious, it will direct your life and you will call it fate.”

Do you find yourself looking for signs in nature or the heavens? Here are some thoughts for keeping signs and symbols in perspective.

Even if the universe does send us signs, how we interpret them is purely subjective.

The universe and consciousness are mysterious. For all we know, beings from other dimensions could be sending us signs all the time, but our capacity to understand is still limited by the physical world and the bodies we inhabit. It’s probably best to focus on dimensions we know and understand.

Anything can be a sign if we want it badly enough.

Once I found an arrowhead near my house and convinced myself it was a sign it would be okay to have an affair with the married, albeit separated, medicine man who had been pursuing me ever since I’d gone to his sweat lodge as a guest.

In this case common sense rather than signs won out and I pointed him and his buffalo drum back to his wife. If you find yourself pulled in a direction that you know is probably not good for you, trust your good sense and don’t let signs lead you astray.

Believing too strongly in signs can be disempowering.

As a woman with a history of abuse and bad decision-making, I feel strongly about the rights of empowerment and dignity for all humans of all ages. Allowing yourself to be ruled by signs and portents not only takes away your power of choice, it excuses you from responsibility.

Stepping up to the plate and taking responsibility for your part in things is incredibly empowering.

Focusing too much on signs takes us out of experiencing the moment.

We usually look for signs either as justification of something we’ve done or as portents about what to do in the future. Often, we already know what we should do deep inside and looking for signs can lead to obsession.

Instead, next time you have to make a hard decision, sit quietly for a while. Get practical advice, look at the situation rationally, and then decide. It will probably work out just as well as waiting for a feather to float down and point you in a certain direction.

None of this means you have to give up astrology, runes, or the Tarot, but use them as tools for unlocking what’s already inside you. They are not signals from the universe that you should do one thing or another. You already have all the answers inside. Trust yourself.

Leslie Clary is a writer, photographer and online college instructor who believes it’s never too late to create a life we will love living. She writes a monthly newsletter, Our Daily Zen, and is working on a book about healing from child sexual abuse.

Stop Living on Autopilot: 5 Ways to Live an Amazing Life

The Technology of Joy: Tools for Happiness (Interview & Book Giveaway)