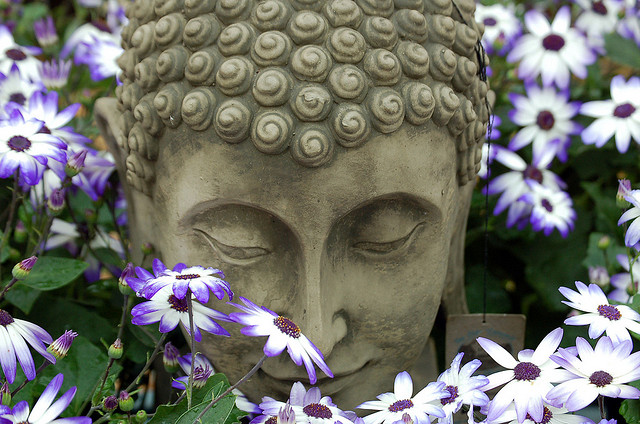 “All that we are is the result of what we have thought. The mind is everything. What we think we become.” ~Buddha

Tending to my garden is an ongoing process.

I’m not into chemical pesticides, but my natural weed killers are yoga, meditation, inspirational reading, and hanging out with positive people.

Sure-fire weed food is worrying about what other people think, taking things personally, and stressing out about situations that don’t matter or are out of my control.

I used to find myself having drawn-out imaginary conversations: “And if she said this, I would say that…” with absolutely no outcome. Now I catch myself and change the channel.

I’ve seen firsthand how dangerous it is to let weeds snarl and take over.

My dear Grandma Betty lived to be ninety-two. She outlived all six of her children, and had a lifetime of good physical health, yet her mind was tangled with weeds that began growing decades before she died.

She was suspicious, distrusting, and convinced that people didn’t have her best interests at heart or were talking behind her back. I never noticed it when I was a kid, but it became increasingly apparent later on.

Perhaps she felt lonely when my grandfather died early and she had too much time alone with her thoughts.

It’s easy to over-think things, jump to conclusions, or get wrapped in negativity when you don’t have others to give you a fresh perspective. It then becomes a bigger problem when you alienate the ones who love you the most because you’re difficult to be around.

This is what eventually happened. I loved her to bits, but she became challenging to talk to. The cup wasn’t half full; it was bone dry.

This was in sharp contrast to my Grandma Millie. She was always smiling or laughing with a twinkle in her eye.

Life dealt her a crappy deck. She was widowed young and had to raise three kids alone. She nursed her second husband through a nightmare of Alzheimer’s. She also experienced the tragic loss of both of her sons.

But she always picked herself back up and remained positive.

She drove for Meals on Wheels, delivering to people younger than herself.

She went blind from cataracts disease in her early eighties but continued to find volunteer work so she could feel useful and keep active and social.

Insistent on staying in her apartment, she remained fiercely independent.

I used to ask her how she kept her great outlook when she’d been through so much. Her reply, “Well, I could sit around complaining, but then nobody would want to be around me!”

Truer words have never been spoken.

Complaining is pointless. It doesn’t make things any better, and it drains the complainer and everyone else around them.

I loved both of my grandmas equally, but I know which one I was more likely to pick up the phone and call.

Having these two amazing examples in my life gave me huge inspiration. I saw for myself how important it is to tend to my garden regularly and give it high quality fertilizers to keep it abundant and healthy.

My friends are my fertilizers!

My positive Grandma had a gaggle of girlfriends and those gals knew how to have a good time. They got together and played cards or Scrabble, went off on outings, and even went on a camping trip in their eighties. They were each other’s support systems.

She used to say to me, when you get married, don’t ever forget about your girlfriends. They may outlive your husband and be all you have in your old age.

Her very best friend died two days before she did. Both asked after the other in their final moments, neither knowing that the other was dying. They’d been friends for eighty-eight years.

Both grandmas were my mentors in their very own ways. One being an example of how I want to live my life, the other showing what happens if I allow my mind to become overgrown and tangled with weeds.

I wish I could have done something to help my Grandma Betty tend to her garden. If she had the awareness, she could have taken a machete to those weeds and felt a lot happier.

We can all use the garden metaphor to bring an awareness of what helps our own mind grow and flourish, rather than creating a dark, tangled mess.

What’s on your list of fertilizers and weed-killers? How does your garden grow?

Kelly Pietrangeli is the creator of Project Me for Busy Mothers, helping women find a happier balance between the kids - and everything else. Mixing practicality with self-awareness, Kelly helps mothers get on top of their endless to-do’s and see life beyond the laundry pile. Grab her free Life Wheel Tool for discovering what needs your focus first.

A Natural Approach to Mental Health: How to Reduce Anxiety Through Gardening

A Guide to Peace for Anyone with a Crazy, Messed Up Mind