The Beauty of Being Different
By Caroline D. James 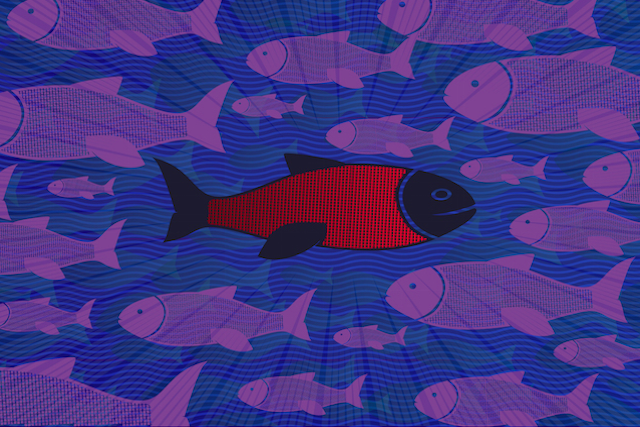 “We must never be afraid to be a sign of contradiction for the world.” ~Mother Teresa

I’ve felt like I was different ever since I was in elementary school, when my personality started to settle and I came to realize I didn’t look, think, feel, learn, or act like my peers.

Back in the eighties and early nineties it seemed that there weren’t many labels to catalog people by, but still I knew I was different, and teachers and classmates made sure I knew it. “Freak” or “weirdo” were two of their favorite names.

In current times there would be many labels to identify me with: ADD, ADHD, dyslexic, depressive, and antisocial, among other medical terms. Socially, there are many other labels to box me in: problematic, troublemaker, weird, crazy, and dramatic, among others.

Labels seemed to be used to put me into boxes so shrinks, teachers, and the world could try to understand me.

The world tends to see what is different as something ugly and wrong, as if anything “abnormal” is something needing to be fixed.

If I were to see myself through the eyes of the world, I’d be frightened to look at myself in the mirror.

As the years went by the bullying didn’t stop. Everyone knew me by a thousand different names, except the one my mother had given me. I didn’t mind; I actually preferred for them not to use my name. I didn’t want them to taint it with their harsh voices.

In high school, I wanted to have friends and be a part of something; I wanted to feel like I wasn’t a freak. I tried really hard to fit in, but trying to be something I wasn’t became emotionally draining.

My father could see this and told me, “Ducks fly in flocks and eagles fly alone.”

I didn’t want to be an eagle. I wanted to be a duck, because they had company.

I started smoking to fit in with the “cool” group, dating boys I wasn’t even interested in (it was what girls my age did), and I learned to laugh and keep my mouth shut when I saw any injustice being done.

I once screamed and burst into tears when I saw one of my “friends” kill a bee out of fun. I couldn’t understand how someone could take away the life of such an innocent being intentionally.

After being bullied for my reaction, they started calling me “crazy” and so… what did I do? I started killing bees.

I loathed myself. I had turned into this person I didn’t like for the sole purpose of “fitting in.” But at the same time I hated what I was, I hated being oversensitive, stupid, a daydreamer, rebellious, and sad.

I wasn’t happy with my physical appearance either. The body I had at twelve years old remained the body I would have for the rest of my life—extremely skinny and no curves.

People, assuming I had an eating disorder, would thoughtlessly say, “Eat something. Skinny girls are not pretty.” It was just my anatomy, different to that of the voluptuous Mexican bodies women have in this part of the world.

Then, a boy came my way. We became good friends, and because he didn’t want to hurt my feelings and lead me on, he asked if I could pretend to be his girlfriend.

Marcus was gay. He couldn’t stand the idea of being different and showing it to the world. He needed a fake girlfriend to take home to his parents, to brag about to his friends, and to walk around town with, showing he was “normal.”

We were teenagers, and our self-esteem was determined by the acceptance of society.

He knew how I felt for being different and not being able to fit in. I had a different mindset and he had a different sexual orientation. It was in our differences where we found a unity that forged a beautiful friendship.

A few years later Marcus found the courage to “come out.” His parents supported him. He lost many friends but made new ones and could be entirely himself around them.

There was no more pretending. He found acceptance within his heart, even if the world around him shamed him. He became comfortable within his own skin, and that to him was happiness.

I came to understand that the criticism came, not because we were wrong (we weren’t horrible human beings), but because we were different to them (society). In their mind, their way of thinking and acting was right, so anything that navigated away from that was wrong.

It was their limited mindset that created in them an inability to accept other people’s differences. But that wasn’t our problem; we weren’t what they saw.

Our problem came from the fact that we had given them the power to control our self-esteem instead of finding that acceptance and love within ourselves.

As more years passed, experience taught me a deeper understanding about my place in this world.

I came to forgive and love myself because I was never ugly, stupid, antisocial, or psychotic, as the world saw me. I felt like that because I was looking at myself through their eyes instead of my own.

Even through university I had to deal with the stigma of being considered stupid by my peers, for having bad grammar and spelling mistakes. To them my intellectual capacity was determined by my writing skills instead of the content of my writing.

ADD or ADHD have never existed in my mind. I simply block out lame and boring lectures I’m not interested in, and when I find myself in an environment I dislike, my mind travels away to the beautiful world of my imagination.

I am selective with my friends, not antisocial. I don’t wish to surround myself with people that undervalue me or with whom I don’t feel comfortable.

I am not a troublemaker, but I refuse to stand by while I see any injustice being done. I am not rebellious; I just refuse to follow rules that go against my values. I’m not dramatic, I am passionate.

Yes, I cry a lot. I was born crying and I’ve never stopped. However, it is not because I have chronic depression (I have battled depression and it is a term I wouldn’t use lightly).

It is because I am oversensitive, and even as a child I could see what people rarely saw or simply didn’t care about: corruption, poverty, injustice, and cruelty, among other issues. This affected me profoundly, and still does. I am empathetic toward others’ suffering.

I wasn’t a duck, and even if being an eagle can be lonely, the view from the top gives life a wider perspective and a deeper understanding. Although my journey hasn’t been entirely lonely, it is definitely a less traveled one.

I’ve met wonderful people with whom I can be myself, and even if I don´t have thousands of friends, I have a few who are worth the world.

Different is what I’ll always be, because I don’t match with the preferred educational, economic, religious, and social systems that want to shape me into a predesigned mold that I can’t fit into.

However, by accepting myself, I came to realize that I am absolutely beautiful. Not because I am better or worse than anyone else, but because I am exactly what I am supposed to be.

Everyone is different in some way or another, but only a few dare to show it to the world. The majority try to fit into a mold that is too tight to feel free in.

Marcus is feeling incredibly comfortable in his amazing homosexual being. He has a wonderful partner and they have recently adopted a beautiful baby girl.

Once I asked him, “What would you like her to be when she grows up?

Fish swimming against the stream image via Shutterstock

Caroline D. James is the founder and writer of wanderside.com, where she explores a different perspective to ordinary life.