The Days Will Run Out
By Roger Horn 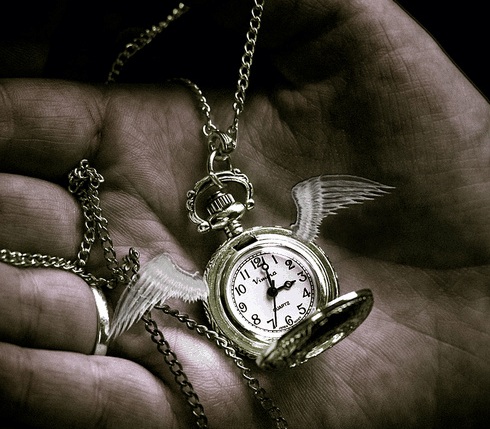 “If we are not fully ourselves, truly in the present moment, we miss everything.” ~Thich Nhat Hanh

I heard this story recently while listening to a favorite radio show of mine. It was about this homeless man who was detailing some of his experience with homelessness.

He told stories of sleeping outside in the rain and waiting for hours to get into an overcrowded shelter. He even told a story about another homeless man, who could speak no English, who told him about how he had spent a sleepless night in a trash compactor because he felt safer and was drier than sleeping out on the street.

He didn’t get much sleep, however, because all night he kept worrying that someone might press “the button.”

The single story he told that stood out in my mind, however, was the story of the time he was offered the job of house-sitting for a friend.  As you could imagine, the thought of existing somewhere safely, of being sheltered from the weather, of being able to relax on a couch and watch TV was overwhelming for him.

He was excited like a child might be excited before being told that his parents had decided to go out and buy him a brand new bicycle.

There was no doubt that he was thrilled about all these things, and he certainly had a right to be. With all that he was about to experience, however, the thing that he looked forward to the most was sleeping.

Really? Sleeping? I wondered, how could he be excited about sleeping when he had a house all to himself?

The thing is, sleeping in a warm bed, to most of us, is something we take for granted. Something we don’t ever think about. But, as this man detailed, sleeping is tough when you’re homeless.

You don’t get much sleep when the cold and wet are invading every inch of your body. Most of the time, when you do sleep, you sleep with one eye open for fear of having something stolen, or being attacked.

So when he first fell like a rough heavy stone into the softness of his friend’s bed that first night, all he could do was lay there looking at the dark quiet ceiling and feel grateful. Then he said something that was special to me. Something that resonated inside me like the assertive crisp ring of a bell.

He said the first night was the best. When asked why, he said because he knew he had 16 nights more to go. That every night after, he knew was one less he would be able to enjoy that safe, secure, warm bed.

Now this story could easily be about gratefulness, about a collective sigh of relief from those of us who know we have a warm bed to go home to tonight. It could also be a call for compassion for those who have less than we do.

But it’s more than that for me. For me, it’s about those 16 days—a reminder of the time we all have that is limited.

The limited number of days we have to sleep in a warm bed. The fleeting time we have with our families, our spouses. The finite number of times we can smell that beautiful smell in the air as the leaves begin to fall and quietly blanket the ground in autumn.

I think of myself over the years, and even now, rushing through days in my job as a software designer in a sort of fog. Thinking about nothing but getting through the next project, the next work week, so I could enjoy the time on the weekend.

The stuff I was “getting through” were the flagstones and foundations of my very self.  The very things that make up my life. I was smashing through them without respect like a plow through a soft field.

All these things that make up our lives will neither last, nor repeat forever. To capture them and hold on to them is impossible. To even try to is unwise. The only way to honor them fully then, is to be mindful of each experience we have while it’s happening.  Even if that experience is as seemingly mundane as sleeping in a warm soft bed.

Roger Horn is a software architect with a passion for writing.  He hopes he is lucky enough to write a book someday that may help and inspire others.  He writes a blog at Oatmeal in a Bowl.

Why I Now Complain Less and Appreciate More

50 People Share What They’re Grateful to Do Every Day