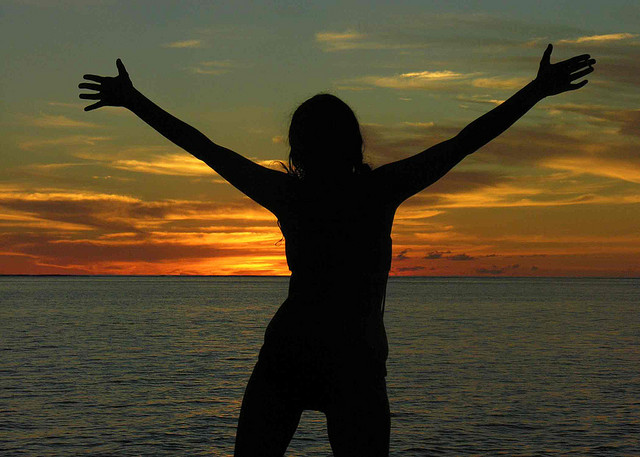 Once upon a time, there was a young woman who carried Fear as her constant companion.

It wasn’t fear of wild animals, impending danger, or the shadows that lurk in the night. In fact, her friend Fear had become disassociated with any real thing. It had become an entity all its own that could morph and wind its way into any circumstance the woman happened to be in.

The woman wasn’t born this way.

When she was small, Fear had served her well and taught her how to stay out of harm’s way. But as the girl grew and experienced the world around her (which could sometimes be harsh and painful), Fear found a foothold for power.

Fear taught the girl that Harsh and Painful were always just around the corner, even when they weren’t, and showed her how to avoid life so that she wouldn’t meet them. When she did meet Harsh and Painful, Fear said, “I told you so. You better stick with me.”

Sometimes her erstwhile friend Fear thought it was fun to poke around in the young woman’s mind, searching for weak spots so that it could manufacture something that felt as real as an oncoming train or a lurking monster.

Fear was sneaky like that. It liked to torment and create havoc in the woman’s heart and mind. It whispered stories in her ear that weren’t true or only had a grain of truth. Fear liked to embellish. Fear liked to stir the pot.

The woman knew that she’d allowed Fear to become her master. But she kept feeding it by worrying, over-thinking, pontificating, ruminating, and believing without question. As Fear munched away growing fatter and stronger, the young woman began to shrink.

She shrunk so small that she could fit into the safe box that Fear hadn’t infiltrated—little did she know Fear had built just for her.

She felt comfortable in the box; and Fear liked her there because it kept him in control.

The Power of Truth

Fortunately, the box had windows. And after a while, the woman started looking outside. She saw other people in boxes just like hers. Just like her, they were safe and quietly contained with Fear guarding the door.

But she saw something else, something that stirred her heart and soul.

She saw people who weren’t in boxes.

These people had room to run, move freely, and do anything they wished. They were doing exciting, creative, adventurous things (many of the same things that Fear had warned her about).

But they were happy. They weren’t hiding. In fact, she could see Fear chasing them, but these people laughed at Fear. And when Fear did catch them, they would firmly cast Fear aside and put Fear in a box!

The woman cracked the door of the box, and yelled over Fear’s head to the people outside, “How did you conquer Fear like that? How did you put Fear in a box?”

“Truth,” they shouted back. “We battled Fear with Truth and Inquiry, and Fear lost all of its powers!”

“How do I find Truth and Inquiry?” asked the woman.

“It’s that light inside of you,” they said. “And all you have to do is shine it in Fear’s face.”

Tentatively, the woman picked one of Fear’s favorite weak spots, and she look inside herself for Truth and Inquiry. She found a faint, flickering light and held it up to Fear.

With practice, the woman was able to shine the light on all of the weak spots that Fear had created. Eventually, the woman grew too big, too strong, too powerful for the box.

As soon as she burst out of the box, she saw Fear cowering outside.

Her heart went out to Fear, because she remembered how it felt to cower. She gently placed Fear in the box, because she knew she might need Fear on occasion. But now she saw Fear for what it was—her servant, not her master. And Truth had set her free.

I was once that woman. And maybe you were or are too. Or that man.

How much power does Fear have over you?

How many of Fear’s stories do you believe?

Are you living in the box or have you begun your escape?

Well here is the good news:

You can put Fear in a box. And let me tell you, once you do this, your life will turn around 180 degrees.

You will do things you never thought possible.

You will be bold and enthusiastic about life.

You will find passion in life and seize every opportunity.

If you want to start disempowering Fear right now, here are three things you can do today:

1. Isolate one fear at a time.

Start with one that really interferes with your growth. For me it was fear of abandonment. That was my biggie. What’s yours? You might fail? You might not be loved? You might disappoint someone?

2. Ask yourself why you have this fear.

This is a question you should ask until you run out of answers. Write down every reason you can think of, starting with the main one that probably occurred when you were small. Write these reasons down so you don’t forget them.

3. Finally, start undermining these reasons with evidence to the contrary.

You might feel a certain way about yourself, but that doesn’t make it true. And even if there were truth in the original belief and feelings, you have lived a lot of life since then.

There are hundreds of reasons why you are smart, lovable, attractive, etc. Write those down too.

Personal growth writer and teacher Byron Katie has this to say about the thoughts that Fear creates:

“So, how do you get back to heaven? To begin with, just notice the thoughts that take you away from it. You don’t have to believe everything your thoughts tell you. Just become familiar with the particular thoughts you use to deprive yourself of happiness. It may seem strange at first to get to know yourself in this way, but becoming familiar with your stressful thoughts  will show you the way home to everything you need.”

Remember, you don’t have to believe the stories Fear tells you. Write them down, and then shine the light of Truth and Inquiry on them. Find evidence to the contrary, and attach your faith on this evidence rather than Fear’s stories.

With practice, you will escape the box and firmly place Fear within it.

Barrie Davenport is a certified personal coach, author, and founder of Live Bold and Bloom. Please take her Free Self-Confidence Test to find out your personal confidence score.

Honor Your Progress and the Path That Led You Here

How to Boost Your Self-Esteem When You’re Insecure