The Freedom of Not Needing To Be Right
By Hannah Eagle 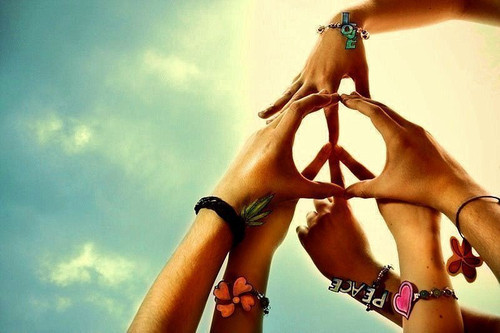 “You have your way. I have my way. As for the right way, the correct way, and the only way, it does not exist.” ~Friedrich Nietzsche

Yesterday I drove my mother and father to the VA hospital in Albuquerque for a doctor’s appointment. I had never been to a VA hospital before. I guess I should have expected the numbers of crutches and canes, armless and legless veterans, young and weathered faces alike.

I was personally witnessing the costs endured when humans war against each other.

“Isn’t it odd,” I said to my mother, “that human beings war with each other?”

Why in the world do we do that?

Then I considered the ways in which we war on an interpersonal level. We humans war to varying degrees with our partners, our friends, our bosses, our co-workers, our siblings, our parents—pretty much all in the name of our need to be “right” or the need not to be wrong.

We war over ideas and beliefs that we often have never questioned. These include ideas from our upbringings, our religions, our scars and wounds, and our existential need to identify ourselves in some way.

How early did we lose our childlike wonder? When did we lose that innocent state in which we did not judge others, nor need to be “right”—when we saw the best in everything and everyone, and when it did not matter that someone was Christian, Muslim, Buddhist, atheist, republican, democrat, omnivorous, vegetarian, gay, or of a different race?

When I observe my ten-year-old grandson, he appears to have no tendency to judge other people, not yet anyway. He has no need to diminish others, nor does he feel threatened by them.

Would we, as children, have told lies about someone just because we wanted to win an election? Would we have been dismissive or even cruel to someone because they were of another race or religion? I don’t think so.

As little children we only cared that we were loved. And we were still curious about everything.

Somewhere along the way we lose our innocence and start to judge others. This becomes a primary source of our social anxiety and the undermining of our self-esteem, because if we are judging others, we fear that we are also being judged.

Could we perhaps untangle and re-do ourselves? Could we resist closing ourselves off with dogma or beliefs, prejudice, and rules? Could we allow ourselves the freedom of not knowing and reclaim our curiosity?

A beautiful YouTube video called We Love You Iran & Israel depicts an Israeli man reaching out to Iranian people. He says, “Our countries are talking war. In order to go to war . . . I have to hate you. I don’t hate you. I don’t even know you. No Iranian has ever done me harm. I have only met one Iranian in a museum in Paris. Nice dude.”

Reality is malleable. The reality, which we have imposed upon ourselves or had planted in our heads by others to make us feel safe, is also the reality that keeps us from really appreciating our own humanness and really loving other human beings—those beings who are more like us than we realize, even if we don’t know them.

The reason I took my father to the VA hospital is because he is suffering from dementia. For two hours the psychologist at the VA fired questions at my father. He was trying to determine how severe my father’s dementia had become.

We left the hospital and walked to the car. I was reflecting on how childlike my father had become. A man who had once been so self-confident now needed to be led by the hand and guided into the car seat.

He did not understand what I was saying when I asked him to buckle his seat belt.

As we drove back toward Santa Fe, he turned to me. He said, “I don’t think I passed the test. I didn’t get the answers right, did I?” I assured him, “You did fine dad.”

If he must return to a childlike state I’m hoping he will also return to a state of innocence where he has the freedom of not needing to be right.

Photo by To Days of Inspiration

How to Stop the War in Your Head and Find Peace