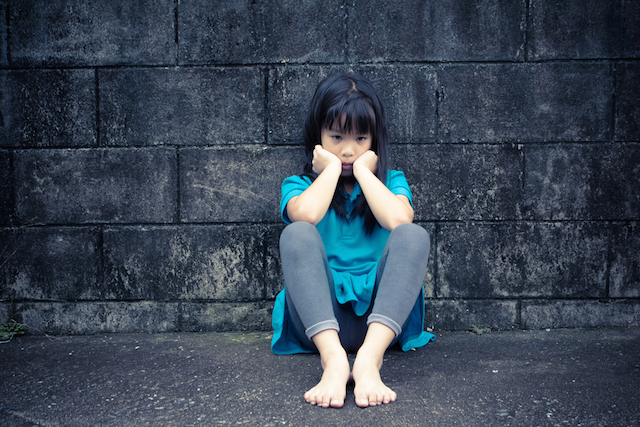 “It is never to late to have a happy childhood.” ~Tom Robbins

A few days ago, when my older brother and I were sorting through old family photos, we found a picture of us from when we were about five and six years old. We were smiling. Just two kids full of life with no idea of what was to come.

This was before the start of all the rage—before all the pain and an unfortunate series of events.

My childhood was rough. I know some people may wish to return to those young innocent years of playing outside and going about our way without a worry in the world. However, if I had a choice to return to my childhood, I would hesitate at the gate.

At the tender age of eleven, I was snatched from my home. I didn’t know why, all I knew was that my mother had done something bad and that my siblings and I had to be removed for our safety.

When I was old enough to understand what had happened, I learned that my mother had gone to a mental institution to receive help and counseling for her anger.

I used to think, “Well, everyone gets angry,” but this was different.

Her words were a bit too harsh, her actions a bit too unpredictable, her impact a bit too negative. I remember sitting in the bathroom crying and wondering why I just couldn’t live a simple, happy life like the children in movies.

Recovering from a traumatic childhood can be extremely difficult, especially when taking into consideration how valuable our childhoods are when preparing for adulthood. As of today, although my mother is generally in a more stable mindset, I can still hear the sound of her voice shouting threats I wouldn’t wish on my worst enemy.

When attempting to deal with a traumatic childhood, I feel the first solution that comes to mind is to forget it. However, trying to pretend that something did not happen doesn’t fix the negativity it has already enforced.

When I first entered college, I saw it as an opportunity to get away from home and interact with others. With this in mind, I left my family home, but brought all the effects of my childhood with me.

Throughout my high school years, I had become agoraphobic. I barely left my house and it pained me to attend school. When I entered college the same pattern persisted.

I was scarred and I blamed my mother.

She was the reason I was so negative, vain, and alone. I finally came to the conclusion that I no longer wanted to dwell on the past, allowing it to devour me inside out. So I eventually had to learn to let go, which proved more difficult than I first perceived.

The first step to recovering from a childhood of physical, emotional, or mental abuse would be to attack it at the source. I mean standing head to head with what happened and not running away. We must accept that it happened and admit that it has affected us.

When I attempted to dispose of my issue by running off to college, I forgot that it was still the reason behind my negative attitude. I would try so hard to disguise the fact that something was wrong and that I was unhappy.

I thought it made me look weak and defeated. However, accepting that something is wrong takes even more strength than trying to pretend that everything is all right.

It also allows you to take control of your life and put yourself on the path to healing.

After determining that I was indeed affected by my mother’s explosive fits of rage, which led to other events throughout my childhood, I needed clarification as to why all of these things had occurred.

I wanted to get to the bottom and dig up the roots of this issue in order to seek closure. So I sat and spoke with my mother, something I had never done. She explained to me that anger disorders had always been prominent in her family.

She informed me of the time my grandmother killed a puppy trapped under her barn because the noise kept her up at night.

She also told me how my grandfather went into explosive fits of rage after coming home from a night of drinking. At one point he even attempted to hit her with an axe. I then realized that my mother’s behavior did not come from her genuinely despising me, but was a direct reflection of what she’d experienced during her childhood.

With this, I knew that I had to change because I did not want to continue to spread this lineage of anger.

When we ask questions and gain clarification, we begin to achieve a sense of peace or relief that we finally have the answers and can learn to move on. When we choose to run away from our problems, we never get the clarification we need to move forward.

Another important step on the journey to recovery is learning to define our happiness by ourselves. Quite often, we tend to dwell on the challenges of our childhood and blame them on one particular person, or blame them for our current unhappiness.

Not to say that our traumatic childhoods had no effect of our adult lives, but rather the reason we are still unhappy is because we’ve chosen not to recognize these effects and properly address them so that we may move forward.

If you choose to remain in a state of unhappiness due to the challenges faced during childhood, you will never be able to find peace.

I felt my childhood had made me a victim, and thought that was the reason behind my unhappiness and overall instability.

One of the most common mistakes we make when referencing our traumatic childhoods is comparing them to others with “normal” childhood experiences. When we compare ourselves, we are taking away from the essence of who we are. Our childhoods, traumatic or not, are a part of who we are and what makes us, us.

Take a look around and think of where you are now. You may have a beautiful family and the career you’ve always wanted. As for me, had I not had such a traumatic childhood I wouldn’t be able to write this post and help someone else by sharing my story.

Think of all the good things that have come from your experience and you might just begin to be thankful you had it.

One of the major lessons I’ve learned throughout my entire journey is that sometimes you just have to let go and trust that everything will turn out okay. Moving on from the past is stressful, especially when we feel as if we have an obligation to fix something that can no longer be fixed.

We also tend to look to the past for answers to current situations. By doing this we are unintentionally taking away from present moment. Holding on to my traumatic childhood prevented me from moving forward with the rest of my life.

It wasn’t my childhood preventing me from accomplishing things; it was my negative perception of myself. When I finally decided enough was enough, I began to look at things from a different angle.

Maybe it wasn’t my fault or anyone’s fault for that matter—it doesn’t matter. What does matter is finding happiness once again and being content with what happened in my past without allowing it to become a burden.

We sometimes get this clouded illusion of how life is supposed to be, but truth be told, you have to fight through some bad days, to earn the best days of your life.

Jaquetta Chamblee is a student, blogger and lover of all things beauty, art and writing related. Her blog anoptimistspen.blogspot.com is a literary lifestyle blog dedicated to personal well-ness and self-improvement with a focus on positivity,inspiration,balance and happiness. You may often find Jaquetta settling a dispute, drinking herbal tea, quoting Shakespeare, or making someone smile.

How to Reap the Benefits of Post-Traumatic Growth

5 Childhood Mantras That Are Poisoning Your Happiness

Post-Traumatic Growth: How Pain Can Lead to Gain