The Magic of Momentum: A Simple Path to Achieving Any Goal
By Dominic Beeton 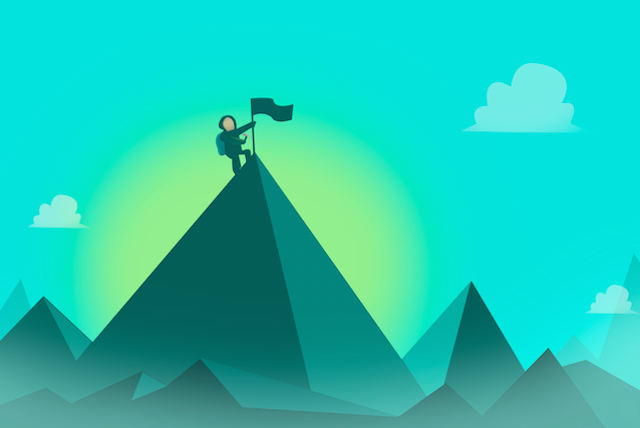 “A journey of a thousand miles must begin with a single step.” ~Confucius

What stops so many people from changing their lives is a lack of momentum. They feel daunted by the sheer size of the task ahead and so revert back to inertia. It’s so much easier to just trudge along and hope that one day it gets better.

I used to get up at 5.30 in the morning every Tuesday to attend a business networking breakfast. It was a severe shock to the system at first, and as I drove to the hotel where the event was held, I thought to myself, “What am I doing on this motorway so early?”

This was quickly followed by the question “What are all those other people doing on this motorway, and where are they going?” I did this for over three years.

Don’t get me wrong, I did get business from attending this group. Not great business, but business nonetheless.

I actually ended up running this networking group, and that’s when the trouble started. I reasoned that in order for everyone to get more business, we should grow the group. Instantly, splinter groups formed and started lobbying to get me removed as director.

I got upset at first, as I was acting in what I thought was the interests of the group, but they just wanted a cozy boys club with a few token females and weren’t interested in ramping things up.

My partner suggested instead of getting up at 5.30 in the morning to get stabbed in the back by a load of schoolchildren, I get up at the same time and compose music in my garage studio. So I took her advice and quit the networking group the next week. It was the best thing I have ever done.

In that hour before I went to my day job, I set about composing a full blown symphony for a seventy-five-piece orchestra, followed by four other albums worth of material. All this from just one hour a week.

I had truly engaged upon my journey of a thousand miles and it began with a single step—setting aside one hour a week. So what lessons have I learnt from this experience?

1. Find just one hour a day or a week and see what you can accomplish.

It’s the discipline of finding that single hour in which to start your masterwork that makes the journey truly begin. I swapped the hour I was giving to the networking club for an hour in my studio.

Examine your week. Could you get up an hour early five days a week, or one day a week? It might be best to avoid Mondays or Fridays, but what about the other days? Is your dream important enough to give up an hour of sleep?

2. When you do something strictly, regularly, and without fail, it becomes a habit.

It was the fixing of a set time each week that would not be broken, come hell or high water. I used to sit in the garage with a fan heater on, hat, fingerless gloves, scarf, and winter coat, but I never broke that appointment with myself. I already had shown I had the discipline to do this from attending the networking group.

3. A single step if followed by another step becomes a journey of a thousand miles.

Taking the first step is one of the hardest parts, so don’t think about the end destination. If you were going to walk for a thousand miles, you would probably give up if you kept thinking, “How am I going to walk that far?”

So just think about achieving small steps. I would write just a few bars each week, and it gradually grew into a symphony. It took six months, but I got there in the end.

4. There is magic in momentum.

Once the weekly or daily routine has set in, it becomes a firm habit. Then you start to see progress and begin to feel proud of what is forming in front of your eyes.

You might be building a blog or website, and that little bit of regular effort begins to create something amazing. If you are trying to tackle a physical goal, like running a marathon, your regular discipline will, over time, lead to increased strength and endurance.

That is the magic of momentum. Once the flywheel has got over the enormous effort to begin moving, momentum takes over and the wheel begins to turn on its own using momentum. This is what you will find once the habit is engrained.

5. Don’t stop the habit once you have that magical momentum.

It might have been tempting to stop the early Tuesday morning habit when I finished my symphony so I could get some more sleep. But having seen the magic of momentum, I then plunged myself into composing new tracks for the next album, and was bashing them out at the rate of a new track each week.

Twelve weeks later another album was completed, and a month later it was in the shops. Wow! This was exciting. This was addictive.

Don’t make the mistake of pausing or losing momentum. Launch into the next project, the next book, the next album, the next painting, the next mosaic, the next marathon, the next website. Keep that morning habit.

6. Leave that magical hour for your dream.

Don’t be tempted to do administrative tasks in that golden hour. Try to make that hour as productive as possible.

If you are painting, then get your palette ready ahead of the golden hour (choose the paints and have the tubes of paint lined up).

If you are a musician, get your sound palette ready in advance (choose your drum sounds, samples, etc.).

If you are writer, have your research done and your notes written up so that you can launch into the first chapter or the next chapter.

If you’re training for a marathon, have your clothes and shoes ready so you have the full hour to run.

Equally, promoting your masterpiece should be confined to other times of the day. If you are building a website or blog, just focus on writing new content. Leave the social media promotion to another time.

7. An hour becomes much much more—just wait and see!

The clever thing about limiting yourself to one hour a week or one hour a day is that before you know it, you are doing tasks relating to that hour at other spare slots in your week. The momentum creates excitement; you see that you are making serious progress, and this spurs you on to more; at least, that how it works for me.

Go and take your first step on that thousand-mile journey!

Man at summit image via Shutterstock

Dominic Beeton is the owner and creator of meditatia.com a new web site which is designed to be a one-stop shop for all of your meditation needs with recommendations for the best meditation music, meditation equipment, meditation books, meditation retreats and with some specially created guided meditations covering a whole range of topics from depression, breathing, reiki healing, to helping you cope with stress and insomnia.