The Power of “No”: Better Boundaries Lead to a Better Life
By Jen Picicci 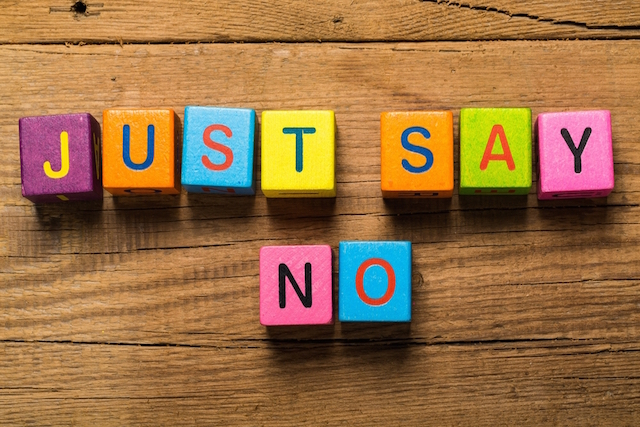 “’No’ is a complete sentence.” ~Anne Lamott

When I went to counseling for the first time, my therapist told me I needed better boundaries. I had no idea what he was talking about, and although the book he lent me on the subject helped a little, I still didn’t really get it.

I tried here and there to integrate the few concepts I’d picked up from the book into my life, but mostly I stayed away from anything that could be considered boundary setting, as I still couldn’t quite figure out what it meant.

A decade after my first introduction to the concept, though, two life coaches I admire happened to be teaching a free class on the subject, and I jumped at the chance to take my learning to the next level.

After hearing what they had to say, things finally started to click. I began to understand that it wasn’t about trying to control someone else’s actions, but rather about being clear on what action I would take if and when my boundaries were crossed.

Still, it was hard for me to set boundaries, because I felt very uncertain of myself and my worth. Was it okay to tell someone no? Or that I wasn’t satisfied with the way things were?

Since the world works in mysterious ways, chances to test my boundaries continue appearing in my life whether I want them to or not.

Most recently, it came up with my child, an area where I’d never realized boundaries would be necessary (silly, but true).

My mother and I were out to lunch with my toddler, and I spent most of the wait for our food walking around bouncing my daughter, trying to keep her entertained. After the food came I was barely able to eat, because my little girl wanted to be held and would not stay in her high chair.

After that experience, my mom sent me an email. She thought I needed to start setting some gentle boundaries with my daughter, and was buying me a book that she thought would help. I burst out crying because I knew she was right.

As soon and I started reading the book, I finally got it. Everything that I’d been trying to understand about boundaries for the last fifteen years finally made sense, and I finally started believing it was okay for me to get my needs met, and that it was totally acceptable to say no sometimes.

This change with my daughter has come more easily than I imagined, and, thankfully, it’s starting to impact how I interact with adults, too.

I have a feeling I’m going to need another fifteen years to become an expert at setting boundaries, but here are some things I’ve learned so far.

1. Most of us are socialized to actively not have boundaries.

We’re taught that we shouldn’t say no, and that it would be impolite to ignore another person’s wishes.

This point was driven home for me the other day when I saw a kid’s TV program that made it clear that even the youngest members of our society are being taught they should always do what other people want.

In the program, one character (a bear) was watching TV, but then a second character (a little girl) came in and wanted to watch something else. She gave the bear big, sad, puppy dog eyes, and, even though he clearly didn’t want to, he gave up the TV.

As the girl watched TV, the bear paced back and forth, wishing he was watching his program. He kept hoping she would fall asleep, or go play outside, so he could get back to what he really wanted to be doing.

This is exactly how we start learning that it’s not okay to say exactly what we want. When we’re young and impressionable, we’re taught that it’s rude to be clear on what we do and do not like.

2. Not having clear boundaries keeps us in lives that are subpar.

In my own life not having boundaries has been a huge problem. It’s allowed me to stay in unhealthy relationships (both the romantic kind and the friend kind), made me a doormat, and made me anxious and unhappy.

Setting a boundary simply means saying no if I don’t want to do something (instead of feeling guilty and obligated). It means telling my husband what I need rather than getting mad when he doesn’t read my mind. It means only working the hours I’ve set for myself rather than running myself ragged trying to do “enough.”

3. When you refuse to set a boundary, it leads to anger and resentment.

It can tear relationships apart, keep you in a role at work that doesn’t suit you, and cause you to feel badly about yourself.

Looking back on a relationship I had in college, I can see how not having boundaries set us up for failure. My boyfriend at the time was involved in a couple of activities that made me very uncomfortable, but I wouldn’t set a boundary with him, so instead I just lashed out with anger and jealousy, which just made things worse.

The healthiest thing I could have done for myself would have been to say, “I’m not okay with you doing that. If that’s something you’re going to continue doing, I am going to have to remove myself from this relationship.” I was too fearful of the consequences, though, so it took me a long time to end things.

One caveat when setting boundaries like this: You must be sure you’re not setting a limit in order to control or change someone. You must be truly ready to walk away from the relationship, and you absolutely must be setting the boundary from a place of love and respect for yourself, rather than a place of fear and control toward someone else.

4. Setting boundaries is going to be uncomfortable sometimes.

If you always say yes to everything, or let your parents or neighbors come over unannounced even though it really annoys you, or always clean up after your spouse because you don’t want to upset him or her by requesting they clean up after themselves, you’re going to have to take some scary steps to start drawing lines in the sand.

The uncomfortable feelings don’t mean you shouldn’t follow through with boundary setting, though. In the long run everyone will be happier if you set better boundaries, and if they’re not, it’s really and truly their own issue, not yours.

5. Boundaries are never about trying to change someone else’s actions or behaviors.

This one gets kind of tricky for me, but think of it like this: If you’re in the car and someone is speeding, your boundary wouldn’t be “stop driving so fast,” it would be “I am very scared that you’re driving this fast; if you’re not going to slow down, I need you stop and to let me out of the car.”

You’re not trying to make them stop speeding, you’re telling them you won’t allow yourself to be in the speeding car.

Boundaries are about getting your needs met, but not by getting someone else to sacrifice their own needs. You have to decide what you really want for your own life, and then go about setting limits that serve these goals.

Just say no image via Shutterstock

How to Set Boundaries in Awkward Situations with Strangers

How to Set Difficult Boundaries in a Compassionate Way