The Secret Laid-Back, Always-Happy Guy Knows That You Don’t
By Craig Boneau 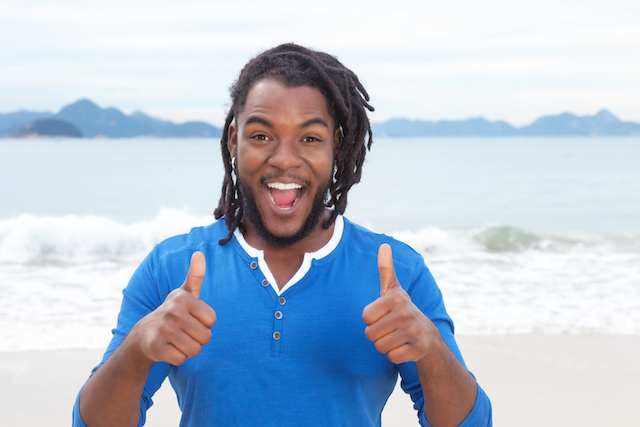 “Most folks are as happy as they make their minds up to be.” ~Abraham Lincoln

Have you ever wondered, “How is that guy always so laid back and freaking happy all the time, no matter what is going on around him?”

I certainly do. Although I have known a few people that fall into this category, the one that stands out most is a friend I met my freshman year in college in my dorm. I’ll call him Andy.

Andy smiled all the time. A huge smile. Raining outside, smiling. Test didn’t go that well, smiling. From the moment I met him, he gave a big handshake with an equally big and goofy smile. When I picture Andy, I always picture him smiling.

It was certainly annoying at times. When I wanted to brood over a test gone bad or a girl I couldn’t get to notice me, smiling Andy made it nearly impossible. But I mostly just wanted to know why he was always so happy so I could be annoyingly cheery too.

Is Andy and the rest of his ilk just delusional?

No, (at least not exactly), they actually know something you don’t, and I’m going to let you in on it. But first, let’s talk about you.

If you are like the vast majority of us, your baseline is that things are generally “fine.” You probably could have slept a little longer, but waking up wasn’t terrible. You could eat better, but you do okay. You don’t particularly love your job, but it could be worse.

All that is normal. Right?

Probably, but that doesn’t really mean it’s good. In fact, considering the general happiness level of the average person isn’t particularly high, normal is probably not what you are looking for.

The problem is that while “fine” and “normal” aren’t exactly the “big hairy goals” that everyone likes to talk about, they don’t hurt either.

“Fine” and “normal” are comfortable. Your basic needs are met and, at this point, it happens with almost no intentional engagement from you:

You wake up, get ready, go to work, do some stuff, waste some time, do some more stuff, go home, watch TV, go to bed, repeat.

You might have some exercise thrown in here and there. You hang out with your friends, your significant other, or your kids. But most days look pretty similar to this.

Except when your time on this planet is over, you don’t want “fine” to be the best description of your life.

You want something more.

Okay, so how to do you get it?

What does that guy know that you don’t? Let’s look closer at the happy guy. What’s his take on life?

Fine isn’t it. He thinks life is great, awesome, brilliant, and extraordinary. And he’s right.

And that’s the secret.

Yes, I realize this seems way too simple. But that’s really it.

His story is different than most of ours.

I don’t mean he lies to himself about what happens day to day. And I don’t mean bad stuff doesn’t happen to him that makes him sad, angry, or annoyed. I mean he gives each moment a different meaning than rest of us.

When he wakes up, he views the day as an opportunity. An opportunity to grow, to create greater connections, to have experiences, to be excellent, and to serve others.

Today is not a rinse and repeat of yesterday or of tomorrow. It is its own thing. And whatever it brings will be particular to it, and that is awesome.

So happy guy attacks the day with an inquisitive mind, curious to see what it will bring and what he can get from it.

That mindset bleeds into the rest of his day. And it has two big effects on how he lives it:

He has perspective—little things don’t bother him, they are just things to observe and move on from. So, the coffee spill, the one-day-delay on the report, or the guy that honked at him at the light, none of it bothers him. He recognizes what matters and what doesn’t.

He rarely, if ever, sees the events of the day as a sign that things are going to end badly. He almost always believes that, while the path may not be clear and may have twists and turns, everything will work out.

It isn’t because he is just blindly optimistic, it’s because he views everything as an opportunity to grow, learn, and move forward.

And when everything that happens gets you a step closer to where you want to go, you can’t help but believe you are moving toward your desired outcome; it’s the only logical conclusion.

How you can become that happy person that confuses everyone?

1. Daily smile scavenger hunt (may sound corny, but it works).

Every day, find five things that make you smile, and do it as soon as you can. Write down what time you hit number five. Try to break your personal best every day. Look at each day as an opportunity to win this game with yourself.

Why does this matter: You will increase your ability to recognize the little things that make you happy, the things that we mostly overlook in the rush to get to this place or to do that thing.

And, after a while, it won’t stop at five. You will keep doing it all day long habitually.

And this will get you in a mindset that better prepares you to deal with the guy that honks at you or the person that drinks the last of the coffee without making a new pot. It will give you perspective.

For example, here are my five things from today:

2. Cheat and rig the game of life to win early.

Like I mentioned before, a huge piece of why some people that have a happier baseline is that they view the world optimistically.

To start gaining that mindset, and have it carry through your day, it’s critical to get early wins and, almost more importantly, avoid early failures.

Yes, I said avoid failures. Does this mean run scared from all challenges before noon? Absolutely not.

What I mean is, don’t set yourself up to fail from the start of the day.

If you struggle to get up at 7:00am or 8:00am, getting up when it’s dark at 5:00am to do something that you likely view as hard probably isn’t going to work. You’re setting yourself up to fail, and what’s worse, you’re doing it to start your day.

If you do that, you will probably drag yourself up at 7:30 or whatever time, and you will have already missed two goals for your day, getting up at 5:00am and whatever the thing you wanted to do when you got up was.

So you view the day as a failure before you even start it. Now when challenges happen throughout your day, you are far more likely to view them as difficult, overwhelming, and generally pessimistically because your mindset is that the day is a failure.

So don’t do that.

Instead, set yourself up to win in the morning. Set your goal as something that doesn’t take a mountain of will power right from the start.

And then, rig the game.

Whatever you are trying to change, do your work the night before so that in the morning, you are destined to win.

For example, let’s say you want to eat breakfast at home instead of picking up some unhealthy food on the way in to work or eating a muffin or donut once you get there. Prepare the breakfast the night before, so that all you have to do is eat it, or at a minimum warm it up.

For example, for me, a healthy breakfast is coffee, eggs, and a side of avocado.

So, to set myself up for success, the night before I can get the coffee maker ready to go, crack a couple eggs, scramble them, cover them up, and then pop them in the fridge.

In the morning, all I have to do is turn on the coffee maker, toss some butter in a pan and pour the eggs in, and, in the two or three minutes it takes the eggs to cook, get some avocado. Five minutes total, and I have a healthy breakfast. Easy peasy.

But if I started from scratch, the whole process would take longer, which in my mind would mean I have to wake up earlier or leave the house later to do it. Neither of which sound like great options, so I would likely just skip it. Thus, starting the day with a failure.

Why does this matter?

Getting that win early frames your day. It makes your story about winning and gives you momentum. You will begin to view things less as a hindrance, and more as opportunities to keep winning, to grow, to move toward your goals.

And combining winning each moment with a more attuned sense of the little things that make you smile will make you much less likely to spend so much energy getting riled up about little things that used to annoy you and much more likely to have an optimistic view about how things will turn out.

And soon you will be that happy person that confuses everyone.

And “fine” will no longer be sufficient to describe your life.

Think back on today, what are the first five things that made you smile and what time, approximately, did the fifth one happen? Put your time in the comments. Can you beat my 8:58am?

51 Things That Will Make You Smile

True Connection Happens When We Release Cynicism and Judgment