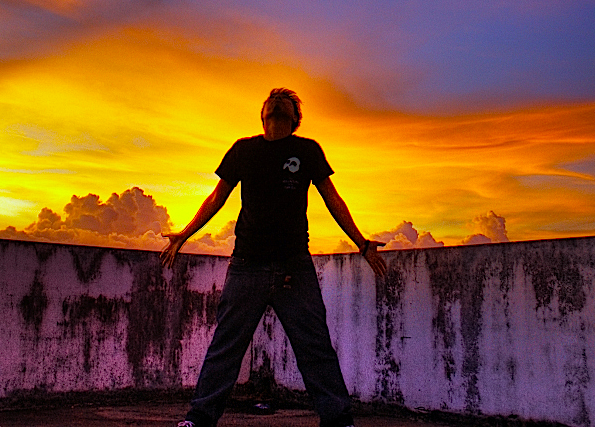 “Sometimes in tragedy we find our life’s purpose. The eye sheds a tear to find its focus.” ~Robert Brault

Just over two decades ago, I happened to be planted in the Midwest. Chicago. The southside to be exact. A location once recognized as a haven for successful black people handling their business while their kids frolicked throughout the streets, making up secret handshakes, basking in the sun and enjoying their youth.

And then, as the years progressed, things began to change; our haven was becoming less safe.

As if a nebulous cloud began to form over our neighborhood with a torrential rainstorm of bullets impending, some parents forced their children to stay inside as the lightening and thundering began to rain down.

The unfortunate news is that some children of varying generations were left out in the storm, with many, many lives lost due to senseless violence. And I wondered, “Why me?” Why do I deserve such shelter while so many of my brothers, sisters, aunts, and uncles must brave the storm and suffer?

You see, I may not have grown up with the riches of the world, but I was indeed wealthy—inundated with support, guidance, education, and love. I was recognized as “one who would make it out,” and indeed I did, but not without the scars, physically and emotionally, to show for it.

As I journeyed forward, attending a top twenty university, my erudite persona led many of my classmates to believe that my younger years were a cake walk—that I must have come from a rich, wealthy and white neighborhood. But in fact, I was born amongst my own, tender brown, beautiful skin.

But still, my peers did not believe me. I was in a battle. Lest did I know, it was much with myself.

So I began to fear and hate where I was from so much that I often cried to my mother, screaming that I did not want to return home during the summer months. But I had to anyway. So I did—in mental steel shackles—going straight from work to the gym to home everyday in fear, feeding the hunger of my hatred even more.

I was such a frustrated young man who had the world in the palm of his hands, but who had not yet recognized its power.

It wasn’t until I began traversing that palm that I realized there was a much bigger world out there and that many more people had gone through far more than me, and interestingly enough, still had enough umph to persist and fight on.

So I decided to give it a shot. Try it out. Test it out and venture to places, near and far away, discovering more of the world while discovery myself. As I did, the pain of Chicago traveled with me. A few years ago, right after I moved to the Dominican Republic, I received this email on January 7, 2010 from my mother:

Hey babe. Some sad news, Cody was killed on Sunday right down the street. He was with Marlon in a car and a guy walked up and shot them both, but Cody died on Monday with 14 gunshot wounds. So sad. I love you.

And then later again that year, a few days after I followed my dreams of moving to Los Angeles, I received a phone call from my mother stating these words:

Marlon was killed just up the block from our house. He was with some people and someone came up and shot him in the neck and back. Be Careful. Love you.

Out of all the people in my life that had passed on, why were these two more significant?

Sure, we did not stay in the best of contact past high school, but we shared something much stronger—something much more powerful: childhood dreams.

As we played football and baseball in the abandoned lot directly across the street from my house, we dreamed of growing up to become the likes of Randy Moss and Derek Jeter. We had huge dreams—dreams that we knew would one day come true.

But after I lost both of them, the dream deflated and the big question: “why me—why am I so freakishly blessed?” returned, until I was asked an even greater question: “Why not you, Alex?”

Instead of counting your blessings and asking why you are so blessed, why don’t you live a life focused more on sharing those blessings?’

“Sometimes in tragedy we find our life’s purpose. The eye sheds a tear to find its focus.”

I cried a lot and it was not until others helped me meditate upon it and realize that all the bad and unfortunate events in my life could be leveraged as lessons to help me, instead of destroy me. And indeed, they did, but it took time—years.

The shedding of those tears did in fact help me find my life’s purpose while understanding life’s purpose, which is to teach us, to expand us, to challenge us, to grow us—to evolve us to show us that nothing is permanent in life, and to be grateful for this year, this day, this moment.

Gratitude, once taken into practice, can change your life.

And now, I can honestly look back with a better understanding of my past while holding gratitude for what was and what is. I choose to trust the struggle moving forward, because the more I go through and learn, the more I can help others.

And the same goes for you. You have the power to help others.

So today, I ask you: what lessons have you learned from the hardest times of your life and what would you say to the person who is going through something similar right now?

Because I guarantee there are some individuals reading your comments that could really use the love and encouragement.

This article is dedicated to Cody, Marlon, to the children of Chicago (of all generations) and to the world.

Currently traveling the world with the intention of building a stronger foundation in order to better serve those around him, Alex Echols is considered to be quite the adventurer. He is a published author, coach, and the creator of the One Life Brand and his adventures can be followed at www.facebook.com/aaechols and instagram: alex_echols.