Transform Your Relationship by Assuming the Best Intentions
By Betsy Talbot 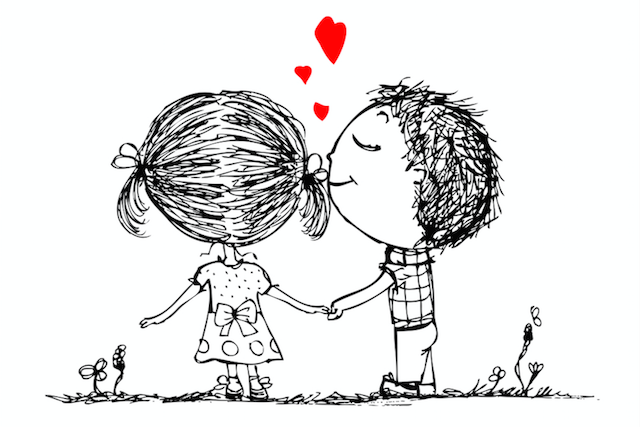 “Happiness is a conscious choice, not an automatic response.” ~Mildred Barthel

I used to think he was out to get me. The man of my dreams was continually plotting to undermine my happiness in countless ways, all for some mysterious reason I couldn’t comprehend.

“Can you give me a ride to work today?” He missed his shuttle on the morning I had my first speech, a forty-five-minute drive in the opposite direction. He obviously didn’t want me to succeed in my career.

“Are you wearing that tonight?” Oh great, just before we go out to meet friends for dinner he wanted to throw off my confidence in how I looked. Did he think I was getting fat?

“Can you come help me with this?” Couldn’t he see that I was in the middle of a relaxing Saturday morning, my first bit of sanity after a very stressful week? He must not care if I got any down time, though you could bet he’d be sitting on the couch watching golf all afternoon.

A lot of my time was spent stewing, working over these scenarios and replaying them in my mind. Overthinking was my specialty, my calling card in life. I prided myself on seeing things other people missed, reading between the lines to get to the “real” meaning.

These little bits of drama took a lot of mental effort for me to concoct, but after a while I became really good at them. I could summon up a motive from his every glance or change of tone, sometimes simply from thin air.

Nevermind that I still considered him my dream man, just one with the not-so-adorable quirk of trying to undermine happiness.

What did that say about me?

Like most of my uncomfortable feelings, I pushed these thoughts down, working to keep things cool on the surface while I boiled underneath.

Life kept moving forward, and then one day my brother had a heart attack. A year later, a friend had a brain aneurysm. Both survived, but it changed our mindset about time and dreams.

We decided to sell everything we owned and travel the world, taking our retirement dreams and living them at midlife instead, when we had the health and energy to enjoy them. It was a beautiful time, planning our grand adventure and then stepping into it together.

But still, I had these nagging thoughts about him and his continued efforts to rob me of my happiness, even as we were living out our biggest dream. Looking back, it was pure insanity.

“I read about this site in Northern Peru that’s supposed to be really cool. Want to go there next instead of Machu Picchu?” He knew I was dying to go to Machu Picchu. Why would he try to take that away from me? He didn’t want me to be happy.

“Why don’t you write in the early mornings so we still have the days to explore Edinburgh together?” He knew I wasn’t a morning person, so why would he ask such a thing? Because he was a morning person, that’s why. He thought I was lazy.

“I’ve been editing the podcasts and you say “this and that” a lot. It detracts from the message. Can you tamp it down?” Hey, I just got a compliment from a guest on my radio voice. Why was he nitpicking like that? He couldn’t stand it that someone said something nice to me.

None of my thoughts were said out loud, but they did needle at my happiness in small bursts multiple times a day. We were rarely apart in this traveling lifestyle, especially when we started publishing books and podcasts together, and I found an ulterior motive in almost everything he said. Over time, my brain almost melted at the continuous effort required to read into his every word. It was a full-time job.

Then a very big fight happened, one of those life-changing arguments, and I let the cat out of the bag. He was stunned.

At the end of all the harsh words and tears this was a revelation, an insight into this years-long issue in our relationship.

All those years of reading between the lines, a skill I’d honed since childhood, kept me from seeing reality. I was ignoring the black and white meaning of what he said in favor of some imagined murky gray story with no basis in fact.

My writer’s mind was altering my own life story, as it happened, without the consent or knowledge of the other main character. I was changing a light-hearted romance into a mystery and painting my husband as the bad guy.

In the aftermath of the very big fight, we agreed to always assume the best intentions of the other person, no matter what words were chosen in the delivery. Instead of picking apart how it was said, we would focus on where it came from, which was always from the heart.

Questions were encouraged. Clarification was required. No guessing games allowed.

It was surprising how fast this one change impacted my outlook. I stopped spinning crazy stories in my head and focused on the moment, what this man who loved me was trying to convey. When I didn’t understand, or the understanding I had was negative, I asked for clarification.

He always freely gave it.

He wanted to see everything in the world with me. He wanted me to have time to write, but also to play together. He wanted the work we produced to be as professional as possible, and he knew we both had quirks to overcome.

The meaning was there in plain sight, in the honesty of his words. He wanted the best for us in everything, as anyone in love would.

He wasn’t out to get me. He was out to love me, to share a life with me, and all I had to do was take him at his word.

How to Train Yourself to Assume the Best Intentions

1. Every single day, compliment or thank your partner for something they’ve done.

Make gratitude for what they do right an everyday thing and the occasional slipups will not seem as big. It also reinforces positive behaviors, making them more likely to continue.

2. When your partner says or does something that rankles you, first stop and ask yourself if a stranger in the room with you right at that moment would have the same reaction.

If you’re overthinking, you will have added layers of meaning that aren’t there. But if you look at it from the outside, it’s a more realistic version of events. It will help center you.

3. If all else fails, ask for clarification.

“I may have taken this the wrong way. Did you mean X?” This gives your partner the chance to clear it up right away, before you’ve had a chance to concoct a story in your head.

It will take some time to train yourself from overthinking and reading between the lines, but it can be done. And you (and your partner) will be happier because of it.

Editor’s Note: Betsy has generously offered to give away two copies of her new book Married with Luggage: What We Learned about Love by Traveling the World. To enter to win a copy, leave a comment below. You can enter until midnight PST on Monday, Monday, April 28th.

Update: The winners have been chosen: ccrgirl and Joy Olson.

Betsy Talbot and her husband Warren are the authors of Married with Luggage: What We Learned about Love by Traveling the World. To celebrate this new book, they’ve partnered with Eurail to give one lucky couple two first-class train passes to experience the romance of Europe. Could it be you?

Stop Focusing on Your “Flaws” and Let Your Light Shine Bright