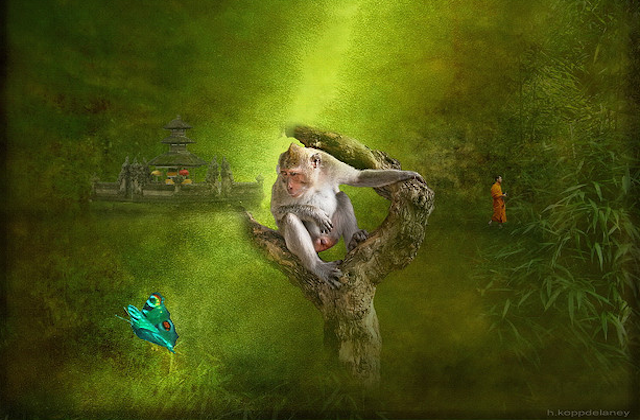 “I know but one freedom and that is the freedom of the mind.” ~Antoine de Saint-Exupery

I grew up in what I like to call The Box of Daughter: a rigid structure of rules about values, beliefs, thinking, feeling, and behaving, set forth for me by super-religious parents who grew up in boxes of their own.

For a large part of my life, my thinking bounced around within the confines of that box—worrying the old worries, thinking the old thoughts, feeling the old pain, and acting out pretty much the same compulsions time after time—stuck in ever-repeating loops of monkey mind.

I’ve always loved reading about quantum physics and marveling at the infinite possibilities in the universe. But I couldn’t seem to get many of those wonderful possibilities to happen in my life because I was stuck in that old structure, the childhood voices bulldozing their doubts, fears, and negative mumblings right over what I was trying to create.

As I’ve endeavored over the years to deepen and expand my spirituality, I’ve connected more and more with the divine creative force, the constant, growth-oriented creative energy of life. “This is how I’m meant to live,” I would think, and then I’d go right back to monkey mind.

I’ve come to believe that there must be a purpose for monkey mind—that nature intended for us to do something with it, that it’s not simply an aberration that evolved in us as life got more complicated.

One night in the bathtub (which is where I do my best creative thinking), I noticed a correlation between the constant flow of creative energy in the Universe and monkey mind, which is a also constant flow of energy—but in my case, energy that’s ricocheting off the inside walls of the mental box I grew up in.

After my bath, a hypothesis bloomed in my mind that monkey mind might be a twisted form of what nature originally intended to be constant creative thought.

My mind turned to one of my favorite pastimes, puttering. When I’m puttering, my mind often flows from one thing to another, seemingly at random, and I usually feel like I’m smack in the now—dealing with one task, then another, in any order I choose to. It may not necessarily be truly creative, but there is a forward flow that I don’t experience with monkey mind.

When I’m in monkey mind, there are usually only a few selected thoughts going through my mind, circling around and around, bumping up against each other in their rush to be first. There’s no forward movement. I suppose it’s a form of creativity; however, I’m a little fearful of what I create when I’m in monkey mind.

I’ve been tinkering with different possibilities for manifesting what I want in my life, and that’s led me to discover a way to get out of monkey mind and into creative mind, which not only brings me right into the now, but opens my mind to more and more and more possibilities.

It’s sort of like the same type of circling thought, but it never returns to the starting place on the circle. The thoughts do not repeat themselves—they curve around from one possibility to the next, to another idea, another way, another dream….

When I’m working on a task that I hope will encourage something I want to manifest, if I let my creative mind jump from possibility to possibility (“…and then what? And then what happens? And what else?”), I’m able to keep jumping over that little doubting voice that used to create most of my reality (“…it’s not happening, it’s not going to happen, it won’t happen.”)

As long as I stay in that creative mind, jumping from one possibility to the next like the image I have of a fractal (winding out into more designs and spirals of possibility), that little doubting voice doesn’t have a chance to interject its repetitive thoughts.

As long as I don’t go back to square one, monkey mind doesn’t get me.

I’m sure the divine creative force is out there saying to itself, “And what else can I create? What does this make me think of? And what other possibilities might there be?”

That’s how I think nature intended us to use monkey mind. I can’t imagine It thinking, “Wait, I have to go back and check that flower…Whoops, that tree isn’t quite tall enough… Maybe I shouldn’t have created that volcano…”

Creative mind is similar to the way I remember thinking as a child: “Why do bumblebees buzz? What do they feel like? Ouch!!”

But once we get into school, we’re essentially trained to think in monkey mind: reciting facts over and over to commit them to memory, learning the rules of English and using them every time we write (even when we’re writing creatively), and even sometimes having our physical play at recess structured into games full of rigid rules.

So here are a few tips for getting out of monkey mind and learning what creative mind might feel like inside your head:

1. When doing a repetitive task like washing the dishes, try enumerating to yourself in your mind every step that you’re taking, and start inserting new thoughts.

“Putting soap on the sponge, rinsing the plate, I wonder who made this plate, rubbing the sponge in a circular motion, and could I rub it the other direction? I wonder what country this sponge was made in, and how are sponges made anyway?” Keep pushing yourself to come up with new thoughts. Don’t let old familiar ones edge their way in.

2. When you’re making efforts to manifest something in your life, don’t stop with the first picture you get. Keep expanding it.

“And then what? And what would that mean? And what could I do with that?” Draw other things into the visualization or energy output that aren’t necessarily related in order to keep expanding your vision: “And maybe a surprise would happen, and my health could be better, and I might live somewhere else…”

I find when I’m trying to manifest that if I try to hold a particular vision for very long, that little doubter elbows its way in and starts telling me how it’s not going to happen. That’s because trying to hold the vision means I’m fixating—same thing as my monkey mind going around in a circle.

I have to keep changing the vision slightly (preferably growing it) in order to stop fixating, and that prevents the doubter from getting a handhold.

3. Go for a walk and talk silently to yourself about what you see.

“That tree’s a little crooked. It’s taller than the others. I saw a bird go by—wonder what kind it is? Sure are a lot of weeds here. I wouldn’t be driving that fast on this curvy road. I can feel my knees every time I take a step…”

Keep your focus moving, so it doesn’t settle inside your mind. Getting into your body is a great way to get into the now.

4. When you’ve got the feeling, try it with creating.

It’s a little tiring the first few times you get into it, but it “uses up” that monkey mind energy so you can rest afterwards. It does take practice. But I believe from the bottom of my heart that it puts us into powerful alignment with the divine creative force.

It’s so much easier to keep the mind moving along a creative path than it is to try and shut out negative thoughts. Who knows what you’ll come up with? See if you can get into creative mind, and you won’t have to not think about that elephant that’s not in the room.