Watch Me Dance: Why I Stopped Playing Small and Hiding from Life
By Damatia GIpson 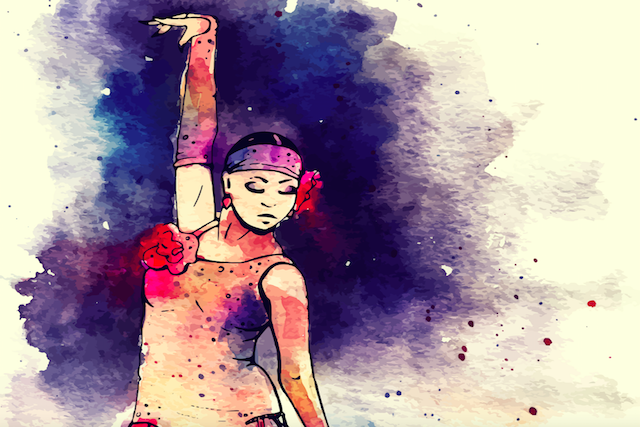 “There is no passion to be found in playing small—in settling for a life that is less than the one you are capable of living.” ~Nelson Mandela

When I was a kid I’d get up early on Saturday mornings to start my routine, which ended with a few hours in front of the television watching my favorite shows. After the cartoons came dance shows featuring the popular musical acts of the time. I’m in love with music and I have been all of my life, so these shows in particular excited me and made me feel like dancing with joy—and I did!

I always had a great deal of energy. I loved riding my bicycle, playing hide-and-go-seek with my friends, and dancing. Despite always being overweight (since weighing in at eleven pounds at birth), I still managed to keep up rather well with my smaller, super active peers.

Warm weather meant lots of outdoor activities, and I even looked forward to physical education class, particularly when we could exercise outside.

School provided a new, tougher atmosphere for me, though. There were always “those other kids” who would remind me of my weight in the midst of my fun times on the slide or running around the school yard.

I thought they were mean and hurtful just because they didn’t know me. If they knew how I loved to laugh and sing and dance and play, they’d surely be my friends too, right? Maybe not.

I remember the first time words from one of “those other kids“ changed how I felt inside. It was the first time I knew the power of words—unfortunately, at the time, being used for harm.

The feeling confused me at that age and was the first crack in my inner mirror. Being teased back then changed my energy and altered the bliss that I felt when I was ignorant about how much someone’s words could hurt. “Those other kids” wanted me to feel bad and I didn’t understand that. Even worse, I changed how I viewed myself.

That crack remained as I absorbed those words and brought them home with me. It became a full break when some of those words hit home for me there.

On this particular Saturday, I was watching my shows and I proceeded to dance as if I was in the studio with the others. I turned up the volume and shimmied and shook as if the camera was headed my way next.

My oldest sister came in and said a few things that I wasn’t paying much attention to because I was focused on my performance. Then she blurted out, “…and sit down! You’re too big to be dancing around like that!”

Her words tore through me like a knife. I loved my big sister. She was mean sometimes and I didn’t like when she didn’t want me around, of course, but when she was nice, she was really nice, and when I could be around her I loved it. But now she sounded like “those other kids.” And she knew me. She was my friend already.

I remember slowly finishing my dance and then turning off the television.

I haven’t danced so freely in the forty years since.

That message remained as I grew but took on a different voice—mine. I would quietly analyze all of the experiences that I felt I was “too big for” and find clever ways to avoid fully engaging and participating.

In junior high, I was a girls’ basketball team manager who filled water bottles and recorded stats instead of trying out to play for the team.

I was in my high school band, but learned to play a different instrument when competition became too stiff in my section.

At work, I was always the one who worked harder, faster, better, but remained passive when I wasn’t promoted or considered for salary increases.

Even socially, I usually sought the company of those with larger, louder personalities that were easier to hide behind. Many opportunities to step on life’s stage culminated in paralyzing stage fright fueled by negative self-talk and overall feelings of inadequacy.

I minimized the rest of myself because my body wasn’t minimal.

Many years had passed before I realized that repeating negative messages to myself drastically lessened my effect. My own cruel inner voice did much more damage than anyone else’s words ever could.

As an adult, my weight struggles continue. But I now have a greater understanding of the life-altering power of words heard from others, and also those I speak to myself. There is no other voice as important as my own. I had to go back to the basics to get that, though, and on that journey found even more.

Along with “doing unto others as I’d have them do unto me,” I also strive to do and speak unto myself what I want done and spoken by others. I know now that the “selfs”—self-esteem, self-confidence, and self-worth, along with self-acceptance—truly are inside jobs. Cracked or broken mirrors still show you a beautiful reflection when you stand in the right position of self-awareness.

Self-awareness came to me through a great deal of self-assessment. I’d mistakenly taken on the opinions of others as my own, but as I matured emotionally and spiritually, I knew I didn’t need to see myself through their lens. And I knew I didn’t want to, because in hiding to avoid showcasing my flaws, I ended up concealing my gifts.

I also realized we’re all quite similar. We all have things we’d rather hide, and we’ve all been on the receiving end of unfair judgment at some point in time, if not for our bodies, for something else.

I no longer compared myself to others when I realized that each one of us is human, fallible, and flawed. With that realization, I stopped punishing myself for my imperfections and mistakes and decided not to hold myself back because of them. Maintaining perspective helped me stop being overly affected by condemnation or praise from others and highly critical of myself.

I found it most important that I spoke well of and felt good about who I was becoming.

Though quite simplistic, the full grasp of this awareness allowed me to see myself and others differently. It began my path to self-acceptance and “those others” became people in need of acceptance, as well.

I’d spent decades spackling and caulking my ego after being hurt both intentionally and not, by others and myself. It has been a steady chore to find just the spot that enables me to see clearly my own image, but, through acceptance, I finally do.

I’m excited about who stares back at me now with the same simple joys as that free-spirited girl on a Saturday morning.

Now, I make sure having great energy is my goal. I try to put it in my words to live harmoniously with myself and others.

I take steps to speak from love and remain aware of my intention.

I’m a devoted relative, thoughtful friend, and compassionate, respectful person. I love hard, smile continually in gratitude, and have joy in my spirit so my very soul tends to dance. It’s too big not to.

Damatia is the forty-something year old mother of one grown man, sister of three, who was parented by two. In her career, she works with numbers. She has always had profound respect and love for words, music, and the harmony they bring. She honors them and consistently seeks ways to be more like them.

When You Dance with Discomfort, Surprising Things Can Happen