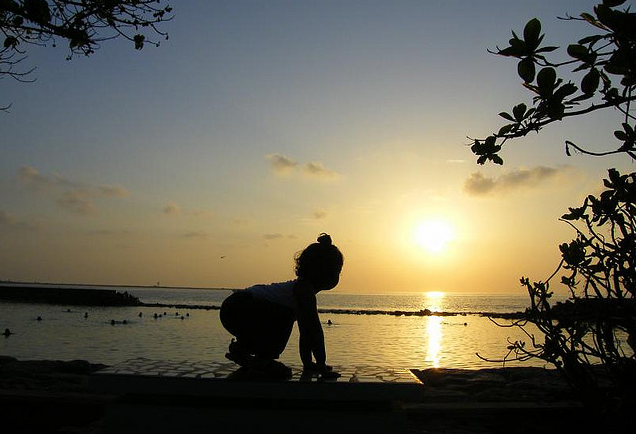 “The intensity of the pain depends on the degree of resistance to the present moment.” ~Eckhart Tolle

The nurse found me slumped behind the soda machine.

“Honey, are you okay?” she asked, brow crinkled in nervous response to my (apparently louder than I’d realized) sobs.

I nodded, answering in messy sniffles. The nurse, not entirely convinced, assured me that if I needed anything, she’d be at the desk just around the corner.

I remained crouched in my not-so-perfect hiding place a while longer, waiting until my breaths no longer shook to trudge back to my mom’s hospital room. The news was not going to be fun to break.

I was officially a deadbeat.

For context, I’ve lived most of my life as a success junkie. I was the token overachiever during every year of education, at every job, in every hobby; being impressive was my forte.

This mindset fueled plenty of remarkable endeavors—some thrilling and fun, some terrifying and painful—all of which were tied to my own self-image.

I’d just left a dream job in music marketing, which had only developed after years of radio programming and slow, meticulous relationship-building with industry contacts.

I’d worked my butt off at that position, trading unlimited access to up-and-coming music and a constantly revolving social life of shows, happy hours, festivals, hangouts with bands, and client dinners for adequate sleep/nutrition/self-care. (This workaholic behavior made me worthy.)

After ultimately deciding that music marketing wasn’t the core around which I wanted to build my life, I’d begun revisiting my previously abandoned plans to live and work abroad.

I’d applied, applied, and applied for jobs throughout Asia, finally accepting a position in South Korea. (Quitters are unworthy; a next step in place kept me safe and still worthy.)

I’d somehow worked up the courage to notify my bosses, go public with the decision, and pack up the life I’d built from scratch over the past five years. (This made me crazy, but with a next step firmly in place, I stillremained “worthy.”)

Then, during my final week in the office, I’d received the news that my mom had cancer. And so I quickly found myself on a plane back to the Midwest, where, thankfully, I was able to support her through the surgery and recovery process.

Now, however, here I was mere hours after her operation: crumpled behind a soda machine, trying to process the phone call with the Korean Consulate that had just shattered my worthiness in a span of about five minutes.

“Miss Suellentrop, there is a problem with your paperwork. You’ll have to mail us XYZ additional forms if you want to apply for a work visa. We’ll have them processed by next month.”

But my start date is in two weeks—I can’t miss it!

And that was that. A handful of sentences had taken away my employment, my painstakingly laid plans for the next twelve months—and my fragile self-image right along with them.

You willingly abandoned your edgy, cool life on the East Coast, I told myself. You are a failure.

You quit your secure, impressive job. You are a failure.

Everyone will know you’re a deadbeat stuck in a suburban town. You are a failure.

You’re balled up behind a soda machine and haven’t showered since Monday. YOU ARE A FAILURE.

I shuffled back to the room to share the update with my family, voice choked with embarrassment—both from the fact that I now had no job in place, and from the fact that while I was suffering an identity crisis based on outward appearances, Mom was recovering from major invasive surgery. In the spectrum of tough-to-handle circumstances, cancer tends to trump most other things.

After a few moments of quiet, my beloved, endlessly wise, still heavily medicated mother said, “Claire, when babies fart, they don’t freak out or worry that they aren’t good babies. They feel it, they let it happen, and then they let it go.”

They let it go.

When circumstances beyond our control make life smelly, we don’t need to hold onto them any longer than a baby holds on to its farts.

Rather than allowing those circumstances to define who we are, all we need to do is acknowledge the thoughts and emotions they trigger, accept that they’re happening, and let them go.

Stifling the emotions that spring forth won’t ease the situation—when is holding gas in ever the more comfortable option?

Emotions are nothing more than the results of the thoughts you’re having about the circumstance. Like gas, they’re just noise passing through. Feel them, as fully as you can, and then they’ll be able to fade.

Pretending the circumstance isn’t happening is equally as fruitless. You can pretend all you want that you didn’t let one rip, but the room will still reek. It’s just an event that occurred—something totally neutral and temporary. It doesn’t mean a thing.

Why try to label yourself by something ethereal, something brief?

Feeling bad does not make you a bad person, and receiving embarrassing news or an unexpected result from a long-held plan does not mean you are unworthy.

If you find yourself reeling from an outside event or rushing to block out an unwanted wave of emotion, pause for a second.

Identify whether you’re trying to hold something in, pretend it doesn’t exist, or let it define you.

Once you’ve got that down, revert back to your baby self:

Feel it. Let it happen. And let it go.

Simple Truths About Toxic Mothers I Wish I Knew Growing Up