What Is Stress-Induced Illness? How Trauma Can Cause Physical Pain
By Jeremiah Kalb 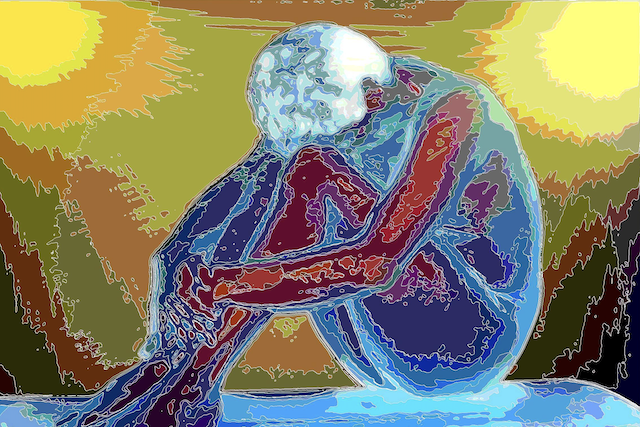 Three years ago, I fell into the blind spot of medicine: America’s unknown epidemic.

After numerous tests, scans, scopes, and too many doctors to count, modern medicine could not find anything seriously wrong with me. I also consented to have my gallbladder removed. My first and only surgery at age forty, an “experiment” of sorts.

Six months into the worst nightmare of my life, my spiraling health started to take a huge toll on me physically, mentally, and emotionally. I didn’t want to live anymore, but I was too chicken to take my own life.

They Cannot See the Forest for the Trees

If just one doctor had paid closer attention to my backstory and probed it further, the diagnosis would have been obvious and the treatment plan effective. Here’s the problem: My doctors were only focused on my presenting symptoms and not on my whole being.

Of the twenty-six symptoms I experienced, the constant bladder pain was the most excruciating and difficult to deal with. Imagine a UTI that never goes away. Nothing could knock it down.

The pain took me to the edge of wanting to take my life many times. At one point, I told a doctor that I would give him my entire 401k savings if he could make the pain go away.

It’s Time to Surrender and Trust the Process

In September 2021, I surrendered to the pain and requested a referral to an academic medical center after fighting it for nearly two years. Somewhere along the way, I made the conscious choice to walk with the pain instead.

I quickly learned that doctors specializing in pain medicine do not try to cure pain, but they try their best to equip patients with strategies to cope with their pain. Along with the things my pain psychologist taught me, he encouraged me to reacquaint myself with Curable, an app I had actually loaded onto my phone almost a year prior but had quickly dismissed. Stupid mistake on my part.

Addressing pain at an emotional and psychological level did not make any sense to me. After all, I had a structural problem, not a brain problem—or so I thought.

Fortunately, during my second round of trying the Curable app, I discovered Howard Schubiner MD and one of his colleagues, Alan Gordon LCSW, a psychotherapist specializing in the treatment of chronic pain through pain reprocessing therapy (PRT).

Dr. Schubiner is the founder and director of the Mind Body Medicine Program at Providence Hospital in Southfield, Michigan. His program uses the most current research methodologies to treat individuals who suffer from the mind body syndrome (MBS) or tension myositis syndrome (TMS), as described by Dr. John Sarno.

What is mind body syndrome? I’m going to answer this in a second, but first I need to take this story back to my childhood. This is where the story gets very interesting and revealing.

The Haunting Effects of a Bad Childhood

As I started to dig deeper, I was introduced to the landmark 1998 ACE study that, as its abbreviation indicates, explored “adverse childhood experiences.”

The ACE research concluded that the more adversities a person experienced as a child—whether it be a parental death or incarceration, poverty, neighborhood violence, or abuse—the more likely that person would be to suffer from serious physiological disorders as an adult. I had six childhood adversities: a household with substance misuse, violence, divorce, severe poverty, neglect, and incarceration of a parent, all at or before the age of ten.

I also discovered a recent meta-analysis showing that individuals with a history of psychological trauma, regardless of the type of trauma, were almost three times more likely to have chronic pain than those who had experienced no trauma.

Translation: As a child, I was threatened repeatedly—not physically, but emotionally—causing my body to have a stress response. This prepared my body to fight or flee. Because my body stayed in this stress response mode for an extended period of time, crucial neural connections in my developing brain most likely suffered damage, causing me to be hypersensitive to stressful events.

In other words, my alarm switch is always “on,” unless I can lower the perceived danger in my brain. My divorce was just the tipping point to my spiraling health.

The Day the SWAT team Visited My Home

To illustrate how inept society was in the early nineties at addressing emotional trauma, I only need to point to one early morning when the SWAT team jumped my backyard fence and pointed their submachine guns at me while I was feeding our family dog, Smokey. Their target was my dad (he sold drugs), but he was nowhere to be found.

He had been out partying all night and had yet to return home. I was the only person home at the time. A scared shitless ten-year-old boy. I liked watching the reality show Cops, but this was completely surreal.

This is the crazy part. The SWAT team left me in the backyard and told me to go to school, like nothing had happened. I never spoke to a counselor or therapist about this frightening event.

I grew up thinking it was normal to not talk about emotions—or scary things like being stuck in the middle of a drug raid, alone and helpless. I grew up real fast that day.

Mind body syndrome, or psychophysiologic disorder (PPD), is a certain diagnosis arising the majority of the time in the absence of tissue or structural damage in the body, when nerve pathways become continuously or intermittently activated by past or current life stressors.

The Psychophysiologic Disorders Association states that the symptoms of PPD are due to altered nerve pathways in the brain that affect the body. Symptoms can include headache, back pain, chest pain, muscle or joint pain, abdominal or pelvic pain, constipation, diarrhea, bloating, nausea, irritable bowel syndrome, discomfort in the bladder or during urination, fibromyalgia, chronic fatigue syndrome, and many other symptoms.

To illustrate how inept today’s doctor is at diagnosing a psychophysiological disorder, I only need to point to my first-ever encounter with a board-certified gastroenterologist in March 2019. Gastroenterologists are doctors who are highly trained to diagnose and treat problems in the gastrointestinal (GI) tract and liver.

Basically, they get paid handsomely to look up people’s butts and take pictures all day long. If you ask me, it sounds pretty mundane and not all that creative. The best news you can receive after getting one of their colonoscopies is that you really didn’t need the procedure after all.

To help remedy my bowels that had gone haywire (the first of my many symptoms), I anxiously took the slot of the next available doctor at a nearby GI clinic. While on the examination table, I related that I was smack dab in the middle of a horrible divorce and in a lot of emotional distress after being in a dysfunctional marriage for the last ten years.

The doctor’s response? Nothing. Zip. Nada. You could have heard a pin drop in the room. Instead of acknowledging my unfortunate circumstances, this dimwit doctor went about the rest of his examination and acted like what I had shared with him was the most benign, most boring thing he had ever heard in his life. By my definition, this was a moral injustice.

News flash: The Holmes-Rahe Stress Scale indicates that divorce is the second highest stressor for humans, second only to the death of a spouse.

I had secretly wished that my doctor was going to validate my emotional trauma and scars and identify them as the cause of my bowel changes, but his lack of a response only reinforced the fact in my brain that something was structurally wrong with me. And so that’s the path I went down for nearly three years, trying to find something structural to explain one unexplainable symptom after another.

When I say I turned over every stone, I really did.

Remember, I was desperate and willing to try almost anything. Everything except the butt gas. It’s basically ozone therapy gas that is administered into the body. In my case, I would have given it to myself through my butt.

I can’t help but laugh when I recall the day I was first presented with this option. This is what my life had become. Wacky alternative therapies.

In my career, I get paid to find solutions and fix problems. Fixing my health was no different, I thought. In my futile attempt to fix my health, I flushed thousands of dollars down the drain in the process and just about lost my sanity.

Can This Really Be Real?

Experts like David Clarke MD, a retired gastroenterologist and president of the Psychophysiologic Disorders Association, like to point out that one in six adults and 30–40 percent of primary care patients suffer from pain symptoms and chronic conditions that are “medically unexplained.” This is America’s unknown epidemic.

But wait. There is a silver lining that comes with all this unfortunate news. Once PPD is recognized, treatment is available and is often effective in alleviating symptoms. Dr. Schubiner likes to ask: “Why manage your pain when you can cure it?”

The Best Treatment Around

So how effective is the mind body syndrome treatment? Dr. Schubiner and his colleagues published an article not too long ago demonstrating that emotion-focused therapy was superior to cognitive behavioral therapy (CBT) for dramatic pain reduction in people with fibromyalgia, many of whom had experienced childhood trauma.

Dr. Schubiner and Alan Gordon also helped lead the recent study at the University of Colorado–Boulder that showed that not only can chronic back pain be managed, it can be cured using a mind body approach. In their study of 151 total participants, 66 percent randomized to PRT were pain free or nearly pain free at post treatment.

Once I heard this, I started to tackle my pain at the emotional and psychological levels. Along with somatic tracking, expressive writing, mindfulness, and reprogramming the brain, my favorite treatment activity has been intensive short-term dynamic psychotherapy (outlined in Dr. Schubiner’s book, Unlearn Your Pain), where deeply buried emotions of anger, resentment, guilt, shame, sadness, and grief are uncovered and released. Healing often occurs rapidly once these emotions are stabilized.

During this process of intensive short-term dynamic psychotherapy (ISTDP), I have taken several of my most incompetent doctors, and even my dad, behind the proverbial woodshed, and I have given them the worst tongue lashing they’ve surely ever received in their lives. Cursing is highly recommended and encouraged.

While I couldn’t literally slash the tires of the doctor who appeared earlier in this story, this was the next best thing. And it felt so good.

You might be wondering what happened to my dad. He eventually turned his life around, and I am so grateful for this.

Today, while my pain is not completely gone yet, it’s generally at about a two or three instead of a six or seven. I will take this any day.

As a sufferer of psychophysiologic disorder, Jeremiah is super passionate about helping bring greater awareness to this condition. Visit or encourage any medical provider to visit ppdassociation.org to learn more, including the steps that must be taken to make an accurate diagnosis of PPD and treatment options.