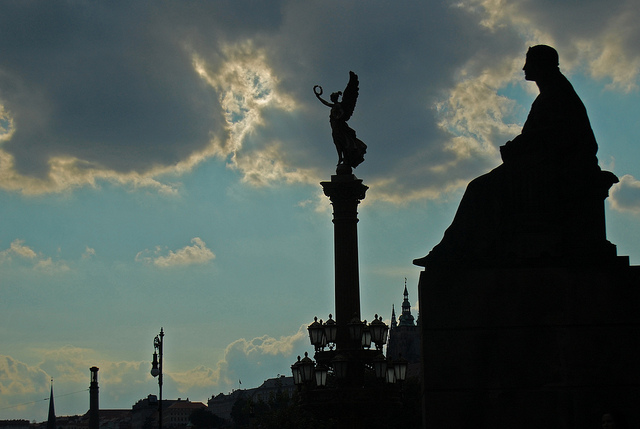 “Courage doesn’t always roar. Sometimes courage is the quiet voice at the end of the day saying, ‘I will try again tomorrow.’” ~Mary Anne Radmacher

That very moment, riding on the back of a motorcycle, the wind rustling my hair and cooling me down from the sweaty heat that envelops the Philippines, a truck smashed into my left leg and shattered my knee.

Choosing to leave for the Peace Corps program in the Philippines was the toughest decision I have ever made. It was a choice between my boyfriend and the dream I had worked so hard for.

When he refused to entertain the idea that we could try a long-distance relationship, I was torn. I couldn’t believe it; our relationship was actually coming to an end.

My boyfriend and I had insisted that we were soul mates and made plans for our future together. Yet, our plans revolved mostly around his carefree lifestyle.

His ultimate goal was to live on the beach and surf all day. Meanwhile, I silently craved to work in international development. We tried to figure out how my life goals could be molded to integrate with his. I ached for his approval and support, but ultimately he gave me neither.

He felt I was leaving him behind and questioned why I was doing this. Questioning my decision to pursue the Peace Corps demonstrates that he did not understand me, which is partly due to the fact that I rarely shared my life goals with him.

He seemed disinterested in my priorities, successes, passions, and interests not because he was a jerk, but because he didn’t comprehend them. Thus, I stopped sharing.

I felt he did not appreciate my ambitious nature, and maybe this is because he had no ambitions himself. And while lacking drive and ambitions is totally okay for some, it isn‘t for me. Our relationship allowed me to discover that.

I served in the Philippines for four months before the accident happened. Despite the myriad distractions and assignments I was given, I was still heartbroken and had a difficult time getting over my ex as I adjusted to this new life and culture.

After the motorcycle accident, I seriously believed that the stars had aligned and the universe was trying to send me home to get back with my ex.

Being hooked up to the countless IVs and ingesting painkillers every couple of hours certainly exacerbated my vulnerability. The truth was that I hadn’t stopped loving him; not a day passed that I didn’t think about him.

I underwent two knee surgeries while in the Philippines and was sent home to recover and re-learn how to walk with my left leg. I arrived in the U.S. exactly two weeks before the massive Typhoon Haiyan ravaged the province where I was stationed. I was so blessed to be home recovering, and it was becoming painfully clear that the stars had aligned for reasons other than my ex.

In fact, I slowly began to see this accident as a huge blessing.

First of all, I was alive and had not lost any limbs or my ability to think. Second of all, I had evaded the worst typhoon in the history of natural disasters. Third of all, the freak accident was clearly a red STOP sign that was going to force me to take care of myself and my needs before attempting to care for others, whether it was a boyfriend or the Filipino schoolchildren who I was teaching English to.

During the last two years before I joined the Peace Corps, I was robotically clocking in and out of my life. Before the Peace Corps, my daily routine consisted of traipsing from an exhausting codependent relationship that destroyed my confidence to an unfulfilling but stable (read: unchallenging and boring) office job.

I realized that I had rarely taken any time to myself. I had failed to stop and ask myself, “How am I feeling? Why am I crying so much? Why do I feel so drained after hanging out with my boyfriend? Do I really want to serve in the Peace Corps or is it an attempt to escape from my problems?”

Coming home to recover from my injury forced me to reflect on what I had just accomplished in the Philippines. It was a moment to offer gratitude to the world for giving me a source of internal happiness and the desire to chase after some more of it. Working alongside a new community in the Philippines and executing literacy projects gave me such a rush! I was happy.

Happiness feels good, and so does sticking to my guns and leaving my ex-boyfriend in the past. We spoke briefly when I returned to the U.S., but our conversations left me feeling bored and kind of sad. I recognized that I had to let him go if I wanted to start moving forward.

It took courage for me to leave an unfulfilling relationship and pursue my goal to teach English for the Peace Corps.

While I lost out on my first love, I gained wisdom from the cultural exchange of ideas and values with the welcoming, humble, and resilient Filipinos who welcomed me into their homes. I also gained a heightened sense of self-awareness by immersing myself in this new culture.

More often than not, we fail to discern why our lives are falling apart in front of our very eyes. Instead of taking a moment to ourselves to listen and maybe even concede to our rational inner voice, we push forward in complacency.

Complacency feels nice, as it’s comfortable. Its soft texture wraps us up in a daily routine of predictability; we feel safe. It’s no surprise that we avoid change, as it brings discomfort and even pain. How could pain possibly bring us happiness?

We tend to silence our rational thoughts in favor of the loud, emotional ones that remind us just how painful pain can be.

Yet, these boisterous emotions admonishing us to continue living in a comfortable rut are actually scared thoughts that bark as they try to mask their fear.

Look beyond that noisy barking, and try to listen to your fearless inner voice. It may be quiet but it’s there, and it is asking you to sit still and listen to it every once in a while.

That night of the accident, as I was sitting on the back of the motorcycle, with my hair flowing to the tune of the wind, I felt so at peace. That quiet ride through the province allowed me to hear my usually inaudible inner voice.

When I heard it, I listened and it shared with me something I had not heard in years. “You are so happy in this moment. Look at the life you are living and enjoy it,” it told me.

As I gave a million thanks to the universe that night, it gave me the gift of a new chapter in my life. My gift was the chance to return home to pursue my career via a different route, only that now I was equipped with more confidence, happiness, and peace with my decisions.

While challenging ourselves in current relationships, friendships, and careers is definitely a scary feat, it is also a rewarding one that pushes us to grow into mentally stronger individuals.

Listen to your inner voice and see just how far you will go when you take a chance on yourself.

Ashley Portillo is a local and global volunteer committed to service and community development. A recent Returned Peace Corps Volunteer, she taught English in the Philippines and is working on creating a non-profit that will be an extension of her work in the province where she was stationed.

3 Negative Inner Voices and How to Challenge Them