When Happiness Hurts: How I Stopped Sabotaging Myself
By Holly Lochinger 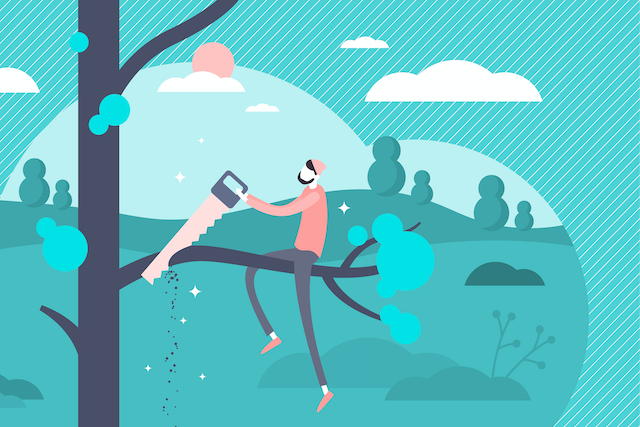 “Disneyland is the star, everything else is the supporting role.” ~Walt Disney

“Just having a quick shower, I’ll text you before I leave x”

I’d received that text only ten minutes ago, so what the hell was wrong with me?

There I was standing in my kitchen like a mad woman, having a panic attack. My mind was in a frenzy with thoughts like “Does he even like me?” and “What if he doesn’t show?”  and I was crying uncontrollably. I hated myself for feeling like this. I’d ruined my makeup and gotten myself into a state over nothing.

Half-hour later he showed up and everything was fine. We had a lovely afternoon and evening together. Everything went well, better actually than I’d expected, and I was really happy.

He was a lovely guy.

But I knew that wasn’t the end of it. Those thoughts and anxiety would come back to get me with a vengeance at some point… probably before seeing him again.

Why did I keep falling victim to these cruel trails of thought that wanted to relentlessly punish me with their horror stories? Because all it was doing was causing me to run away from opportunities of real happiness.

Either that or transform people into monsters through my own negative projections. No matter what, the ending was always the same. Which in turn affirmed my fears and strengthened my sabotaging beliefs about the world and most of all, myself.

It was becoming crystal clear that happiness was too much for me to handle… because I had no idea what to do with it.

You see, I’d developed a fear of happiness at a very young age.

My earliest memory was being at my Nan’s (a place I loved more than anywhere else) and her teaching me how to slide down the stairs on my bum.

I also remember getting really frightened and hiding when my aunt shouted at her and my grandad, sometimes getting physically violent. Then my aunt would not speak to anyone for hours. Heavy tension would descend upon the household, and I would sit on the same stairs crying and apologizing outside my aunt’s bedroom door, not even sure what I’d done wrong.

At home, I remember sitting in my bedroom frequently listening to my parents arguing downstairs. I remember my mum shouting at my dad and then in the years to come, my mum being shouted at by my stepdad. Wherever I went there, there was always some sort of drama.

I got used to it very quickly though. My coping mechanism was to retreat, keep my head down, and pretend it wasn’t happening. I would talk to my cuddly toys, turn the TV up, or bury my nose in a book. Those were my escapisms while unpredictability, insecurity, and apprehension became a way of life.

It also became second nature for me to expect that any kind of comfort or glimpse of happiness could be taken away from me in the blink of an eye.

As I got older I became my own worst enemy, repeating the same story with jobs and relationships, always waiting for the other shoe to drop and ultimately sabotaging them with my fear. I wasn’t even comfortable with physical wellness, so I jeopardized my health with bulimia nervosa, binge drinking, and drug taking.

I became stuck in a push-pull dynamic. I longed for stability, but any prolonged sense of well-being scared me. It went against the grain of everything I’d become accustomed to as a child. So, I would deliberately do something to destroy it and stick to the storyline I knew all too well.

After years of personal development and spiritual growth, though, this on/off, up/down way of living became intolerable. And although it’s easy to blame others, I can see how my parents became stuck in their own negative stories of disappointment and defensiveness. We can’t teach others what we ourselves don’t know.

It’s tempting to regurgitate to people, “Well, I had a hard upbringing, and I’ve been in a series of abusive relationships and so on,” but guess what? That’s not the story I want for myself anymore.

I’m ready for a brand new story and a whole new genre. And it’s called peace and happiness. This is the script I’m now in the process of writing for myself and will pass on to any children I may have.

For those of us who were taught to expect chaos and conflict, it can be difficult to understand the difference between happiness and hardship.

Admittedly, I’ve spent a lot of time going back and forth saying yes to stress (in the form of abusive men and unobtainable goals) while procrastinating over simple actions I knew would make all the difference to my well-being.

I’ve looked for problems where there haven’t been any, and I’ve ignored the ones staring me in the face. I’ve placed myself in stupid situations and then lost my temper with the people around me. I’ve acted out of habit rather than listening to my own intuition telling me to walk away or do something different.

Through re-parenting myself and reflecting on all of these so called “mistakes,” I’ve  grown by leaps and bounds.

I’ve come to understand that I never had any love taken away from me because of something I’d done wrong. I’d just adopted that particular storyline, which in turn made me feel vulnerable and frightened when anything good entered my life.

It’s this awareness that has helped me make peace with my childhood, forgive my parents, and let go of the resentment and blame. Toward them and even more so, toward myself.

Through the natural ebb and flow of daily life I’ve managed to find stability and balance within me. Call it a cliché, but there’s a reason why self-love is emphasized in the world of personal growth.

My relationship with myself has become one based on trust, respect, nurturing, compassion and encouragement. A relationship where I’ll I say to myself, “You’ve worked hard today, have the night off, Holly. It’s okay to relax”

I’m now able to look into my own eyes in the mirror and ask myself, “What do you need right now? What can I do to make you feel better?” and say, “You know what, I’m really proud of you for taking action and making that decision.”

I also allow myself to feel the anxiety and unworthiness when they hit me without getting angry and frustrated. Instead, I hold myself in a space of love and safety, allowing all the scary thoughts and emotions to dissipate of their own accord.

That is true power and strength, and through practice, it gets easier. Trust me, it does.

Because the rewards speak for themselves. In the form of relief, light heartedness, and periods of tranquillity, which in time become longer and longer.

The temptation to rummage around in my cupboards at 11pm for biscuits and crisps or drink an entire bottle of Shiraz and chain smoke until my lungs hurt no longer seems as appealing as it once did.

Instead, a relaxing bubble bath, a yoga nidra practice before bed, or a coastal walk beckons to me— and I go. Things that once upon a time I would have labeled as boring.

What I’m fully embracing now is fun and freedom. Giving myself permission to laugh and be silly, taking the time to be present and not worry about the future. And instead of looking for potential problems, I seek out the buried treasure that lies in wait—in every possible outcome, knowing that no matter what I’m going to be okay.

As easy as this may all sound in theory, the most important thing I want you to take away from my story is this…

There is no final destination or “happy ending.” There is only evolution, expansion, and growth. We can spend our lives chasing happiness and emotional fulfillment, or we can actually allow and experience them, in the here and now.

We can think of happiness as something to struggle for and obtain, and then worry about losing if we feel we’ve gotten close, or we can think of it as a series of choices we make daily—starting with the most important choice:

Do we believe it’s safe to let go and feel happy, or do we keep telling ourselves the same story about potential disappointment?

True happiness and success come from understanding that right now is the only thing that matters—the thoughts you are thinking, the words you are speaking, the actions you are taking.

You are creating your story for yourself right now in this moment. And you can change the script, the storyline, and the genre anytime you like. You can assign yourself the role you aspire to be and actually become it. You don’t have to wait for someone else or some other external condition to make that decision for you.

Riding off into the sunset with your soulmate and a treasure chest may be farfetched, but love, hope, and excitement for life doesn’t have to be. As my Nan used to say to me, “Life’s what you make it.”

Your life can be whatever you want it to be.

So all the tears and heartache, see them as medals and badges you’ve earned. See them as success stories depicting strength of character and faith, because it’s those attributes that have brought you to where you now stand. They are the invaluable assets that you can depend upon to carry you wherever you wish to go next.

You are the writer and the illustrator of your own story, so make it a good one.

Not for others to talk about and applaud you for, but for you to honor and be proud of. One that you can pause and reflect on whenever you struggle, and bask in as brand new exciting chapters unfold.

As Walt Disney said, “Disneyland is the star, everything else is the supporting role.”

You are the star who brings your story to life. So see this moment as a blank page for you to make your mark on in whatever way you choose. Because that is the only power you ever really have.

And in truth, it’s the only one you’ll ever need.

Holly is a free spirit with a wacky sense of humor and childlike addiction to fun and mischief.  You can find her either on a coastal walk in Dorset, doing downward dog in her lounge, or discovering new ways to inspire her female clients.  Take full advantage of her free gift "7  Days To Fun & Freedom" which shows you how to release the stresses of life and make room for true miracles to unfold.