When People Judge: Why It’s Not Really About You
By Martina Weiss 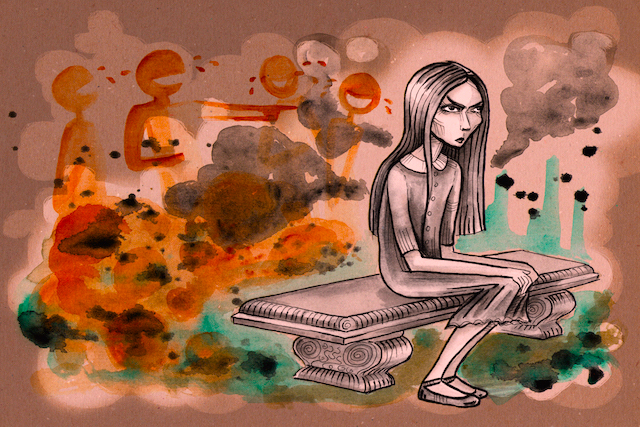 “Doubt yourself and you doubt everything you see. Judge yourself and you see judges everywhere. But if you listen to the sound of your own voice, you can rise above doubt and judgment. And you can see forever.” ~Nancy Lopez

You and I, we judge others. And they judge us. We all do it. Sometimes we judge with positive or non-harming intentions.

Unfortunately, our judgment often comes from a negative place, with darker intent.

Why Do We Judge?

Though we judge for many reasons, we often do it when:

I believe we judge for the first reason because our minds want to simplify the processing of information by putting environmental clues into categories. This just makes things so much easier, doesn’t it?

For me personally, when I judge for the second and third reasons, I have especially negative emotions and thoughts toward others.

I try hard not to judge, and have been doing so less and less, but I still have a ways to go.

How I’ve Judged Others

I used to judge people, especially men, when I learned that they had been unfaithful to their girlfriends.

As soon as I learned about the situation, I would feel resistance and anger building up inside me. I would immediately begin insulting them in my head, and sometimes would actually verbalize it if there was someone to discuss it with.

Today, I rarely react like this. I know not to judge someone based on their actions because everyone makes mistakes, and some people prefer to behave in a way not everyone else can relate to.

I still don’t find it appropriate or fair to cheat on someone, but I stopped letting that define the worth I assign to that person.

I know now where that strong negative response comes from. Someone once cheated on me, and it caused me a lot of pain. As a result, I have developed a pretty rigid mindset around that topic.

In the past, I also judged women when I felt threatened by them, especially those who I perceived to be extremely attractive.

I compared my body to other women’s bodies because I feared I didn’t look as hot as they did, which was clearly a matter of low self-esteem. The conversation in my mind went something like this:

“Oh, look at that girl in that red dress—her tight body and her perfect curves. And look how she moves. I’m sure she must get a lot of attention and admiration from the guys around here. She has to be really arrogant.”

This inner chatter made it pretty apparent what was going on inside me in those moments. First, I began comparing myself to someone who I perceived to be better than me physically, then I decided I couldn’t measure up. This, of course, made me feel threatened.

So I judged her by using a big generalization to put her down so I could feel better about myself.

What Can We Do About It?

I’ve noticed that my increased level of self-love has helped me judge a lot less. (You can find some helpful tips to increase your own self-love here.)

Also, I’m more aware of it now when I judge because I feel threatened, and with awareness, I am able to step back and ask myself whether my initial judgment is true.

I almost always have to own up to the fact that no, just because someone is attractive, that doesn’t have to mean she’s arrogant.

I’m not saying that we all have to learn to stop judging others. Maybe it isn’t even possible to do so because of the way we’re wired as human beings.

But what we can learn is that our judgments mostly have to do with us, not the people we judge, and the same is true when others judge us.

In most cases, we judge others in order to feel better about ourselves, because we are lacking self-acceptance and self-love.

If we could learn to embrace ourselves as we truly are, would we still be so judgmental toward others? Most likely not. We would no longer need a reason to put someone else down just to raise ourselves up.

This is only one of the many reasons why self-love is so important and powerful. If we could all learn to love ourselves, we would make our world a much more compassionate and much less judgmental place.

Martina is a Self-Love Coach for women who want to free themselves from expectations and judgments and start living life on their own terms. She believes that learning self-love and self-acceptance is the only way to become the best versions of ourselves and thus, live a happy, fulfilling, authentic lives. Visit coachingwithmartina.com or connect with her on Facebook or Twitter.