When Your Beliefs Hold You Back: Release Them to Avoid Regret
By Michael Davidson 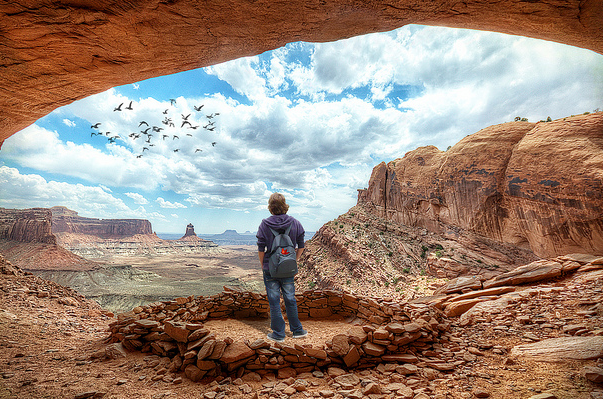 “Waking up to who you are requires letting go of who you imagine yourself to be.” ~lan Watts

Do you hear voices?

Even when you are alone, there is usually someone talking to you. And you hear them loud and clear.

Everyone has an internal dialogue going through their heads for a large part of the day. Just because you hear these “voices” it doesn’t mean you are crazy.

On the other hand, these voices can make you believe some crazy things.

Most of what these voices tell you is negative. And when you hear these negative things often enough, you come to believe them.

The worst part is that these voices speak to you in the first person, making you imagine that it’s actually your words:

Underlying each of these statements are assumptions that restrain your behavior, or limiting beliefs. See if you can spot some.

For a long time, I thought I had to become a professional, like a doctor, lawyer, or accountant.

Since I was good at math, I decided to become an actuary. I was fairly content with this decision for a while.

But despite enjoying my 10-week internship, I felt like I couldn’t handle 40+ straight years of corporate work.

In my mind, however, it would have been a waste of my intelligence to do anything else that I wanted to do, such as writing. Plus, I craved the ego boost that comes from other people seeing me as intelligent.

So I applied for more actuarial jobs. And I got rejected from all of them.

While it certainly did hurt to get rejected, it forced me to choose another path for myself.

I read everything I could get my hands on about blogging, and I learned (and continue to learn) that it is not easy. Intelligence is necessary for blogging just as it is for being an actuary.

As a side benefit, more people probably think I’m intelligent now because they don’t have to compare me with other math nerds!

I know now that just because I am good at math, I am not obligated to use it. I may one day get back on the actuarial path, but I’m free to do whatever I want!

I was very lucky, because circumstances made me get past my limiting belief. Most of the time, this won’t be the case.

A limiting belief can implant itself in your subconscious and stay there for your entire life if you don’t do anything about it.

Had I not challenged my belief, I certainly would not be traveling, writing, and teaching right now.

Instead, I would probably be wallowing in my own unemployed self-pity. If I got an offer next year, then I would be on that boring 40-year career path that I know I can’t handle.

If you look at your own life, you should have no problem finding at least a few limiting beliefs.

You are probably acutely aware of several of them right now.

But despite this awareness, you don’t challenge them. It’s more comfortable to just accept what you have believed for so long. Perhaps the belief will just melt away at some point, so why bother putting in the hard work that challenging it may entail?

So often, we choose to just accept our limiting beliefs, not because we truly think they are correct, but because it’s easier to do so.

Well let me tell you something. While it may be easier in the short term, challenging my limiting beliefs opened up a world of possibilities for me.

Like I said before, I got lucky. I hadn’t even considered all the ways my life would have been worse if I had continued believing what I had for 10, 20, or 40 years longer than I had.

But that’s exactly what you have to do in order to create leverage against your limiting beliefs, giving you true motivation to change them.

So, ladies and gentlemen, sit back, relax, set aside 10 to 15 minutes, and get ready.

The following exercise is not meant to make you feel good—quite the opposite in fact.

If you don’t feel absolutely horrendous by the time you are finished, you probably didn’t do it right. I was crying by the time I finished this exercise my first time.

Well, if that doesn’t make you excited to get started, I don’t know what will!

Pick one of your limiting beliefs that you find particularly troubling. One that you know you must get rid of, but just can’t bring yourself to fight it.

Keep that belief front and center in your mind. Notice the ways it has affected your life thus far. Notice the opportunities you’ve missed. How does this make you feel? Good? Bad? Do you feel stuck?

It’s amazing what this exercise can do.

Rarely do we consider the impact that our limiting beliefs have on us. All we think about is how our beliefs let us take the easy way out.

After all, it’s easier to not exercise than it is to exercise. And if you really can’t lose weight, then it’s convenient that you can save time and energy by not exercising, isn’t it?

But your belief is not a fact.

You probably are able to lose weight; you just aren’t doing what it takes because it’s difficult.

But once you project what this belief is doing to you far into the future, you see how destructive it really is.

If you don’t change, you could live a live full of regret. You don’t have to let that happen.

What limiting belief has been holding you back?