Where True Happiness Comes From: How We Gain by Having Less
By Katy Cowan 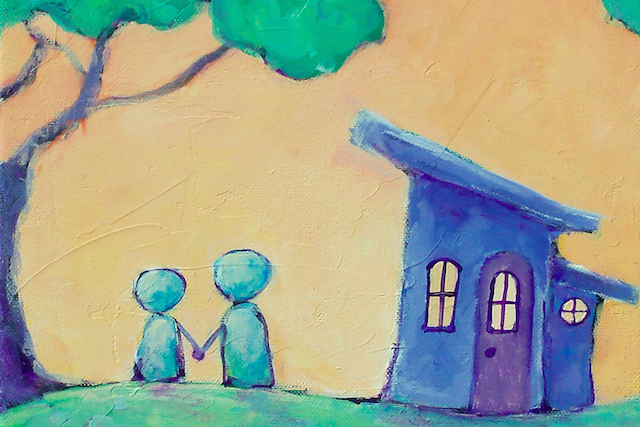 “The things you own end up owning you. It’s only after you lose everything that you’re free to do anything.” ~Chuck Palahniuk

Small is the new big. That is to say, minimalism and living with less is becoming a growing movement in America and it’s starting to catch on over here in the UK too.

With the global economic crisis and changes in social attitudes, people are starting to realize that the more stuff we have, the more miserable and trapped we become. After all, stuff leads to debt, stress, and even increases our carbon footprint.

Plus, living in larger homes with space we don’t really need only equals more stuff, more spending, and more worry. Then, when we run out of space, we move to a bigger property—or even rent storage space.

Stuff doesn’t make us happy. We might get that initial glow of excitement when we purchase new things, but it doesn’t last.

True meaning and happiness come from experiences. From family and friends. From hobbies. It comes from the things that we do, rather than the things we own.

Like most people, I followed the American Dream. I wanted the big house and garden. The nice car. The expensive clothes. I also wanted to portray an air of success to “get ahead” in the business world.

As someone who runs their own business, there’s a perception that if you’re not moving along a certain path, you’re not considered to be successful. That if you don’t turn up to a meeting in a decent car or wearing expensive clothes, you won’t be taken seriously. That you’re not worth the money you’re charging.

I guess this perception of wealth extends to our self-worth and confidence. We feel more empowered if we’re attending a meeting wearing the right clothes and carrying the right handbag, for instance.

But then this false sentiment extends to our private lives, as well. We want our peers to think we’re successful. We’re embarrassed, for example, if we’re driving an old car or wearing last season’s fashions. We feel like we’re going backward rather than forward if we’re not “keeping up.”

Of course, it’s easy to fall into this trap—assuming that we really must drive expensive cars, wear designer clothes, and buy things we don’t really need.

It’s the way brands and big companies want us to feel. They want us to spend money, constantly consume, and place all our self-worth, confidence, and happiness on “stuff.”

They want us to be on an endless mission to be happy through consumption and spending. I’m just relieved I’ve worked this out now and discovered the truth.

Through my own endless pursuit to be happy and seemingly successful, I was miserable and constantly running on a treadmill to keep up with my excessive lifestyle. When I say excessive, it probably wouldn’t seem that way to others. Most people would see this typical way of life as pretty normal.

At some point though, it stopped being normal to us and we had a “Eureka!” moment. We realized that we didn’t need all that space, let alone all that stuff. So, we sold our big house, got rid of our expensive car, and started to think about minimal living.

What could we get by without? What did we really need anyway?

Well, we’ve just bought a 600 square foot apartment in the city. It’s got one bedroom, one bathroom, an open-plan living space, and a little balcony.

We’ve downsized our stuff and now only have what we need. Sure, there are a few luxuries but for the most part we’re a lot lighter than we used to be.

How do we feel? We have no debt, we have less stress, and we don’t have to work as hard to maintain our lifestyle. Because we live in such a small space, housework takes no time at all. And with no garden, we don’t spend hours maintaining a lawn or borders.

This means we have more time. And that time is dedicated to ourselves. To hobbies, experiences, and family and friends. We also have more money to spend on doing things like travel, concerts, or even French lessons.

Because of our new lifestyle, we’ve never been happier or more comfortable. Our lives are rich with meaningful experiences and relationships. And many others who are following this minimalist lifestyle are enjoying the same benefits.

I personally think the age of consuming could be coming to an end. It’s certainly starting to lose momentum. People are realizing there’s a big difference between “want” and “need.”

And with an increasing population and higher land prices, the future could be quite small compared to the way we live now. It might be that minimalism becomes a necessity rather than a lifestyle choice.

Do you feel like you’re weighed down by your things? Do you find yourself constantly working to pay for the expensive things you own? Are you lying awake at night stressed and worried about debt?

Why not try a little minimalism? You don’t have to go to the extremes I’ve gone to. You could just downsize a few bits and bobs. Buy less stuff. Or even swap your car for a cheaper mode of transport?

And instead of spending money on things, why not invest in experiences? In relationships? In the times that set your soul on fire and make you jump for joy? Why not create those precious memories that have you grinning from ear to ear every time you recall them?

Because you know what they say: You can’t take it with you. But you can certainly be satisfied that you lived a wonderful life.

Katy Cowan is an author, journalist, and marketing professional based in the UK. She runs her own digital agency in Manchester and during her spare time she loves to help other creatives via her creative industries magazine Creative Boom.