Why Judging People Makes Us Unhappy
By Toni Bernhard 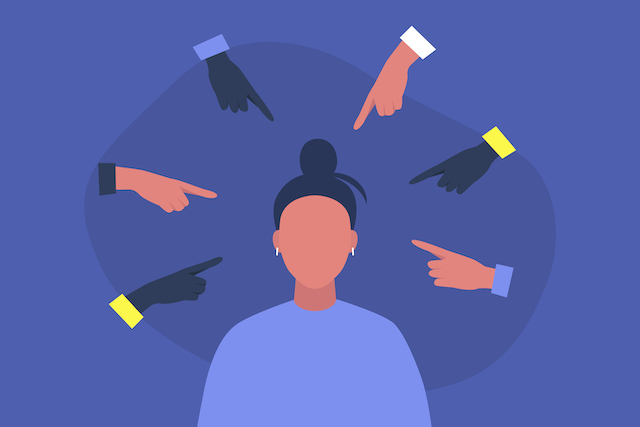 “It’s not what you look at that matters, it’s what you see.” ~Henry David Thoreau

A friend of mine likes to joke that dying will be a relief because it will put an end to the “heavy burden of judging,” as she calls it. She envisions herself lying in a hospital bed and, moments before death, noticing the ceiling and thinking, “What a hideous green.”

I call it a modest proposal because I’m not even addressing the issue of self-judgment, let alone BP or Gaddafi. No. I’m just asking you not to judge friends or strangers.

It’s entirely possible you won’t make it past a few minutes without judging someone!

So, why not just judge away?

To answer that, let me start by drawing a distinction between judgment and discernment.

Judgment is what we add to discernment when we make a comparison (implicit or explicit) between how things or people are and how we think they ought to be. So, in judgment, there’s an element of dissatisfaction with the way things are and a desire to have things be the way we want them to be.

Take that talkative friend. To think or speak in a neutral, purely descriptive tone, “She can talk non-stop for fifteen minutes,” is an example of discernment—assuming the assessment is accurate, we’re just describing the way things are.

On the other hand, to think or speak in a negative tone, “She can talk non-stop for fifteen minutes,” is an example of judgment because that negative tone reveals our dissatisfaction with how she is and our desire for her to be different.

The same analysis applies to the complaining friend. If we say, “He complained about this life the entire evening,” depending on our tone, it could be a neutral observation (discernment) or it could reflect our dissatisfaction with him and our desire for him to be different (a judgment).

Now think about strangers. If you’re like me, there’s almost always a subtle judgment waiting in the wings. “She could stand to lose some weight.” “Doesn’t he know how to pick a tie that goes with a shirt?”

So, again, why not just judge away? Recall that in judgment, there’s an element of dissatisfaction with the way things are and a desire to have things (in my examples: people) be the way we want them to be.

So, judgment is just a recipe for suffering: Start with our dissatisfaction over how a person happens to be and mix in our desire for them to be otherwise. To make that suffering nice and rich, be sure the desire clings tightly to the dissatisfaction!

It doesn’t mean we have to hang out with someone who talks more than we’d like or who does nothing but complains about his life. But we can make the choice about whether to be with them without judging them. When we do, it feels good; it has that peaceful quality of letting go of clinging to the way we want people to be.

As for those strangers, maybe the woman I saw has a medical condition that results in weight gain, or maybe she eats to deal with uncomfortable feelings. Perhaps the man was wearing the only tie he owns. Judging them did nothing to ease their suffering, and it certainly didn’t ease mine.

Now try this experiment. Think about a couple of friends who annoy you in some way. Can you let them be the way they are without desiring them to be otherwise? Sticking with my two examples, can you open your heart to her talkativeness or to his constant complaining?

Walt Whitman said, “I contain multitudes.” I like to think of the world as containing multitudes. I do this by consciously thinking, “This world is big enough for both the talkative and the untalkative; for both the complainers and the non-complainers.”

Judging is such a well-ingrained response that I hardly notice when I’m doing it, so I know I have a lifetime of conditioning to overcome. But it’s worth it because when I don’t judge, I feel the benefits in both my mind and my body: I feel as light as a feather.

I truly hope I can shed that heavy burden of judging before that moment in the hospital bed when I’m staring at the green ceiling!

Toni is the author of the Nautilus Gold Medal winning How to Be Sick: A Buddhist-Inspired Guide for the Chronically Ill and their Caregivers. She can be found online at www.howtobesick.com

Create a Kinder World: What to Do Instead of Judging

3 Causes for Judging People (And How to Accept Yourself)