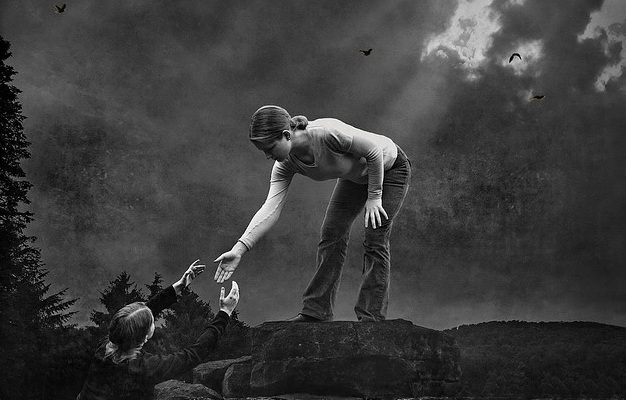 We talk about boys these days at our dinner table.

Boys are sneaking into our home now—or at least the idea of boys. Although I love watching my daughters grow up—it’s much more fun (and much more challenging) than I ever could have imagined—I sometimes feel a certain sadness as their days of early childhood innocence slip behind us.

Their battalion of stuffed animals, for example, who were accustomed to a life of travel and adventure—and a well-dressed one at that—often live in boredom now, with only an occasional new scarf or hairdo. But I know this is the natural turn of events. I’ll get over it.

In fact, there is a juicy energy that our daughters bring back with them from their encounters with life these days.  As their view of life becomes more complex and inclusive, their struggles become richer, and I am honored to both witness and participate in this process of growing up with them. And that is what it often feels like to me—growing up with them.

I know I am “the grown up” but, to be honest, I’m not always up to that title.

I often struggle with the same kind of things that they do, though my struggles may be less visible and my excuses more sophisticated. Here’s an example of what I mean.

One Saturday morning we all identified some family contributions that we were going to make. (Thanks to Parenting on Track, we now “make contributions” rather than “do chores”). One of my daughter’s contributions was to bring five pieces of wood in from the mud room for the woodstove.

We each went about our work independently, with a plan to go sledding once everyone was finished with their list.  Later on, both girls let us know that they were all finished and ready to sled, so that’s what we did.

But when Gregg was beginning to make a fire that evening, he realized that all the wood at the stove were the logs that he had brought in earlier.

I heard him ask the question, “You brought in five pieces of wood?” And again, she confirmed she had. “Can you point to the ones you brought in?” he asked her. She was quiet for a moment and then said, “Oh, well…maybe I forgot to bring them in.” And when asked further, she admitted that she had lied.

I felt disappointed. While this lie was in the minor league of lies, it still was a deliberate attempt to mislead us and avoid responsibility. How long would it have taken to bring in the wood? How should I respond to this lie? When was the last time that I lied?

When was the last time that I lied—where did that question come from?!  Though uninvited, this question quickly redirected my internal dialogue while taking all of the vitality out of my pointing finger.

So I began to think a bit about the issue of honesty in my own life. Oh, dear. What a distraction from my parental role—or maybe not.

Maybe this question points me in exactly the right direction.

Maybe it gives me half a chance to parent with love and compassion and to understand my children, rather than simply judge them from a lofty parental pedestal.

That’s not to say that I ignore my daughter’s dishonesty—that would not be in her best interest.

I can still set firm boundaries but I am more likely to deliver them with kindness when I am in touch with my own challenges and failings. “I know what she’s up against,” as Pema Chodron likes to say.

I have done enough self- reflection to know, intellectually, that I am not a stranger to lying. But without the immediacy of real-life details, this awareness carries little weight.

It’s not that I have been “dishonest,” it’s that I once told my Aunt Millie that I accidentally spilled nail polish remover on the top of her bureau, when in fact I deliberately started applying it to the finish to see what would happen. (It wasn’t good).

I told my father that I gave Tony’s tie clip back to him, when I really wore it proudly every day at school on my collar (I know this dates me) and then tucked it safely into my schoolbag each day before I came home. I understand lying because I have lied. If only my memories of lying stopped in my childhood.

But no, on they go, weaving in and out of my relationships for decades to come. A few weeks ago I impulsively closed down an email that I was writing to a friend, who needed some important information from me during business hours, when Gregg walked into the office. Why?

It’s curious. My instinct was to do something sneaky in order to appear innocent. It reminds me of a comic—a fellow in his nightgown who, kneeling at his bedside with eyes closed and palms together, sends up his prayer to the heavens.  He pleaded, “Please protect me from the appearance of wrongdoing.”

These things often happen so fast. “Did you bring in the wood?” She who hesitates looks guilty. “Yes, I did.”

From where we stand at such pivotal moments, the appeal to mislead may feel almost irresistible, particularly when we don’t have time to think it through clearly, especially when we believe that no one would be the wiser.

How do we come to value honesty so much that we turn toward it, even when we anticipate loss of trust, esteem, or privilege? Life isn’t always as neat as we’d like it to be—that much I know.

Most of us have a fairly rich personal history with not only gossip and lying, but with all kinds of undesirable tendencies, such as impatience, greed, pride, and laziness. Most of us, if we’re honest with ourselves, will find remnants, if not reams, of the common human shortcomings in ourselves that we so dislike in others.

How, then, do we remain so judgmental and critical toward others, nailing them for failings that we dismiss or overlook in ourselves?

We don’t notice. We don’t hear the sound of our own impatient or harsh voice, as others hear it. We’re too busy, too focused on the provocation itself, too accustomed to being who we are and how we are. Our attention gets so riveted upon the dazzling transgressions of others that we lose sight of our own.

We don’t remember. We all want to feel good about ourselves, to live with a comforting self-image of which we are proud. Those memories that are in conflict with such an image can easily fade away, leaving us with a distorted perception of life.

We have a double standard. We tend to view the mistakes of others head on, under harsh spotlights, so to speak. When viewing our own situation, however, we may use a softer, more forgiving light.

So I have a new mantra to help me address this poor-memory syndrome: “Have I ever done something like that?”

Fortunately or unfortunately, depending on your perspective, the answer is almost always yes. It’s like a reverse catch-22.

In those moments when I’m living well, with integrity and responsibility, I’m benefiting, and others are, too.  And when I am not living so well, we can all still benefit—as long as I remember to notice, take a breath, and transform my judgments into love.

Linda Anderson Krech, MSW, is Program Director of the ToDo Institute. She has been practicing and teaching Japanese psychology since 1988, and now develops applications for children and families. She is the author of Little Dreams Come True: A Practical Guide to Spiritual Parenting.

What My Self-Judgment Was Trying to Tell Me

What Are You Practicing—Self-Judgment or Self-Compassion?