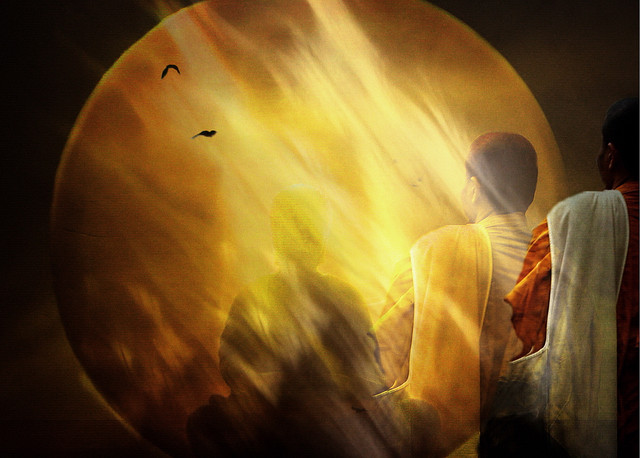 When I started graduate school, it was safe to say that I was running away from things. I’d recently ended a nine-year relationship and I wasn’t planning on dealing with it.

Upon the birth of my nephew, my father, a long-term addict, had begun rekindling his relationships with his three daughters. I didn’t recognize, though I should have, that this needed dealing with too.

I began school so that I’d have something to pour my energy and feelings into wholeheartedly. And I did. It worked, at least for a while. I soon began to notice that I was increasingly unhappy in my new student position.

While I had things I looked forward to, like teaching and program events, I spent my time alone watching television in bed and wishing I could be anywhere else, though I didn’t know where that might be.

It was the closest I could ever remember feeling to depressed, a word that had long been whispered, though never addressed, in my family.

There are few perks to being a graduate student, at least on paper, but one of them, for me, was school-funded student health insurance that included mental health care.

I should mention that, although my family history certainly warrants mental health care, no one had ever sought it. If ongoing drug and alcohol addictions, divorce, and teenage pregnancy apparently didn’t warrant it, perhaps nothing would. But I was feeling pretty bad, and it was free.

On the day I walked into the counselor’s office, I found two people from my very small program sitting in there.

It was at first awkward and then comforting—each of us had found ourselves in a similar situation, and something about that Tuesday had summoned us to the office.

Inside, I met with Krishna, a soft-spoken therapist who identified my family immediately as co-dependent and prone to addiction.

I felt better already. She recommended that I be around animals and begin practicing yoga. I committed to both and began seeing Krishna every other week.

Since I was a busy student and unable to commit to a pet, I decided to volunteer at a local animal shelter. Every Friday, I woke up at 6am to walk dogs for an hour before I went to teach. It was inspiring for a few reasons—one, it reminded me that things could be worse, and two, puppies.

The animal capacity for cuteness and kindness is extraordinary, and I certainly felt better for having been around them.

It is often said that volunteer work is a selfish task, designed to make the volunteer feel better for having done it. I don’t object to this, nor do I see anything wrong with it. Those dogs got me through graduate school.

Next, I set out to learn to practice yoga. This was a scary goal because it seemed to showcase many of my fears and insecurities.

I was self-conscious about my body and asked to put on body hugging clothes. I was uncomfortable being watched, and the eyes of the class would often be on me. Also, I’d never done yoga before and the thought of all of those skinny, stretchy people terrified me.

With one of the girls I’d run into at the counselor’s office, I searched for a nonthreatening yoga class that I thought would meet my needs.

Upon the recommendation of a friend, I joined a group with a focus on restorative yoga, mostly stretching, snacks at the end.

I found a community of like-minded men and women interested in finding a mind/body/spirit balance to treat the various issues we were all dealing with. Is there anything that hurts today, our teacher would ask, mind or body?

Because I come from a family of somewhat functional alcoholics going back as far as I can remember, I know that these parts of me may just be hidden, dormant for now.

Yoga has allowed me to channel these possible proclivities into an activity that promotes physical and mental health, an activity that is no longer scary. It’s also my way of acknowledging that there is something outside of me, something larger than me, at work in the universe.

Yoga is, for me, the acknowledgment of spirit.

Recovery (from anything, addiction, depression, physical illness) requires the addressing of a triangle in its entirety—mind, body, and spirit. While counseling began to address the mind, yoga and puppies addressed both body and spirit. Learning this felt like my whole body sighing.

While I’m not an addict, I can see how yoga would be useful there, too. A positive community, a refocus on the body, an attention to self-restraint and awareness that is hard to replicate.

For me, breaking down the barriers and walls my family had tried so long create was no small feat. In acknowledging my own capacity for mental illness, I was able to begin a road to recovery that improved my health in many ways. That recognition and verbalization of ill feelings was, for me, essential to the healing process.

In my professional life, I deal with this all the time—men and women struggling with mental disease, often accompanied by addiction, that lack the approval of families to move forward with treatment.

For me, it was easier to say then to do. Eventually, though, it became a part of myself (this history of mental illness) that I was happy to disclose because it meant that I had begun recovery.

Then, I suspected that I was alone. Now, I realize that it’s common to fear that acknowledging there’s a problem is failure.

Be vocal, be active, be spiritual in any way that you find productive. Be alive.

I have a triangle tattooed on my left foot to remind me that everything that goes to pieces also happens in pieces, even recovery. One, two, three: mind, body, spirit.

Emma Haylett grew up in a rural town she couldn't wait to get out of. She now helps coordinate non 12 step recovery programs for addicts and families of addicts.