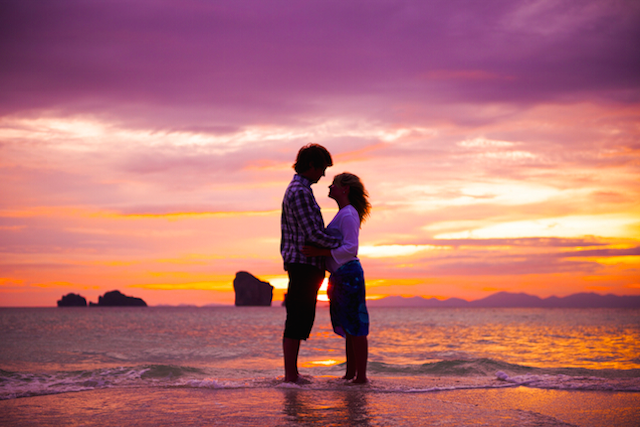 “Love isn’t always perfect. It isn’t a fairytale or a storybook. And it doesn’t always come easy. Love is overcoming obstacles, facing challenges, fighting to be together, holding on and never letting go.” ~Unknown

When I started dating, I idealized love. I had many false notions about relationships, which I formed from my friends, watching movies, and reading romance novels. Many of the beliefs I had about how relationships should work caused me pain and disappointment because reality turned out to be different from what I expected.

Dating became a journey of resetting my expectations and letting go of false beliefs. In order for me to find love, I had to let go of the myths I had around relationships.

I found myself drawn to men who were very different from me during my early stages of dating. They were the stereotypical bad boys who rebelled against authority, the ones with a wild independent streak who were emotionally unstable.

These were the type of men I was attracted to. They made my life exciting and helped me expand my boundaries. I thought opposites would create a balanced relationship, making for an ideal union.

Luckily for me, none of them worked out. Looking back, it would have made for a bumpy, unstable relationship.

While it’s true that we can complement each other with some differences—if, for example, one person is more laid back and the other is more Type A—couples who are more similar have longer lasting relationships than those who are complete opposites.

Dating someone similar means we get the support and validation for our core life values. There will be fewer disagreements on the most important issues and opinions that shape our lives.

Core life values may be spiritual, religious, social, family, and health-related. Taking a closer look at what you prioritize in your life and where you invest your time will tell you your values.

This also means that having similarities lead to more positive feelings because of the reciprocity rule in relationships: we like others who are like us.

It’s exciting to date someone who is the opposite of you at the beginning. But as the relationship progresses two people with different life values will start to separate and head down different paths.

Opposites attract like strong magnets for the short term, but if you’re looking for the long term, it’s similar core life values that will keep you together.

Myth #2: You should be honest about your deal breakers upfront to save time.

The other day I went to lunch with one of my friends, who is a serial dater with profiles on three different dating sites. He dates several women at a time and sometimes goes on three dates a day.

When he tells me how the first dates went, it usually starts with the women initiating several rounds of questions, which then turns the date into a mate interview.

Are you close to your family?

Have you been married before?

How many kids do you want?

I know I have done the mate interview on a first date before, so I understand why these women were questioning him early on.

When I was tired of just dating, and looking to get married, a friend told me to be open and upfront about it, because “you don’t want to waste your time with him, so you want to make sure you are on the same page. And if your honesty scares him then he is not the right person for you.”

This piece of advice could not have been more wrong.

Yes, it’s important to be honest and be on the same page for a sustainable long-term relationship, but letting them know all of your standards and requirements on the first couple of dates is just too much information.

No one wants to waste time in relationships, but interviewing someone shows that you’re more interested in getting what you want from them than getting to know them.

When I was trying to figure out if they would make a good parent or partner, I was screening them and testing them. I went from having fun and being lighthearted on the date to turning into an interrogator. I was limiting myself to a small pool of candidates who were ready to answer these kinds of questions, thereby limiting my chances at finding love.

By being upfront about your deal breakers, you may not even find yourself in a relationship in the first place, because you quickly screened out perfectly good people who had the capacity to be a devoted partner but didn’t show it on the first date.

Myth #3: Having conflict in a relationship means you’re headed for a breakup.

I am terrified of conflicts or any type of disagreements, which is probably why one of my strengths is the ability to always find agreement in groups, no matter how much they differ in opinions.

I formerly believed that fighting meant you’re not compatible with each other and it won’t work out. This was why I thought that love meant never having to fight and I was terrified of conflicts.

In my earlier relationships I dealt with fights by ignoring them, pretending they didn’t happen, and stonewalling, where I just didn’t communicate or just walked away. I thought the problem would just disappear and we could return to a normal state of things, as if it never happened.

I remember when I suppressed my feelings, I experienced random outbursts of crying because I was so frustrated with pent up emotions inside that I would eventually crumble at the slightest stress.

After reading a lot of self-help books and talking to my friends, I figured out that avoidance was not healthy for me, nor the relationship. It dawned on me that because everyone is unique, our differences will lead to disagreements and conflicts.

When you are choosing to be with someone in a relationship you are choosing a unique set of problems that cannot be solved. It’s important to learn how to deal with it, because conflicts can bring you both closer afterward.

So I learned that having conflict is actually healthy for a relationship. It shows that you are being honest about issues that are important to you rather than headed for a breakup.

Changing my view on these three beliefs altered my success in dating. It helped me to grow to have more realistic views of love and be more aware of how much my mindset impacts how I define what love is. I hope shattering these relationship myths helps you as well.

Candace is giving away some free gifts to help you find a happy, fulfilling relationship. As a dating coach for single, professional women, she helps women find the right man. If you’re ready for commitment, learn how to identify men who are ready too with her free online e-guide at www.createahappylovelife.com.

A 7-Step Plan for Finding Love After a Devastating Breakup