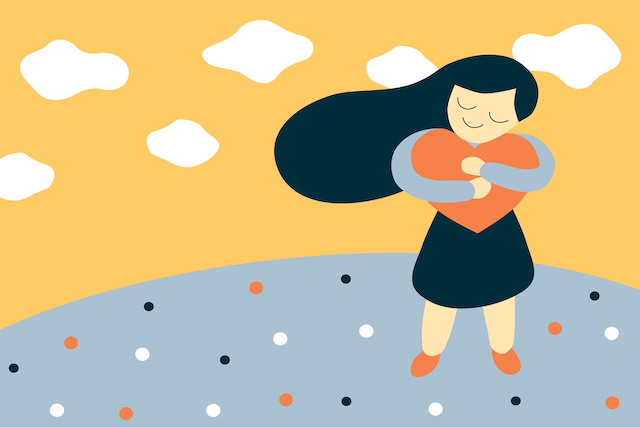 “To be beautiful means to be yourself. You don’t need to be accepted by others. You need to accept yourself.” ~Thich Nhat Hanh

When it comes to self-esteem, I’ve had a bumpy ride. Throughout my school life I was severely bullied and, consequently, I grew up intensely insecure and self-critical.

I constantly measured my self-worth against the opinions of others, and when opinions weren’t forthcoming, I simply filled in the blanks by imagining the worst.

By my twenties I measured my self-worth in terms of my popularity, how successful I was compared to my friends, my appearance, and my love life.

If I had a bad hair day it was catastrophic—I instantly felt ugly, unlovable, and alone. Everything hinged upon my desire to measure up, and if I felt I wasn’t (which I usually did) I would berate and bully myself.

It was as if there was this volcano inside of me simmering away with self-loathing that could burst into outright hatred at any time. Because I didn’t like myself, I was constantly searching for outside validation, someone else that could make me happy and whole again.

Looking back, I think that’s why I found it so hard to be single. I hadn’t learned to like myself, so it made perfect sense that to be left in my own company would cause me unease.

In 2009 it all came to a head when I had what can only be described as a catastrophic breakdown, or as I like to put it, breakthrough.

I finally sought treatment for my trauma, which helped build my self-esteem. I was extremely privileged to have had access to world-class care; however, the steps I took to overcome my low self-esteem—the very same I share with you today—can be achieved by anyone with the aid of a notepad and pen.

The biggest step I took toward learning to love myself was to remind myself of the kind of person I could be.

Shockingly simple, I know, but nevertheless challenging when you don’t like yourself very much. I remember struggling to think of positive qualities that I could honestly claim as my own and trying to silence my inner critic as it discounted each one I thought of.

The more I persisted, the easier I recalled them, one by one. If you find it difficult at first, keep at it—trust me, it will pay off.

Essentially, you are training your brain to look for evidence that supports a higher level of self-esteem, and this exercise is extremely effective. Aim to write down just fifteen positive qualities that relate to your character.

As I re-read my list, I remembered I had qualities I liked and was proud of. The process of writing them down had reassured me that I had worth after all. I then went through the list and wrote down examples of when I had displayed those qualities.

You don’t have to do this for all of your fifteen qualities. Simply pick your five favorite qualities from your list and note down the times when you have shown those traits to others.

When I did this for my own positive qualities record, I really had to search for examples, but the sense of validation I felt was well worth it. I now had concrete evidence that I possessed the qualities I had attributed to myself—a powerful silencing tool for my inner critic!

Step 2: Create an activity diary for achievements, fun, and relaxation.

This step had the biggest impact upon my self-esteem by far. I was given instructions to list daily entries with an A (for Achievement), an F (for Fun), or an R (for Relaxation) besides each task or activity. I was also told to list small things for A’s to build up my confidence before listing bigger tasks.

These simple instructions transformed how I saw my time and, most importantly, how I viewed self-care. No longer did I think of fun and relaxation as frivolous or insignificant. I now saw them as equally valid to tasks and an important use of my time.

Day by day I ticked off the A’s, F’s, and R’s in my diary and almost immediately my confidence and self-esteem grew. I had a sense of achievement and inner pride from knowing I was practicing self-care and being productive. Moreover, my confidence in my capabilities grew tenfold.

I started to have guilt-free fun and rediscovered the joy it brought. I learned what I found relaxing and I became calmer as a result.

The truth is, these same benefits are available to you right now. All you need is a diary and a pen—nothing fancy—just something to write down two tasks each day. List one Achievement and either one Relaxation or one Fun activity. Then take pleasure in seeing your self-esteem rise.

The problem with core beliefs is that we believe them at our very, well, core. Unsurprisingly, one of my negative core beliefs was that I was unlovable. The first thing I did was to write it down and then challenge it to discover a more realistic, balanced core belief.

It was hard at first, but after some time I came up with “I may not be perfect, but there are many people that love me and find me lovable.” This was definitely a more accurate and balanced core belief, and one I would do well to adopt.

I then listed all the evidence for my new core belief to date.

I listed all of the people who I knew loved me. I listed my positive qualities as lovable traits and examples when others had been loving toward me. In the second column I listed: noticing when people pay me compliments, paying attention to loving gestures, and making note of when people tell me “I love you.”

The more I reflected on the evidence, the less I believed that I was unlovable and the more weight my new realistic and balanced core belief held. I suddenly felt lighter, relieved even, as if I had just woken up from a nightmare that now had no place in reality.

By their very nature core beliefs are deeply rooted, but if you regularly look over the evidence you’ve written for your new balanced core belief, you too can overcome its grasp!

I’m happy to say that the insecure and self-critical years I spent in my twenties seem like a distant memory now. I’m kinder to myself. I’m more forgiving of my flaws and don’t equate them to my self-worth.

Sometimes, when I’m feeling particularly confident, I even go out without make-up on—just to prove to myself I can and that I am more than the summation of my looks.

What others think of me no longer bothers me in the way that it once did because I know that I am a loving, kind, generous person with a lot to offer people.

As I write that, it sounds arrogant on the page, but that’s what I believe and that’s what my internal dialogue has become.

Don’t get me wrong, my inner critic sometimes pops his ugly head up every now and again, but I now have a vast array of ammunition to throw at him.

By following these steps you will accrue your own arsenal to throw at your inner critics so they too can be silenced and, as Thich Nhat Hanh would say, so that you can accept yourself—both wholeheartedly and completely, for the beautiful person you were born to be.

After weathering many storms Jenny Leigh began creating the life she longed for. Since redesigning her life she became passionate about helping others do the same and so created her personal development and psychology blog, accessiblepsychology.com. Through her blog, Jenny embarks with you on a journey of personal transformation—covering everything from stress management to achieving lasting change.