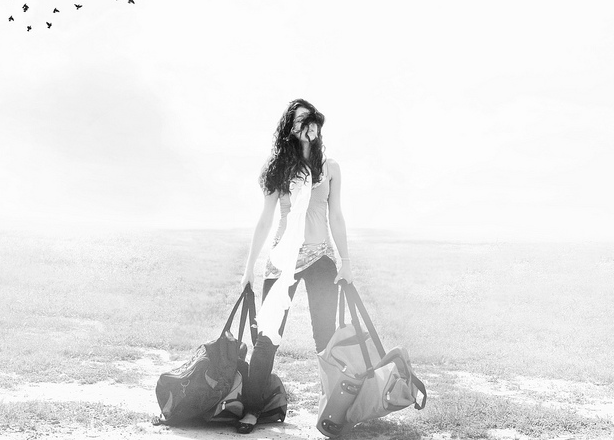 “Life’s blows cannot break a person whose spirit is warmed by the fire of enthusiasm.” ~Norman Vincent Peale

“Something just doesn’t feel right,” I thought to myself as I walked into my house after a long commute from work, being greeted by my exhausted spouse, who was trying to manage the kids after putting in a long day at her own job.

Work hard, save money, buy a house, and live happily ever after. The formula I grew up with didn’t seem all that great anymore. Was it broken? I mean, I worked at a good job but felt as though I was meant to do more.

My stress and anxiety were heightened by the increasing uncertainty in my career, the unpredictability of events, and the complicated, fast nature of life, especially over the last few years.

I became stuck, frozen, and paralyzed by the chaos of life and work I felt all around me.

With no reasonable approach apparent I stood still. Examining my life, overthinking all the various life paths in front of me, presented a scary picture. Each path looked worse than the other, inhibiting any possible action I might take.

As I was spinning down this spiral of anxiety, my life stagnated and I just felt hopeless.

Then one day, I took an unexpected trip that changed my life and led me down an unpredictable path, where I learned, adapted, and grew to understand myself better. It also led me toward a life purpose that was neither grand nor perfect, but it seemed to fit. It just made sense, and I discovered it by chance.

Or was it by chance?

Breathing fresh air into a stagnant soul, I felt alive again, traveling on a road despite the uncertainty existing around me.

Over the last few years, through my journey of trying to figure out which path to follow, I learned a lot about those factors that led me to ultimately discover what I think I’m meant to do.

As a result, I am currently in the middle of a major life change, going from a twenty-year corporate career to being an author, speaker, and career counselor. While I am not sure how the next few years will go, I am at last open to new possibilities.

Here are four lessons I learned on how to find the right direction in life:

So much of our stress and anxiety about the future stems from all the analysis and thinking we do as adults. We ask ourselves all sorts of questions. I recall countless nights lying awake, entertaining ideas, and wrestling with my soul. I tried so hard to figure out where I would end up that I often felt defeated before I even began.

But all the overanalysis got me nowhere; it just burned more time.

The reality is that no matter how smart we may be, we cannot predict the future. Things are moving so fast and we’re so interconnected that it is impossible to predict where you’ll end up five years from now.

You just don’t know. And that’s not necessarily a bad thing, because you will not be basing your choice of direction on a forecast that’s likely to be wrong.

You’ll be making your choice on what’s really important to you, right here and right now, not tomorrow.

By recognizing and ultimately accepting the unpredictable nature of life, we can stop overthinking and overanalyzing, and start living more in the present moment. This helps to open the mind up to the possibilities of today.

2. Try anything. Do something.

When you take action and start doing things, you begin to feel better almost immediately. Instead of thinking about some far-off place in your head, full of uncertainty, you will be working on something that is really certain: your actions.

So many times, I got caught up in the chaos of life and was consumed by it, until I realized that, while I cannot control what will happen tomorrow, I can control the actions I take every single day.

That’s the real beauty of life—knowing that you have absolute control over each of your thoughts, words, and actions.

And by trying, moving, asking, engaging, experimenting, and walking forward, you are one step further than where you were yesterday. And you just never know where that one step will lead you.

I used to feel that if only I knew more, I would be able to make a better decision about the direction I wanted to take in life. But as I dug deeper trying to get more information, the hole got so deep that I found myself buried.

Confused and overwhelmed by so much information, some of it conflicting, I just didn’t know what or whom to believe.

Then, I just let go. I let go of all evidence and started following my gut.

I took chances; I took small steps walking forward in the dark. I stumbled, fell, but got back up and went in a different direction. Then again, and again, and again. As they say, the first step was the hardest, but I eventually found my way, not because some data point on a career chart showed me which way to go, but because I started to trust my inner voice.

Sure, it was often wrong, but it got better eventually because I was out there doing and learning—not sitting and waiting.

When I first started exploring new opportunities to find the right direction in my life, I found myself overwhelmed by the competition. There were so many others just like me trying to do what I was doing.

Turning to my friends didn’t offer any respite, because, instead of encouraging me to try new avenues, some of them brought me back to where I began. “Why don’t you be more pragmatic?”

With such seeds of self-doubt sown within me, it took me some time to recover my momentum. It was in the positive voices of so many others, in blogs such as this, in videos, and in social media, that I found encouragement to keep at it. It felt like these voices were talking about me.

And in that positive lens, I found the light inside of me to bring forward the resiliency that until then had lain dormant.

No longer suppressed by someone else’s ideas of the way things “ought to be,” I continued on my newly discovered path. The more I focused on my own voice and the voices of encouraging friends, the more I grew to believe in myself.

Although for some, finding the right direction might require the journey of a lifetime, I do believe there is one direction in which we are all meant to go: forward.

By taking small steps each and every day, putting aside overthinking, and realizing that you have everything you need deep within, you can find the right direction in your life. And while it may not be the direction you expected, it will work out just fine.

Bob Miglani writes about learning to move forward in uncertainty in life and work on his blog called http://www.EmbraceTheChaos.com.  He works in New York City, helps his wife run her business, his parents run their Dairy Queen store and adores raising his two young daughters.