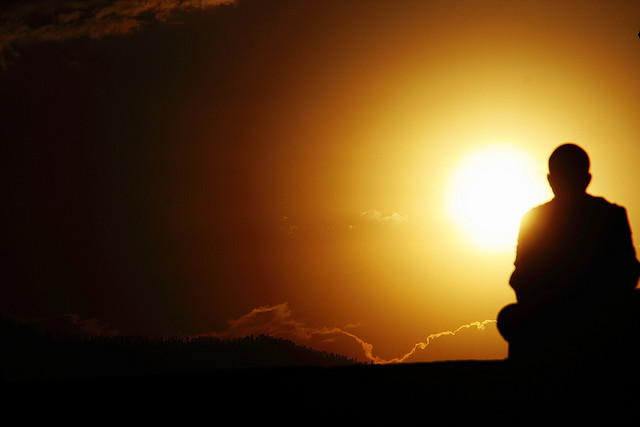 “Our lives improve only when we take chances and the first and most difficult risk we can take is to be honest with ourselves.” ~Walter Anderson

There’s almost nothing I hate more than honesty.

I’ll give you a moment to let that sink in. You may be doing a double-take, thinking “did she mean there’s nothing she hates more than lying?”

Most people probably think I’m an honest person, and in general, I suppose that’s true. I am honest with many people. However, I’m rarely honest with the person who matters most—myself.

As someone whose drug of choice is food, I’m familiar with all matters of sneaky and lying behavior. The best I can pin-point, this probably started for me around the age of six. In other words, I’ve had a long time to practice.

And I have to admit, I got pretty damn good.

I could wolf down an entire meal from McDonald’s on my way home from work, dispose of the trash on my way, and then sit down and eat another dinner when I got home.

I wasn’t as good at hiding candy wrappers when I was a kid—stashing them behind the couch where, surprisingly, my mom did occasionally clean. But I perfected the art over time, learning how to wrap one inside another inside another and then squish them down to make them look like one—instead of fifteen.

Come to think of it, I’m pretty sure I’ve even started a new art form called Trash Arranging. (I should probably trademark that.)

Here’s the thing: I like hiding. I don’t like spilling the beans about myself to a new friend (aka someone I’ve known for five years). I’m squeamish about social events, and if I can avoid the details of where I’ve been or what I’ve been doing, I will.

I realize what you’ve read until now makes it sound like I’ll soon have my own reality show akin to Hoarders, but I promise that’s not the case. What I’ve discovered about my own issues is that we all have them.

Mine’s food, but yours might be something else—shutting down at the holidays, drinking too much coffee, or working just a little (an extra 35 hours per week) too much.

Over the past few years, I’ve started to lift the rock up off my life. With the help of therapy, life coaching, more journaling than anyone probably thought was possible, and an extremely patient partner, I’m taking some steps into the sun of my own experience.

I’ve learned a few things about honesty along my path. And as much as I’d prefer to keep them to myself, I’m pretty sure that’s not how it works. So here we go:

Honesty can be hard.

This is the first thing to know because it’s super-duper true. If you’re not used to being honest with yourself, you can’t imagine the suckitude you’ll experience when you start. The good news is that you’ll probably only be able to dish it out in small doses, so you can get used to it over time.

You have to do the work.

If, like me, you are convinced that if you have a problem with honesty, it’s only a teeny-tiny one, hang on for a fun ride. Most of us are deceiving ourselves in any number of ways every day. Not all are dramatic as mine, but all require a commitment to the process.

The results are unbelievable.

Remember the depth of suckitude I mentioned? Well, that’s only rivaled by the heights of awesomeness you feel when you lift the oppressive burden of your lies. Sometimes you only glimpse it for a moment, but that feeling isn’t something you’ll forget.

For me, it’s not dissimilar to the high I feel after eating a really great cookie (or 20). But the difference is that the high of the truth isn’t laden with shame and guilt, which—I don’t know about you—are typically things I prefer to avoid.

I’ve been on 65 diets in my life. Yep, that number’s correct. But you know what? I swear I still thought I just hadn’t found the right one. That is, until I got really honest with myself and realized that the work I needed to do was internal, not external.

Now, this honesty thing isn’t only theoretical to me. It’s also for-real concrete, which is really what it has to be if you’re hoping for some change in your life. So not to worry: I won’t leave you hanging without some thoughts on how to peel the layers to your own truthy core.

You got a pencil? (Or mouse to copy and paste?) Okay, here we goooo…

1. Find something to write on or with.

You’re going to need to do some serious excavating, and there’s no place better to start than with your own thoughts. Ask yourself some questions: “Why am I doing X behavior?” “What don’t I want my best friend to know about me?” “What’s my next step?”

As you start to write on questions like this, some interesting things may come to light, which brings us to our next step.

No, you don’t need a therapist, life coach, or whoever because you’re messed up. You need outside assistance because you want to undertake a process to set yourself free. And that’s really best done with an objective ear and skills.

I mean, I know your Uncle Frank is a great listener, but seriously—his training may not be quite what you’re looking for.

4. See yourself in the future.

As I mentioned, once you get a taste of the freedom of honesty, it’s hard not to want more of that. So set your sights on a time when you’re living fully into your life, and then go from there—making that reality present a little more every day.

After all, if setting ourselves free in this lifetime isn’t our primary work, what is?

Anna Guest-Jelley is the Founder of Curvy Yoga, where she writes about yoga as the foundation of a life well-lived. She is also the co-teacher of 30 Days of Curvy Yoga and author of Rockin’ Your Curves: Pose Options for Curvy Yoga Practitioners and their Teachers. Connect with her on Facebook and Twitter.