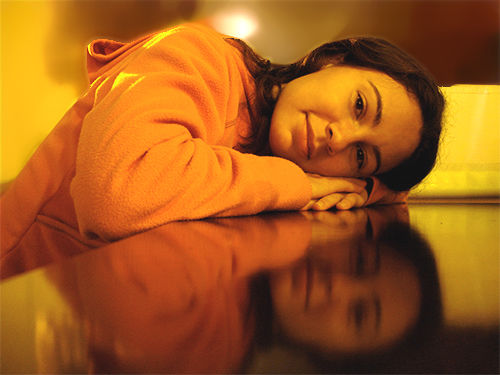 It’s a voice we’re all familiar with, and one that we all find challenging. Yes, the inner critic is the part of our internal dialogue that can make or break our day.

At its best, our inner critic helps us live in a way that’s true to our values, questioning decisions that we might regret later and keeping us on the straight and narrow. At it’s worst, however, an inner critic rampage can bring down our mood, self-esteem, and sense of self-worth.

Much of my own self-work has focused on my internal dialogue. My inner critic can be mean. She has completely different standards for me than for anyone else, and she knows exactly what to say to make my self-confidence crumble.

One aspect of my life my inner critic has been most vocal about is my work. After graduating, I started out as a freelancer, and then recently transitioned into running my own business.

My critic dealt with these transitions by telling me I was getting too big for my boots to think I could make a living working for myself, trying to convince me other people wouldn’t take me seriously, and criticizing everything from my earnings to the fact that I didn’t have a “real” job.

At a time when I was pushing myself outside my comfort zone, this was a painful experience that provoked all kinds of self-doubt and anxiety (plus many sleepless nights).

Calming my inner critic is a work in progress, but there is one tool that I have found invaluable for entering into a more productive dialogue with it: Journaling.

The inner critic only has power when we give it that power. Journaling has helped me learn how to not only keep the inner critic at bay in the short-term, but also to develop a more healthy and balanced relationship with this, and other parts of my internal dialogue, over the long-term.

Here are four ways you can use journaling to calm your inner critic:

Cheerleading is a simple journaling practice that takes a negative self-belief and turns it into an accepting and self-compassionate statement.

Negative statement: I hate my stomach. I hate the way it bulges when I sit down, and the way it hangs over my favorite jeans.

Cheerleading statement: I accept my stomach, and accept that it looks the way it looks right now. Any desire to change it comes from wanting the best for my health, not from a sense of not being good enough.

I accept my stomach, and know that it is just a part of me; I am not defined as a person by how it looks.

This exercise might feel unnatural at first. It’s easy to get caught up in the inner critic’s beliefs. Cheerleading not only provides us with an alternative perspective, but also helps us strengthen a more self-accepting voice. The more you practice it, the more natural this turnaround becomes and, consequently, the less powerful the critic’s statements become.

Our inner critics are capable of dishing out some seriously harsh criticism, but they’re there for a reason. Although it might not be immediately obvious, all of our internal voices are working in their own way to protect us—even the inner critic. When we are shamed and judged for things by other people, over time we internalize their beliefs and start shaming and judging ourselves.

The inner critic works in this way to curb our behavior, and prevent other people from shaming and judging us in the future. Because it’s really trying to protect us, the more we try to ignore and repress our inner critic, the louder it becomes. One way we can calm this voice is to talk to it, and write out the conversation.

When doing this, I find it helpful to bring forward a nurturing internal voice (also called the “adult” part or your “true self”) to act as a mediator.

Start by asking your inner critic to tell you more about a particular statement it made recently, or with a more general dialogue about your feelings. The aim of this is to start a constructive conversation that helps you understand and even empathize with my inner critic’s motivations.

When I realized that my inner critic was trying to protect me from the criticism of specific childhood figures—people I’m not around anymore—it was a lot easier to understand, accept, and reassure the critic. Consequently, the critic’s words became less powerful.

Like cheerleading, this exercise might feel unnatural at first (after all, talking to “the voices in our head” carries a degree of cultural stigma). Keep persevering, and you’ll soon be able to hold a constructive and calmer dialogue with your critic.

“Retrospecting” involves reading back over past journaling notes and looking at patterns, language, themes, and underlying beliefs. This activity is best done weeks or months after writing an entry so enough time has passed that you can read with a more objective eye. Consider the following questions:

Does your inner critic sound like anyone you know?

This could be a parent, other relative, a mentor, or anyone who played a significant role in your life as a child.

Does it have any recurring complaints?

Perhaps your inner critic focuses on specific characteristics or attributes, such as your appearance, your work ethic, or your interactions with others. When we identify these patterns, we can look at where they might have come from. My inner critic’s recurring complaints involve my appearance and the idea that I’m “anti-social”—both of which I was criticized for while growing up.

Is there any kind of truth in the critic’s complaints?

We’ve already talked about how the critic is out to protect us, and although it might not communicate with us in manner that’s easy to hear, sometimes it has a point. It can be tempting to dismiss our inner critic’s criticisms as meaningless, but they can be a useful indicator of when we might be behaving out of line with our values.

What do you think your critic is trying to protect you from?

There is a method behind the madness, so take a step back and try to empathize with your inner critic’s motivations, as I described in tip two.

4. Strengthen your other internal voices.

Our inner critics are here to stay and (as much as we might want them to) will not disappear any time soon. One way to balance out our internal dialogue is to make the critic comparatively quieter by strengthening our nurturing internal dialogue.

Beginning this process through journaling helps us strengthen this voice in writing, with the aim that one day we’ll be able to shift the process to real time and have a compassionate, empathic response counteracting the inner critic’s complaints.

The cheerleading exercise above is helpful for this kind of strengthening. You can also use journaling to return to situations that roused the inner critic, and retrospectively respond in writing with the kind of dialogue that would come from a gentler nurturing voice.

Having strengthened my own nurturing voice through journaling, it’s now a lot easier to access that voice internally when my critic appears.

The parts of our internal dialogue are like muscles: the more we use them, the stronger they become. Developing a supportive, empathic dialogue comes with consistent practice over time. With conscious care and attention, however, it is possible to shift our internal dialogue from criticism and blame to empathy and acceptance.

How do you calm your inner critic?

When Your Inner Critic Stifles Your Creativity: 4 Helpful Truths