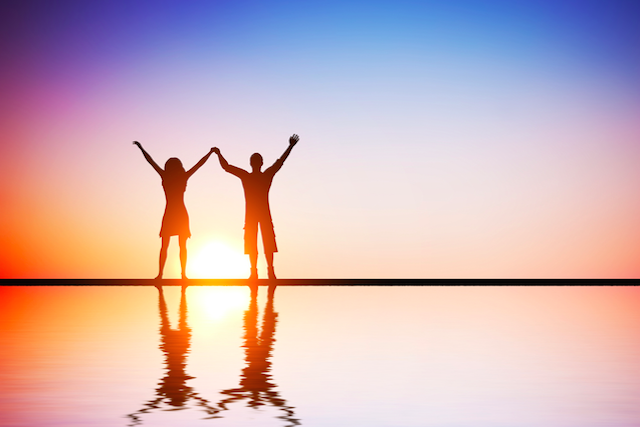 “I’m not great at relationships.” This is something I used to say all the time, to others and myself.

I’d had quite a few unhealthy friendships that ended in dramatic showdowns when our combined issues proved toxic.

My romantic relationships weren’t any less volatile—largely because my deep-seated shame affected the type of men I attracted and compromised my ability to be there, with and for others.

But even after making significant progress with my insecurities and working through some painful experiences from my past, I realized I still felt terrified of somehow messing up relationships.

I had to challenge my beliefs about myself, and I also needed to recognize and unload my subconscious self-judgment. Because when I said, “I’m not great at relationships,” I wasn’t making an objective observation. The unspoken ending to that sentence reads, “…and it’s because I’m lacking as a person.”

I needed to believe I was worthy of healthy connections, and capable of forming and sustaining them, even if I’d struggled in the past. Otherwise, I’d never allow myself to let my guard down, let others in, and then, freed from the burden of my own defenses, show up fully for them.

Over the years, I’ve identified countless limiting beliefs like these, and I’ve seen tremendous improvements in my relationships by releasing their grip on me.

We all have beliefs like this, and they can compromise our ability to show up for the people we love if we don’t acknowledge them and proactively work to let them go. Perhaps you’ll recognize some of these tendencies and beliefs in yourself:

1. COMPARISONS: If someone appears to be doing better than me in some area of their life, that means I’m less than—and I have to catch up to prove that I’m worthy.

We all want to feel happy for the people we love, and we want them to feel happy for us when we’re doing well. This can be challenging, though, if we allow comparisons to convince us we’re somehow behind and therefore inferior or inadequate.

The solution? Work on nurturing a sense of self-worth that has nothing to do with what we achieve. Every last one of us will experience highs and lows on our journey. Sometimes we’ll thrive when friends struggle, and vice versa, and sometimes we’ll thrive at the same time.

If we can work at valuing our efforts and ourselves regardless of the outcome, we’ll be better prepared for the inevitable lows, less attached to the highs, and more supportive of our loved ones—regardless of where they are in their journey.

2. SCORE KEEPING: If I don’t get exactly what I give, someone is devaluing and disrespecting me, so things always need to be even.

Nothing suffocates a relationship like keeping score. It communicates to the other person, “I suspect you’ll cheat me if I don’t keep track and remind you when you’ve fallen short.”

I’m not suggesting we give and give without regard for receiving. The key is to create an atmosphere of caring and generosity by giving without always expecting reciprocation, and then trusting that you’ll receive that same courtesy.

It’s about creating a team mindset and recognizing that we all have different strengths, and we all give in different ways.

I may do more laundry than my fiancé, but he’s an excellent cook. We each contribute in our own way, in all aspects of our relationship. (Keep in mind this isn’t always the case. If you always give and never receive—despite communicating your wants and needs—you may want to rethink that relationship.)

3. ASSUMPTIONS: I know why people do the things they do, and they often have selfish or hurtful intentions.

Formerly, I assumed the worst of everyone. If someone hurt me, they meant to. If someone did something I didn’t understand, they were selfish and thoughtless. Primed as I was with these cynical beliefs, I frequently brought out the worst in people.

That’s often what happens when you guard yourself with these kinds of assumptions; people guard themselves in return, and seem to confirm your fears.

The truth is we can never know why other people do the things they do unless we ask—and then trust the answer. More often than not, people are doing their best, just like we are, and would never intentionally hurt us.

Stephen Covey wrote, “We judge ourselves by our intentions and others by their behavior.” If we assumed that other people have positive intentions, we’d all judge each other a lot less, and feel better about each other, and ourselves, as a result.

4. EXPECTATIONS: If someone doesn’t meet my expectations, that means they don’t care or value me, or intended to hurt me.

It happens all the time: We expect a certain outcome, or response, and then we feel disappointed and disrespected when things don’t go according to plan.

Things rarely, if ever, go to plan. Even when we communicate our wants and needs, it’s entirely possible that someone else may fall short—because they’re imperfect, just like us, and dealing with their own challenges.

I’m not suggesting we don’t expect anything of anyone, but rather that we try our best to recognize and appreciate what people do “right” instead of maintaining a list of all the things we think they’ve done “wrong.”

Think back to when you were young. What would have motivated and empowered you more: being praised for your efforts, or being chastised for your shortcomings? The same holds true in adult relationships.

5. BITTERNESS: I can’t let go of what hurt me because that would be letting that person off the hook.

For years when I was younger I tried to maintain a relationship with someone while holding on to anger and bitterness. As a result, I unknowingly made this person “pay” for their lack of compassion in the past by treating them without compassion in the present.

Not only was I not “being the change I wished to see,” as Gandhi recommended, I was losing self-respect by becoming the very thing I’d condemned.

Eventually, I realized I needed to make a choice: I could let go and recreate the relationship anew, or let go and move on—but it was no longer an option to hold on to both the person and my bitterness.

Forgiveness may be “letting someone off the hook,” but that doesn’t mean we deserved whatever happened, or that it was okay. It simply means we’ve accepted it, and chosen to grow through it.

Nothing could be healthier for our relationships, with others and with ourselves.

Obviously, this is all a lot easier to neatly summarize in a list than it is to regularly apply. But we don’t need to tackle all of these beliefs all at once. We just need to try our best, each day, to recognize when we’re getting caught up in one of these limiting beliefs.

Even the tiniest bit of progress can make a huge difference, so give yourself credit for every small shift you make and then watch as they all add up.

This article first appeared in Best Self Magazine, the digital magazine for the next generation of seekers and doers. Couple silhouette via Shutterstock.

What Heartbreak Taught Me About Creating My Own Happiness