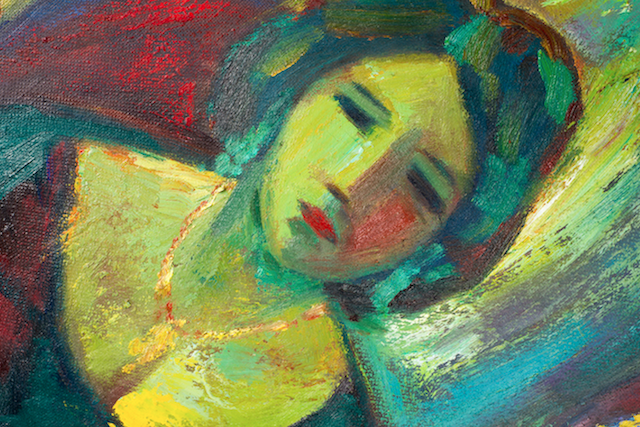 When I was eighteen I went through a very stressful period, which led to the onset of panic attacks. I often remember how in bed one night I was suddenly overwhelmed by a feeling of terror. I’d never experienced such fear before. Sure, I was scared of lots of things, but this new feeling was unique.

The most accurate way I can describe it is a kind of animal-like horror. It seemed to have come from the deepest, darkest recesses of my subconscious mind, caused by primeval, bestial mechanisms.

The feeling was so deep and all encompassing that it was as if nothing else existed, just this fear coursing through my body as I writhed about, sweaty and tense.

The most unfamiliar and therefore terrifying aspect of the fear was that it didn’t have an object: it wasn’t clear what I was actually afraid of. From the very start, it was simply fear—unconnected to any tangible thing.

That night marked the beginning of my period of panic attacks. Over time, depression, anxiety, sleep problems, and general health issues augmented these.

At the age of twenty-four, I started to fight back; with the help of meditation I managed to get over my depression and panic, and now they no longer torment me.

During my struggle I came to realize that I was hindering myself with mistakes I was making, and it was only when I overcame these that I started to make real progress.

I often talk with people who have been or are going through the same kinds of problems, and I notice just how many of them also come up against these mistakes. So what are they?

When we feel a bad mood, depression, or panic coming on, our first wish is to get rid of it as quickly as possible, to change the “bad” mood into a “good” one. This is natural; it’s how we’re made. But all too often our attempts just make everything worse.

Resistance forces us to think constantly about our condition, to focus all of our attention on it, to feel bad because it won’t go away, to wait tensely for relief.

The simple truth is that you can’t control everything. Attempting to get your condition “under control” often leads to extra stress and unwanted bad feelings. It’s sometimes best just to let go and cease resistance.

If we relax and let our depression or panic come, without trying to control anything, accepting that they’re only temporary feelings that will pass in due course, things become much easier.

We start to have thoughts such as “I’m going to die or go crazy,” “This’ll never end,” and “I hate that I can’t enjoy life like other people; I feel utterly miserable.”

Our mind starts to add new fears and negative emotions to the depression we already have. And, as I saw for myself, these fears and feelings end up constituting the main part of our condition.

It’s actually your mind, not the depression and panic themselves, which makes each episode so unbearable.

If you don’t believe me, try this experiment: The next time you’re overwhelmed by an attack, try to simply observe it without getting caught up in or assessing it in any way. Just watch it in its pure form, without any thoughts. Try to notice which parts of your body you feel it in and how it comes and goes.

In this way, you’ll remove your mind from the formula of your distress. You’ll notice how much weaker the attacks become when they’re no longer supported by your thought processes. Give it a try, making notes of the results if you like. Would it be true to say that it’s not all as terrifying and dreadful as it seemed at first?

When you stop feeding your depression with fears and thoughts it becomes much easier to shake off.

“Everything was so good when I wasn’t depressed! What an amazing time it was, and how awful it is now. Why can’t I go back?!” These are the kinds of things many people think, me included, but such thoughts bring nothing but harm.

If you want to beat depression or panic, you have to stop comparing. Forget that there’s a past and future. What’s happened has happened. Don’t dwell on it, and instead live in the here and now.

Start with what you have, and don’t think about how it all was before. Learning how to live in the present moment will make your depression or panic much more bearable.

Many people spend hours asking themselves all kinds of questions: “When will this end?” “Why me?” and “What have I done to deserve this?”

To make use of a well-known Buddhist parable, these questions are as much use as trying to figure out the source of the arrow which blinded you: it’s just not that important. What you need to know is how to pull the arrow out.

Questions of the “Why me?” ilk just make your condition worse, forcing you as they do to complain and be upset about something that’s already happened. Focus on what will help you get past your depression and don’t bother with questions which don’t serve this purpose.

We think that because we experience such fear at the idea of going outside, meeting people, or going on the underground, it means that something bad is going to happen. There’s nothing surprising in this, because nature has made fear in order to warn us of danger. We’re made in such a way that we instinctively believe this fear and respond to it.

But our fear hardly ever arises due to a real threat. For example, the fear of losing your mind or suffocating during a panic attack is simply fallacious. Stop believing this fear. Whatever it is you’re afraid of at these times isn’t going to happen.

Fear is nothing more than a feeling, a chemical reaction in your head. If you’re overcome with terror when you go down into the underground, it doesn’t mean that something horrific is laying in wait there. It’s like a malfunctioning fire alarm—just because it’s going off doesn’t mean there’s actually a fire.

So stop listening to your “inner alarm” every time it goes off. Don’t pay it any heed: go out, meet your friends, get on a plane, and let the alarm keep ringing. Nor should you try to “switch it off,” as this doesn’t always work. Just ignore it. In other words, stop taking your fear as something real.

6. Seeking reasons for your depression in the outside world.

This is another mistake I made myself. I thought that my malaise was linked solely to the way my life and work were going. I believed that if I could just change that, I’d be happy.

But then, with meditation, I realized that everything I needed to be happy was inside me, and likewise what was causing me to suffer!

I was so edgy, anxious, feeble, caught up in bad habits, undisciplined, and irresponsible that even if I’d succeeded in changing the external circumstances of my life, the traits that had given rise to my depression would still be there.

So don’t keep telling yourself, “If I get a new job, everything’ll be smooth sailing,” or “If I get rid of everything I’m scared of, there won’t be anything to be afraid of any more.” Your depression and fears reside inside you, so wherever you are, they will be too, projected onto the outside world.

Of course, this doesn’t mean that you shouldn’t strive to improve your life. First of all, though, you need to direct your efforts inwards.

Now, when I look at these mistakes and remember making them myself, I can see the one thing that unites them.

The reason we make them is that when depression or panic pounces on us, we start to think and act in the way our instincts and gut feelings tell to us. “Be afraid, run away, resist, danger awaits you everywhere, you’re trapped,” they whisper.

Tuning in to this during a bout of depression aggravates our situation. This is because our mind, emotions, and instincts are strongly conditioned by depression, so listening to them is like listening to the voice of a malicious, invisible demon intent on leading you to ruin.

To free yourself from depression once and for all you have to drop all your notions of common sense; abandoning your sense of reason, you must act against them.

Don’t resist your depression, accept your fears and allow them to simply pass; don’t get caught up in them and don’t believe them; don’t compare your current situation to how it was before—all things that feel illogical when you’re in a state of terror or intense depression.

What I’m advising may seem to be the polar opposite of what your gut encourages you to do. But it’s precisely because people continue to give credence to and obey these feelings that depression is such a widespread complaint. You need to act somewhat paradoxically to get rid of it.

My own experience has convinced me of this. The understanding I reached allowed me to come through my difficult situation and continues to help me cope with challenges I encounter on my journey.

Nikolay Perov formerly suffered from depression, panic attacks, addictions, laziness and communication problems. He coped with the help of meditation. His blog (also available in English) became popular in Russia, his native country. It has helped a lot of people get rid of depression, nervousness and alcohol problems and discover the new meaning of life. Read him on nperov.com!

Inside a Panic Attack: What It’s Like When Anxiety Strikes