6 Reasons Why We Can’t Give Up
By Kaylia Dunstan 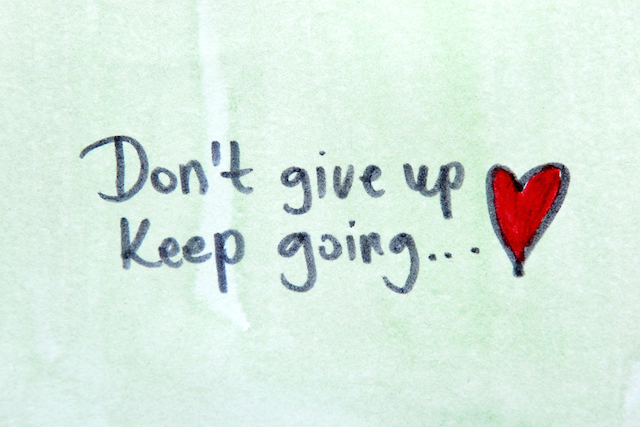 “The minute you think of giving up, think of the reason why you held on so long.” ~Unknown

I was a serial “giver upper” for so much of my youth.

I tried gymnastics when I was about six until I discovered the teacher smoked. I’m not sure why I had an aversion to smoking at the time, but I can remember frowning and stamping my foot a lot about it.

I tried tap and ballet until I realized that the teacher was some kind of Roald Dahl headmistress. She would thump around the classroom scaring the crap out of us, and as a result none of us looked elegant and poised.

I tried horse riding until the horse turned psycho and kept throwing me off, including throwing me into a fence. It was a very big horse, at least for a little girl.

I’d write plays and novels until another idea distracted me and floated out the window, and I saw it as my destiny to run after it until I got lost.

I’d become passionate about causes until I realized that fighting the cause would involve too much sacrifice. Sacrifice for a cause? Who would have thought?

If things became too hard I would give up and move on. But the older I got, the more I regretted giving up on some of these things.

By now I could have been touring my play, “Horse Lake – One Woman, Sixteen Horses, and a lot of Ballet and Tap.” Intriguing, huh?

Seriously, though, I was becoming more and more aware that my lack of capacity for sticking with things meant that I was missing out on experiences and ways of being that were deeper, more beautiful, and more satisfying that were just over the mountain if I decided to keep climbing.

I also saw terrible and sad things that needed to be righted, that needed dedicated and brave people to fight and to not give up until things changed.

I saw people that had lost too much, that were worn out, that were on the edge of giving up every day who needed hope.

I saw a world that was turning more and more toward quick stimulation and transient passions. That was turning away from long-term endeavors and stickability. That was in need of a call to keep going, to go deeper.

So I decided to change. Little by little, I decided daily that I was going to stick with the things that mattered to me.

I still gave up on things that didn’t matter, but I decided I was going to hold true to what did. I’ve seen a slow change and experienced a deepening and a wonder that I didn’t know existed.

I wrote this for all of us that are on the edge of giving up to remind us that there is beauty if we can just keep going. We can change the world. So here are six reasons why we can’t give up. Can you think of any more?

We’ve heard this so much we’ve forgotten what it really means.

The American poet, Walt Whitman, once wrote, “I am large, I contain multitudes.”

We have hundreds of layers. These layers shift and blend. They form new permutations every day.

For this reason, and this reason alone, we can’t give up. The complexity of our character means there will never be another us. Ever. That’s incredibly precious.

What are we going to create from us?

2. Some things are worth fighting for.

Isn’t that what we said when we started this journey? There’s an imbalance and we wanted to right it. There’s beauty that’s yet to be explored. There’s a breakthrough that hasn’t broken through.

Guess what? This hasn’t happened yet.

We can’t give up because it’s up to us to change the world. There are misguided or ignorant or arrogant people who are doing things to hurt. There are dear people in need of beauty, kindness, and revelation.

We wanted to make our lives better. If we give up things won’t change.

The unique beauty will be lost. The imbalance will remain. We won’t be able to see the ripples of our actions because we took our hands out of the water.

3. We are part of a beautiful world.

Yes, there is suffering. There are those that hurt. But there is also a beautiful world.

If we keep going we can touch others. Touch the sky. Rescue the earth. Explore for the rest of our lives. So let’s not give up.

Whatever block we are coming up against, whatever pain we are feeling, whatever swamps us and threatens to destroy us—it will pass. Eventually, it will pass.

When we persevere we get to know ourselves better. We have the opportunity to work with our challenges. We can speak to them. Spend time with them. Until eventually, on a glorious day, we bid them farewell and walk on. So much wiser and deeper than before.

But if we truly still believe, if all roads lead to this, let’s not think about starting again. Just the thought of it is exhausting. It feels hopeless.

Let’s remember how good it felt when we began. Let’s make a decision to keep going. Let’s keep our focus on hope.

We don’t want to repeat and repeat. We want to move forward.

We are amazing for trying.

We are imperfect, but it’s so admirable and brave that we are doing everything we can to grow.

We are talented and have the capacity to completely honor our talents.

Our passion for spreading more love and care will help people in ways we can’t even imagine.

We are still loved if we give up. But right here, right now, we can remember how passionate we felt when we began this journey.

We don’t want to regret things. We want to grow, to fight, and to shine.

The world has a rhythm. It is one of resistance and overcoming. It is the wave holding itself before it breaks into foam.

If we move against the winds we must expect resistance. We can also expect a new world that greets us.

There will be days of soft sunlight and tears of delight. Whatever the journey, we must keep walking the road. We can’t give up.

Don’t give up image via Shutterstock

When Things Don’t Work Out: Who Knows If It’s Good or Bad?