How to Avoid End-of-Life Regret: Stop Giving Your Life Away
By Sandra Cooper 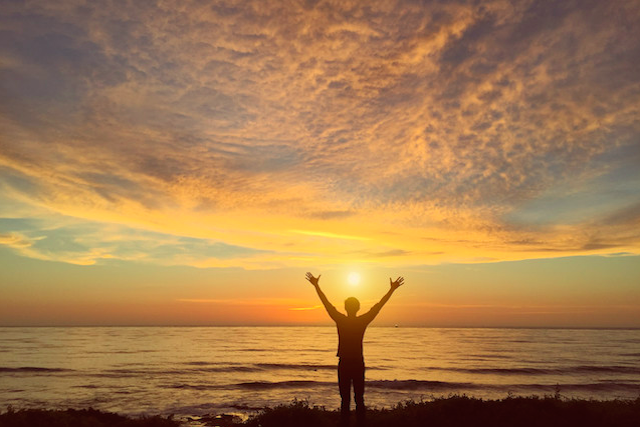 “One day your life will flash before your eyes. Make sure it’s worth watching.” ~Unknown

Do you ever wonder what life is all about? You may wake up day after day and go to a job you can barely stand. You might be in an unsatisfying relationship that’s on its last breath, yet you can’t seem to let it go.

Maybe you spend more money than you have, or you eat or drink too much because it’s the only thing that distracts you from your misery. Whatever the distraction, you know you are unhappy, but powerless to know what to do about it.

In my early twenties, I had finished college and was working at my first “real” job. My graduation allowed me to become commissioned as an officer in the Army National Guard. Most importantly, and best of all, I was in love. I was on a personal and professional trajectory and right in line with societal norms.

The next step in my carefully predicted life was marriage and a family. My life was unfolding before me like I thought it should, and I was content to ignore the gnawing discontent that had been quietly eating away at my insides, for as long as I could remember.

Unfortunately, or fortunately, when the “love of my life” brought our relationship to a screeching halt, I was devastated. Like, I wanted to die, devastated.

My body froze in time, and I was unable to move with any sense of direction or intention. I was lost, as grief washed over me in relentless waves, threatening to drown me. Life had thrown me overboard, and I was not wearing a life vest.

The truth is, all those overwhelming feelings had less to do with him and more to do with feelings that had been living inside of me long before he came along. He just reminded me they were there.

Do you know the feeling? The feeling of the bottom completely falling out of your world, leaving you with nothing to stand on? That relationship was not my destiny, but it would turn out to be a critical turning point in my life.

Obviously, I did not die. After crying countless tears and dragging myself out of bed every morning for a few months, wondering what I was doing with my life, I made a decision.

I had four months of Officers training to complete at Ft. Sam Houston in San Antonio, Texas, so I decided it was time to fulfill that commitment. So for four months I worked hard, played hard, made some fantastic new friends, and got paid for it all.

Something unexpected happened. An unfamiliar feeling of lightheartedness began to possess my body, and my eyes were opened to the seriousness with which I had been living my life.

When my time in Texas came to an end, the thought of returning home wrenched my gut with dread. The feeling was in stark contrast to the lightheartedness I had been feeling. This got my attention.

Something had changed, and I could not return to life as I had known it. What I had not yet realized was that it was me that was changing.

I was discontent in all areas of my life, and that relationship helped me avoid it. It wasn’t until the breakup that I was forced to take notice.

I was barely twenty-four years old, and I was miserable. So despite opposition and my own anxiety, I stopped complying with my perception of societal expectations and I started to follow my gut. I followed my feelings.

I wanted to travel. Some said I was running away from things; nonetheless, I believed, instead, that I was running towards something. I had come to realize there were a multitude of voices in my head all vying for my attention.

Family, friends, religion, and society were all scrambling for possession of my mind, and I had been trying to live my life the way I thought I should.

I honestly did not know what I wanted, so used to pleasing others first. At that moment in time, what I did know is what I didn’t want. I did not want to go back home.

So I planned a trip with my youngest sister. We spent two and a half fabulous, fun, carefree months traveling and exploring the western U.S., camping and backpacking.

While in California I met a woman who had backpacked Europe, and I knew immediately that was to be my next trip. After my western U.S. exploration was done, I returned home to plan a trip to Europe.

After a couple months of planning, I traveled alone to Europe, where I spent four months backpacking Western Europe, the Mediterranean countries, and Egypt. All because I began to listen to my gut, to my feelings and desires, rather than all the voices in my head telling me what I should do.

I was learning that taking care of myself and making decisions for my life based on what was right for me, rather than others, was a priority. I don’t mean that in an irresponsible, indifferent way. I mean it in a “this is my life and I get to live it my way” kind of way.

So, as it turned out, the ending of the relationship that I thought would last forever was one of the best things that ever happened to me. Not because he was a bad guy or would have made a lousy husband, but because his ending the relationship woke me up.

It was not his job to be my “happily ever after.” It was mine and his leaving forced me to begin to figure that out.

Many of us expect others to make us happy and to fulfill our dreams, never knowing that we have the ability to do it for ourselves. Trust me when I tell you, you will be most happy and most contented when you do. Your relationships will be healthier when you do.

Here’s the hard part: It means taking a chance. Maybe risking failure, maybe finding success. Likely feeling very uncomfortable—at least for a little while. But if we don’t try, we will never know. We will never grow.

It can be difficult to make decisions that go against the grain, especially if we anticipate being rejected by or disappointing to someone close to us. I know, I lived it. Hard as it was, it was the best thing I ever did for myself.

Keep what works for you and get rid of the rest. The limits we face are usually the ones we place on ourselves. We can blame no one else if our life is unsatisfying. Take small steps, but take a step.

I came to further understand how important that was years ago, while working as a hospice nurse. That work became my teacher, as I recognized very quickly who had lived a fulfilling life and who had not.

It was easy to see the peace and acceptance of the contented and fulfilled, which highlighted the sad and painful turmoil of those with regrets.

Those most at peace were the ones who had faced their fears, who’d taken chances, while risking losing. Those in turmoil had avoided themselves, their pain, their fears, and their dreams. They stayed safe or distant and disconnected and regretted it in the end. They suffered as a result.

Life is an invitation to grow and to make a difference. You are important. You are needed. Don’t be the one dying with regret. Do not waste another minute being afraid to break out of your rut. Take a chance!

Discover your passions. What makes you come alive? What gets you excited? What do you want? What is your gut telling you to do and what are the fears holding you back? Whose life is it?

It’s your life. Live it!

How to Avoid a Soul-Crushing Life Crisis