7 Courageous Steps to Reconciling a Struggling Relationship
By Alison Chrun 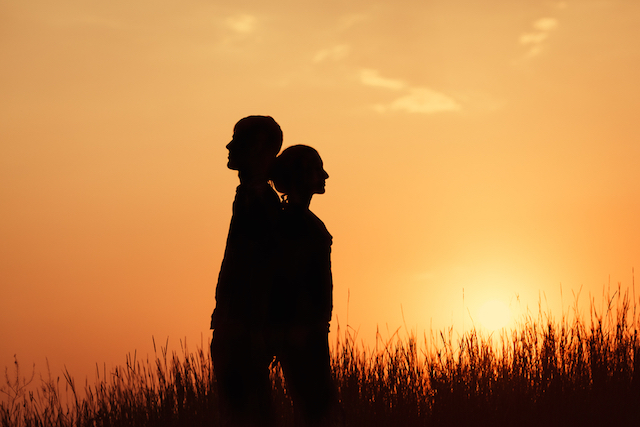 “Peace is not absence of conflict, it is the ability to handle conflict by peaceful means.” ~Ronald Reagan

I have always had a tumultuous relationship with my mother. One filled with conflict, anger, and struggle.

After years of non-communication, miscommunication, arguments, and fights, I realized it was time to reconcile what was left to whatever degree we were both capable.

I had to let go of the past and get honest with myself—because whatever I was doing on my end was not only hurting our relationship, but also killing me from the inside out.

I was crying out for resolution with my mother, not because I didn’t think I tried hard enough in the past, but because I knew I would regret it if I didn’t.

This didn’t mean she would accept my feelings, or that we would suddenly become the best of friends. It was an opportunity to become the best versions of ourselves for this relationship—whatever that meant—whether we spoke every day about the weather or just on major holidays to say I love you.

Now here I stand with a mother in my life and a relationship to go with it.

And to be honest, it’s not the mother-daughter relationship I always wished for. But I am content and at peace with what we have now rather than what we didn’t have before.

It’s a place where we can co-exist peacefully while respecting and loving one another.

It is a relationship, and it took courage.

Some relationships aren’t meant to be reconciled, and that’s okay. But that is a choice each of us must make. You must ask yourself, is this what I truly want?

The following seven steps contributed to the reconciliation of my relationship, and I hope they do the same for yours.

1. Stop lying to yourself.

If we lie to ourselves about what is okay and what is not, we are setting ourselves up for a major letdown.

If something is not sitting right with you, don’t ignore it. Acknowledge your feelings, then promise yourself you’ll do something about it.

My strained relationship with my mother was unsettling. I needed to acknowledge my feelings and make a plan of action to address it rather than ignore and repress.

Once I became honest with myself, I felt a responsibility to confront the uneasiness inside. Doing so gave me a greater sense of control over myself rather than the issue having control over me.

Being assertive is a way of holding yourself accountable to the promise you made, and it’s the first proactive step toward letting the other person know you want resolution, not dissolution.

I made the first step in contacting my mother. It wasn’t easy. I swallowed the big pill of pride I had in the bottom of my throat and trusted myself.

I didn’t know if she would be receptive to me, but it was a risk I was willing to take.

Making the first move to repair what’s broken isn’t a sign of weakness; it’s a sign of complete courage.

Being vulnerable is a way to display that you’re coming from a place of peace and honesty. It’s not always easy, but if a relationship is worth it, it won’t be as hard as you think.

Stay committed to avoiding defensiveness. Tell yourself that you may experience some, along with resistance from the other person, but that’s okay.

When speaking to my mother, I expressed my pain. It came from a pure place where I was able to be completely transparent to her in such a way that she could meet me for the first time, yet recognize all that was familiar to her.

I was honest, loving, forgiving, and vulnerable; it was the only way to show my true self.

4. Get vocal and keep an understanding ear.

I confided in my mother about the effects our falling out was having on me. I say confide because I never told anyone else. No one else in my world could relate except my mom because she was hurting too.

As hard as it was to hear the pain I had put my mom through, it gave me the clearest vision of what she had been experiencing. We were given an opportunity to understand and forgive each other.

Be willing to give as well as take.

Compromising is a fair and expressive way of giving your relationship love and attention.

It doesn’t mean you have to sacrifice your values or beliefs.

It simply means that when both parties are asking for something, you’re both willing to give as much of yourselves that you are comfortable with, as well as take what you need in order to be happy.

Just as I told my mother what I needed from our relationship, and what I would and wouldn’t stand for, she did the same. We compromised and agreed to give to each other in places where we felt we needed more support.

A common misconception about boundaries is that they are meant to keep people or feelings out. That’s far from the truth.

Boundaries are there to show respect to yourself and others.

If something makes you uncomfortable, a boundary is set to tell others that it’s not okay to cross. You wouldn’t want to intentionally cross another’s boundary knowing it makes them uncomfortable, so why would you allow someone to do that to you?

One of the biggest obstacles my mother and I had to overcome was our lack of boundaries. We ran all over each other as if respect didn’t exist—because, well, it didn’t.

Once I established my boundaries, I felt safer. She communicated her boundaries, and it was as though a respect was born between us.

Setting boundaries is key to earning and giving trust, which is the foundation of all healthy relationships.

The action of the relationship, especially when reconciling, is crucial. Trust has to be rebuilt, so the action needs to be seen as well as the words being heard.

My phone calls and texts to my mother might seem like a minimal action to some, but for us, it’s major. It’s far more than we had in the past, and it’s what we said we would do, so we do it. It holds us accountable for keeping this relationship moving forward and not stagnating.

Whatever the action, if you can make time to be fully immersed in your relationship when you’re together, it will create a sense of security and keep you moving forward.

Relationships can feel like marathons, especially the difficult ones. They can feel like a race you can’t ever seem to win, but that usually means the techniques you’re using aren’t working.

It’s okay to fall, fail, be wrong, get mad, and be frustrated. We are human. And as humans, we thrive and survive off of the relationships we make and maintain throughout our lifetimes.

Give yourself and your relationship that chance to succeed. It’s not easy. It’s painful, it’s exhausting, and it’s humbling.

Imagine yourself running around the same track engulfed in a thick layer of fog for months, or even years. That’s your struggling relationship.

Imagine how exhausted you feel. Imagine how you’re blinded from seeing anything else around you because you’re in the thick of it. Those are the issues in your relationship.

But if you keep pushing through by following these seven courageous steps, it will pay off.

Now, imagine yourself committing to that action and one fine day, after all your hard work, you run from the wet, pale fog into the warmth and light of the sun.

And for the first time in a long time, you can see clearly all around you.

You stop running and just breathe.

That feeling of relief is the feeling I felt after reconciling with my mother, and it can be the relief you feel when you reconcile your struggling relationship.

Back to back image via Shutterstock

Alison Chrun is a wife and mother of two boys who is receiving her M.A. in Marriage and Family Therapy. She is the author at Appetite for Honesty where she writes about self-development, relationships, and the highs and lows of parenting.