A Guide to Peace for Anyone with a Crazy, Messed Up Mind
By Richard Paterson 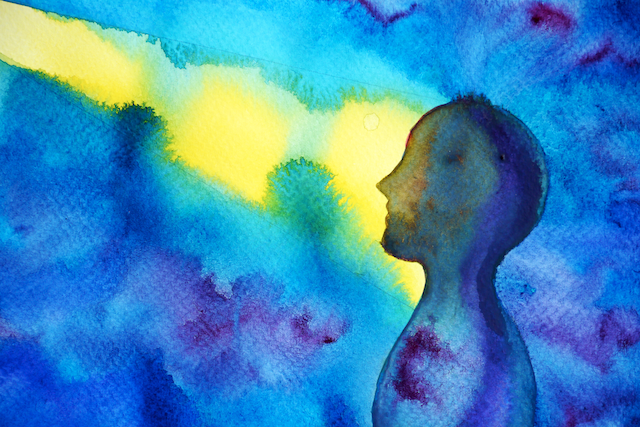 “No thought has any power. You have power. And when you identify and believe in the thought, you give power to the thought.” ~Mooji

It was 2004. I was on day three of a six-month meditation retreat, and my restless and turbulent mind was driving me nuts.

The prospect of sitting on this wretched cushion for another five minutes (let alone six months) was freaking me out.

“What on earth have I let myself in for? This is a crazy idea. I want to go home.”

My restless monkey mind was more like King Kong on amphetamines.

“No, remember how messed up you were before you arrived—and the crazy synchronicity that led you here,” a second, conciliatory voice chipped in.

Destiny had indeed dragged my ass across the world onto this bright red meditation cushion in mysterious ways.

Long story short, my housemate Jack had come to this meditation center after spraining his wrist and having to pull out of a yoga retreat he was supposed to attend in the US.

A few days later, he called me to say he loved it there and believed he’d found his teacher. He was really excited.

At the time, I was going through a particularly difficult period in my life. I had hit a brick wall and had no idea where to turn. So you can imagine my delight when I received a message from Jack, saying, “You’ll never guess what happened. I was talking to my teacher about you and he said, ‘Tell him to come to Canada as soon as he can and not to worry about the money. Just come.’”

Ten days later, I found myself perched on a bright red meditation cushion on a stunning property in the Canadian Rockies.

And this is where the real story begins.

As I sat on my cushion on day three, my restless mind was spinning out on overdrive. I needed help.

Unable to sit any longer, I stood up and approached the head monk:

“I’m really struggling here. I need to talk,” I said.

The conversation that ensued remains etched in my mind to this day. It went something like this:

“What’s the problem?” he asked with a look of compassion.

“I can’t stop thinking,” I replied.

I was taken aback. It wasn’t the answer I was expecting.

“Nobody can. If you didn’t have a crazy, messed up mind, you wouldn’t be human.”

“But I’m going nuts. My mind is driving me crazy,” I pleaded.

“What the mind gets up to needn’t be any of your business,” he continued. “You are suffering because you’re open for business. You need to shut up shop. Just relax, be alert, and focus on your breath. Let the thoughts come and go without resistance. Leave the mind in peace to do its thing and it will leave you in peace to do yours. The mind can only trouble you if you entertain it.”

If You Didn’t Have A Crazy, Messed Up Mind, You Wouldn’t Be Human

Boy, that’s quite a statement!

We tend to see ourselves as special cases.

Nobody is quite as screwed up as I am, right?

If people only knew the nonsense that goes on inside my head, I’d have no friends at all, right?

Over the following six-month period, many of my long-held beliefs about the nature of the mind and the causes of suffering crumbled away.

When I showed up in Canada, I was riddled with self-judgment. I believed that finding peace (if it was even possible, which I doubted) would be a monumental task, requiring a complete overhaul of my broken mind.

Here are some of the key points I came to understand:

Over time, I began to grasp and apply what my teacher meant by shutting up shop and minding your own business.

I learned that the key to experiencing ongoing contentment is to leave the mind in peace to do it’s crazy, messed up dance—in other words, to mind your own business.

“Allow thoughts to arise but don’t give them a place to land.” ~Papaji

Peace is the natural consequence of not minding what the mind gets up to.

Fast forward six months and I was a person transformed.

I was now finding my time on the cushion enjoyable and hugely rewarding. I was quite prone to experiencing blissful episodes… even with a chaotic mind. I had never known peace like this before.

I had also, much to my own surprise, taken my novice vows as a monk and received a new name. I wondered how that was going to go down with my family at home!

The following are seven key lessons I learned for dealing with an unruly mind to experience ongoing peace.

The first and most important step toward reclaiming your peace is to create some blue sky between you and the mind—to see your thoughts as objects rather than being enmeshed in them.

Thoughts are like clouds floating across the vast sky.

And it’s the same with the mind.

Thoughts constantly change but your awareness is like the sky— vast and unchanging.

Learning to step back and observe the passing thoughts with an attitude of dispassion and non-judgmental acceptance is the key to experiencing peace.

The thoughts are not the problem. The real issue is your identification with them. Recognizing this can transform your life in an instant.

2. Know there is nothing wrong with you.

This was a big one for me.

An ‘unholy’ thought appears in your head—a judgmental thought, a resentful thought, or a jealous thought—and you beat yourself up for having it.

You believe that you shouldn’t be having thoughts like these—that there is something wrong with you.

Well, there is nothing wrong. Everybody, without exception, has these kinds of thoughts. It’s called being human.

The mind is part of the human apparatus, just like arms or eyes.

It is very much like a computer. Your cultural conditioning, your DNA, and your unique set of life experiences determine the thoughts it churns out.

Given your background and history, your mind could not be producing thoughts other than the ones it’s producing.

Your thoughts are not personal. They are part of your programming, part of the human condition.

3. Roll out the red carpet.

When thoughts you label “good” enter your awareness, they meet with no resistance. You are quite happy for them to hang around.

When you label a thought as “bad” or “undesirable,” you reject it. It’s unwelcome.

It is this tendency to judge unwanted thoughts as bad or wrong that creates suffering.

Thoughts are not inherently good or bad. You make them so through your labeling. They are neutral events passing through your awareness and left alone, have no power to make you suffer.

Let them come and go. Remain as the observer. Don’t give them a place to land.

Roll out the red carpet for all thoughts—the good, the bad, and the ugly.

Treat all thoughts as honored guests and watch your peace and happiness blossom.

4. The mind is a bigger liar than Pinocchio.

“I discovered that when I believed my thoughts, I suffered, but that when I didn’t believe them, I didn’t suffer, and that this is true for every human being. Freedom is as simple as that. I found that suffering is optional.” ~Byron Katie

Take everything the mind tells you with a large pinch of salt.

Question, in particular, your beliefs and assumptions.

Every day, we unconsciously make so many assumptions.

If you dislike your job, for example, you probably make the assumption, before you even leave the house in the morning, that your day won’t be enjoyable.

Be innocent. Be prepared for surprises.

Ask yourself the question: “Do I know for certain that this belief, this assumption, is true?”

Can you find evidence to support the opposite?

You may well find that it is surprisingly easy to disprove some of your long-held beliefs.

Thoughts are self-arising. They appear by themselves from nowhere. There is nothing you can do to stop them from appearing. It is simply the mind doing what it does.

Thinking, on the other hand, is a choice.

A thought such as: “She hasn’t called for two hours” triggers a stream of thoughts:

“Did I say something wrong? Maybe she’s having second thoughts? She probably finds me unattractive. She looks like she works out a lot. Maybe she thinks I’m not good enough for her.”

This is thinking (and it is also based on unfound beliefs).

The original thought arrived by itself. You didn’t choose it. The resulting stream of thoughts, on the other hand, is something you can choose to indulge in or not.

Thinking is a choice. The more you become aware of your tendency to do this, the easier it becomes to stop yourself mid- sentence.

Most of our thinking is unconscious. We create so much unnecessary suffering for ourselves through a simple lack of awareness.

6. Know you are not your thoughts.

Think of it logically.  Anything you can objectify cannot be who you are.

I (the subject) am aware of the book (the object) lying on the table. Therefore, I can’t be the book.

You can apply the exact same logic to thoughts, feelings, emotions, or the mind. Anything I can observe, I can’t be.

Anything I call “my”—my thoughts, my feelings, my emotions—cannot be me.

When you believe you are your thoughts, it is natural that you will judge them as “bad” or “wrong” and judge yourself for having them.

Another metaphor used in meditation is the analogy of the screen and the movie. If there is a fire in the movie, the screen doesn’t get burned.

The awareness that you are remains untouched by anything you are aware of. Your thoughts are not you. They are events passing across the screen of your awareness. Who you are doesn’t change.

The awareness that you are doesn’t know happiness or unhappiness. It is only aware. It is always at peace.

7. Withdraw your attention from the mind.

When I first ‘got’ these simple truths, I had a massive Homer Simpson “DUH” moment.

Why doesn’t everyone see this? It’s so obvious.

And yet, without having had it pointed out to me, I would never have seen that engaging with the mind is optional, not obligatory.

Having better understood the nature of the mind and the difference between thoughts and thinking, I now give it far less importance than I used to.

I am much happier as a result, regardless of what kind of thoughts appear.

Fear thoughts, doubt thoughts, and anger thoughts continue to arise as before. Now I know it’s simply the conditioned mind doing its thing. There is nothing wrong with any of it. I only suffer when I unconsciously resist or judge.

Happiness is not about the absence of unhappy thoughts, feelings, and emotions. It comes from understanding that I am not defined by any of these. They are free to come and go as they please.

The mind has as much or as little power over you as you give it.

The mind is not your enemy. It is your most valuable ally—an incredible servant that is always there for you to use as you choose.

“Mind: a beautiful servant or a dangerous master.” ~Osho

Richard is a former monk, spiritual coach, and author. His blog, Think Less and Grow Rich, is dedicated to helping people quickly break free from the clutches of an overactive mind to experience more peace, joy, and inner freedom. Grab a free copy of his popular book Kick the Thinking Habit here. Or watch his free Masterclass, 4 Simple Ways to Make Instant Peace With A Troubled Mind, for a taste of his unique approach.