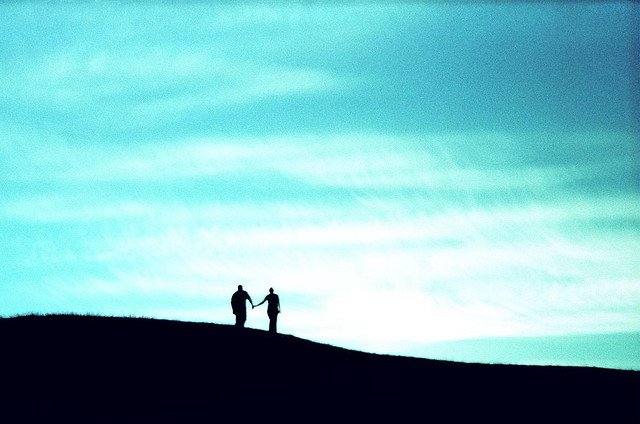 A couple of months ago, I had one of the best and worst weekends in a very long time.

My best friend for the last 15 years was getting married, and I was in the wedding party. We spent most of the weekend eating, drinking, laughing, and reminiscing, and above all celebrating a beautiful love story of two very wonderful people.

It was particularly special to me, as earlier this year my boyfriend and I moved a thousand miles away, to Austin, Texas. Since 2010 I’d lived a three-hour drive from my Chicago area childhood home, but now I felt exceptionally far from most of the people I love.

Emotions were high on the day of my friend’s wedding, and beyond the obvious excitement, we all felt a little nervous for her, as she’d expressed anxiety about walking down the aisle in front of so many people.

Based on her smiles and laughter, the day went by without a hitch, until ten minutes before the ceremony was set to start. My friend’s mother was holding up her veil and fanning her; she was feeling lightheaded. It seemed to be a combination of nerves and the fact that she’d forgotten to eat anything that day.

The bridesmaids and groomsmen (all 18 of us!) alternated between doting on her and giving her more space. We kept anxiously glancing at each other, silently asking, “What should we do?”

Then her mother started to sing. “Goooing to the chapel, and we’re gonna get maaaarried.” We all joined in.

We sang 60’s Motown, 90’s boy bands, every Disney song we could think of. When we couldn’t remember the words to a song, someone would shout out the beginning of a new one.

My friend got up and danced with her soon-to-be husband, and by the end of it all, she was smiling. I choked back tears, feeling the love fill the room. When the wedding planner told us it was time to line up, the bride was ready to go.

After the ceremony, I enjoyed the company of some old friends I hadn’t seen in years, danced and danced for hours, and shed a few more tears at some of the speeches in my friend’s honor. The next morning I woke up with a lost voice and leg cramps from dancing that didn’t go away for two days.

At the day-after brunch, my friends and I dissected what parts of the night had us crying the most, and I wondered out loud when in life I became such an emotional baby. Had I always been like this?

“No, you weren’t,” one of my high school friends said. “I think it happened when you moved away.”

Of course, she was right. Since I left the area in 2010 to work in TV news, I spent nearly every weekend or holiday working, and I missed a lot. Most birthdays, Thanksgivings, Christmases, and other reunions I was either working or simply unable to get back to town.

On an emotional level, I had become hyperaware of how lucky I was when I got to share in some of life’s most joyful moments.

I left that morning in the haze of a sort of happiness hangover. I reminded myself how important it is to cherish and nourish the ties with my oldest friends. I resolved to be a better friend—call more, make plans, reach out and make sure they’re doing okay, even if I can’t always be physically there to share my love.

I wish I had more time to soak in that happy feeling.

The night after the wedding, I was relaxing in bed at my parents’ house, surfing the web. I came across the Facebook status of an old family friend, and my heart dropped.

“I love you dad, look down on us and keep us safe.”

His dad was one of my father’s oldest, closest friends. He was my sister’s godfather and a groomsman at my parents’ wedding. For as long as I can remember, he had been there to celebrate every major milestone in our lives.

I went down to my parents’ room, uncertain how to break the news. My frown must have given something away, because my mom asked what was wrong. “I think I have some bad news,” I said. “I think Michael died.”

It was too late to call anyone, so we scoured Facebook for clues. By the end of the night, we were all but certain he was gone, though we weren’t sure how.

The next morning, as I was getting ready to catch a flight back to Texas, the phone rang. My dad was calling my mom from his office, but I picked up the other extension. I don’t think they knew I was on the line when he told her, “He killed himself.”

My mind was reeling. I stood in the shower, sobbing, not quite able to fully grasp that this person I thought would always be a part of my life was gone.

My dad dropped me off at the airport, and when he hugged me goodbye I felt a sob catch in his throat. I didn’t ask, but I suspected he felt guilty for not being more present for his friend. I think he wondered, as I did, if there was anything he could have done to keep his friend from taking such a drastic step.

That Wednesday, I missed yet another reunion because of the career path I chose, though this was, of course, the saddest of reunions. I swallowed my tears through a day of work and called my parents as soon as I got home.

The tears flowed as my mother told me how Michael’s friends and family packed the church; how the visitation line was so long they eventually had to turn people away.

He had been struggling with depression for months, after losing the liquor store business he ran for decades. His wife told my family that there was nothing they could have done; he refused phone calls and visits from nearly everyone.

I remembered my promise to myself to be a better friend. I wrote her a long letter, sharing my memories of her husband and saying how I have learned to appreciate what time we have with the people we love.

I thought of my parents getting married 26 years ago, filled with joy and surrounded by Michael and the rest of their closest friends. I thought of my best friend’s wedding, and the lifelong memories I’ll have of sharing that blissful day.

I wondered, in 26 years, will I be rocked by the news that one of the people I love has been taken from us too soon? Will I know I had done everything to let them know they were loved and cherished? Or will I cling to old memories, knowing I had let too much time and too many unsaid words fly by?

I resolved to be a better friend.

Let’s all resolve to be better friends. Because whether you are celebrating the greatest day of someone’s life, or filing in a line to say goodbye, today is all we have.

Just days apart, I learned the same lesson from both a joyful celebration and a terrible tragedy. Life is made special by the people we put in it. It shouldn’t require a wedding or a funeral to remind us that we are in this together.

Even from 1,000 miles away, you can let someone know that you love them. And in the process, you’ll probably see that you’re loved too.

Kristin Maiorano is a TV news producer. Originally from the suburbs of Chicago, she now lives with her boyfriend and two dogs in Austin, Texas. You can follow her on Twitter @krismaio.

Learning How to Love Unconditionally