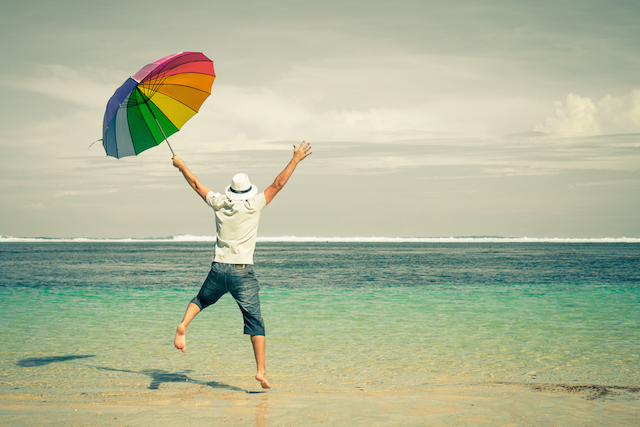 “He is a wise man who does not grieve for the things which he has not, but rejoices for those which he has.” ~Epictetus

When I lost my aunt to cancer three years ago, her death sat over me for months and acceptance didn’t begin until I had dinner with Kathy, one of my best friends.

Kathy asked me, “what about all the things you did get to do with your aunt?”

I shared with Kathy how every time I experienced a breakup my aunt would make me a bowl of pho and make time to reassure me that everything would be okay, how every time I thought I was working too hard and not having fun she would invite me to play cards with her, and how when I told my family I didn’t want to be a doctor and my family disapproved she supported me.

Tears sweep over my face with each story I was telling Kathy, but so did the biggest smile I had in a long time.

“You’re so lucky to have the known your aunt. Think about all the people who don’t have someone like that in their life,” Kathy said.

After that dinner, every time I thought about my aunt it would be about the memories I was grateful to have shared with her instead of the ones we wouldn’t get to have.

This single lesson not only helped me come to terms with my aunt’s death but also taught me to frame potential negatives in my life into positives.

Each time my flight is delayed (and it seems to happen a lot), instead of viewing it as missing four hours of my vacation, I think about lucky I am to even have an opportunity to travel.

Each time, I forget my subway card and choose to walk back to my house to get it, I think how lucky I am to even have a subway near my house.

Years later, I found that Kathy’s lesson wasn’t just coincident but had been scientifically proven.

Psychologists at the University of Northampton studied how people adapt to grief after exceptional experiences such as death of a loved one.

While this study had a small sample size and found no single factor can help overcome grief, they found having a lens of appreciating what you have/had instead of what you don’t helped one subject, “gratitude in feeling blessed to have had the time [subject] did with [loved one] as well as the overall change in his perspective, which was found to be transformative.”

The above finding about gratitude and happiness isn’t limited to just overcoming a personal loss, but can also increase our overall happiness when dealing with every day troubles.

When the study concluded ten weeks later, participants in the gratitude group reported feeling 25 percent happier and just better in general than the irked group.

How to Let This Habit Change Your Life

Though I have shared with you a practice that has changed my life and the science behind it, this habit will only change your life if you actively let it. And this is easy.

In your everyday life, you will encounter inconveniences and hassles—forgetting your keys at home, being stuck in traffic, or spilling wine on yourself. Each time this happens, simply pause and instead of focusing the negative outcome, remind yourself of the more positive larger picture—you have a home to come back to, you have time to reflect on your day, and you have access to dry-cleaning.

Over time by focusing on the positives of an event, you will maximize your outward happiness and minimize inner suffering.

Davis (@IamDavisNguyen) has been a reader of Tiny Buddha since 2011. He grew up in poverty before graduating from Yale University in 2015. Davis helps people build better lives for themselves and their families by helping them develop a more powerful mindset.

How Changing My Words Changed My Life for the Better

The ABC’s of Personal Growth: How to Live a Meaningful, Fulfilling Life