A Simple Path to Happiness and Success
By Jake OCallaghan 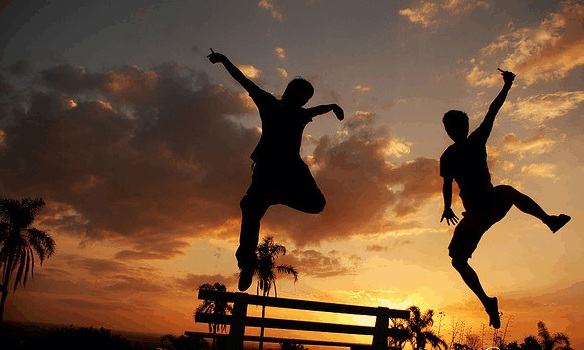 “What is the meaning of life? To be happy and useful.” ~Dalai Lama

Success is something most of us want. But we want happiness, too.

I think we go about these two important things the wrong way. With some simple changes, I believe anyone can become both happy and successful.

A man, dissatisfied with his life, wants to become successful, and, therefore, happy.

So he seeks out a millionaire. The millionaire is the head CEO of a Fortune 500 Company. He has fancy cars, many possessions, and most importantly, a huge mansion.

His business is the leader in his industry. It’s safe to say, he’s a conventional success.

Let’s call the first man Cody and the millionaire Richard.

Cody asks Richard “How do I become successful?”

“Walk to the beach with me,” Richard says. “I will teach you the secret to success.”

He agrees and they proceed onto the sand. Richard continues walking into the ocean. Cody is a little confused, but he follows.

Water is now up to their shoulders. Richard turns, and pulls Cody underwater.

He flails maniacally. He scratches. He kicks. He elbows Richard. He uses every bit of his strength trying to get this man off him.

His seconds are passing away. He wishes. He prays. He struggles even harder.

But he is becoming lightheaded. He knows he’s finished. He looks out from the water one last time…

But then he is above water. Richard pulled him out.

Cody gasps for air and spits out water. “What th… What the hell was that for?” he yells.

“To be successful,” says Richard, “you need to want success like you wanted to breathe.”

This story is for the super-achievers—people who want to do great things. We often admire these people. You might even want to become like Richard.

It was my philosophy, too. In fact, that story inspired me more than anything I had ever heard. I thought constantly about it, trying to apply it to my life.

The harder I worked and the more I became stressed, the more positive feedback I received. People told me they were proud of the path I was taking.

But in the back of my mind, I couldn’t shake that something was wrong.  I was sacrificing too much. My mental and physical health was crumbling along with my relationships. I was under a tremendous amount of stress.  Life and its small pleasures were slipping away from me.

It was summer vacation, and I still hadn’t been to the pool. I couldn’t sleep because all I thought about was achieving success. I was often hostile to people who I felt were wasting my time.

These behaviors were obviously not good—not for my happiness or for the people around me. But I was fond of quoting, “To be successful, sacrifices have to be made.”

And besides, once I became successful I would become happy, right?

“Let go of the idea that gentle relaxed people can’t be superachievers.”

In the brilliant passage that followed this headline, Richard Carlson, author of Don’t Sweat the Small Stuff, explained that not only are happy, relaxed people successful, happiness and peace can lead to success.

It was like a nuclear bomb went off in my brain. A minute of reading had shown me that the conventional tactic to success was wrong.

So let me get this straight: If I am happy and at peace, this will help me become successful? In other words, gazing at clouds can help me achieve my dreams?

I had to try this for myself.

I started learning and applying smart habits. I started waking up early and letting go of expectations and goals (instead, doing what excites me). I started reading for fun again (not just out of textbooks), strengthened my body, started running, began to eat natural (instead of out of vending machines), and focused on my loved ones.

I became happy and peaceful. Instead of dreading the day, I woke up excited to start.

And a strange thing happened:

My happiness led to improved efficiency. I was working less, having more fun, and getting more done.

I am at peace, yet I am getting more accomplished than ever. I work less, and accomplish more. My mind is clear and I am full of energy. My work is now full of passion. I don’t work to become successful; I do it because I love the work. In a short period of passionate work, I accomplish more than I used to in hours.

And if I have the opportunity to do something fun, I do it.  My life is happier, and I can go back to my dreams fresher than ever.

I used to stress over every word I wrote. Now I let my writing flow. I still try my best, but I don’t try to be perfect. I actually publish my writing now. And my writing has become better now that I’ve let go of obsessing over success.

My grades have improved too. Now I relax and attempt to enjoy the class. I learn not because of the grades, but to learn, and this has improved my grades. I let go of trying to become successful in school, and that has lead to a better chance at success.

Stress is no longer a major part of my life. Problems that once seemed huge and insurmountable are now much easier. Changing from a person worried about success and who tries too hard has made all the difference. Now I just flow, and anything seems possible.

How to Become Happy and Successful

What is success? I used to want it. Now I’ve achieved it. When I am happy, that makes me successful.

And by letting go of success I have furthered my chances to become what people traditionally think of as success.

So instead of focusing on success, forget it. Try your best and have fun. You will enjoy life and go far.

Jake O'Callaghan is a teenage writer who teaches simplicity and change. His blog Slowchange is about making real, lasting change in a world of fad diets and get rich quick schemes. His other blog zenteen helps teens find happiness and peace in their crazy, stressed lives.

Overcome the Fear of Success: 6 Ways to Start Thriving