Abuse Isn’t Always Physical, and We Never Deserve It
By Thea Baker 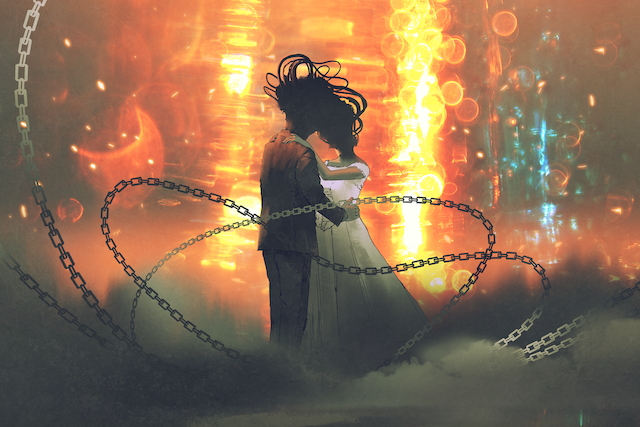 “A bad relationship is like standing on broken glass. If you stay, you will keep hurting. If you walk away, you will hurt but you will heal.” ~Autumn Kohler

It happens little by little, bit by bit. So very slowly that before you know it, you can’t recognize the person you lie next to at night and you hate the person you see staring back at you in the mirror.

Who is that person?

Where is the strong, capable, unflappable, and carefree person that you once were? When did you become someone so pathetic, so small and malleable?

I have never been the kind of girl who accepts bad behavior, let alone anything verging on abuse.

I believe in good manners, in kindness, in treating others as you wish to be treated. I also believe absolutely in apologizing when I get it wrong.

I don’t let my two little people get away with being rude, cheeky, or back-chatting a grown-up. So why did I let him treat me so appallingly? Why didn’t I stand up to him? Why didn’t I get out?

I have always made that call. I’ve always run away when I couldn’t do it anymore, or cut my losses before I could get hurt.

I ended my engagement to my ex mere months before the “big day.” I called time on my first marriage, seven years after saying “I do,” when three straight years of trying hard to fix it had failed.

So why didn’t I leave him?

People think domestic violence has to involve fists, bruises, and physical pain. Well, I can now put my hand up and admit that I was abused—but he never laid a finger on me. It doesn’t make it any less painful or significant or wrong.

I am beginning to get comfortable owning what happened to me, but its effects have lasting consequences that I am aware of almost daily.

The more time I spend analyzing what he did, and his potential motivations, the less I feel I understand what our relationship was about, and the more blatant the abuse appears.

He controlled, manipulated, and systematically ignored me.

I wasn’t allowed answer the door to other men if my husband wasn’t in the house, nor was I allowed to speak to other men at the pool where we trained.

He loved my little skirts and dresses while he was wooing me, but as soon as he had me it was always, “I hope you’ve got appropriate knickers on wearing that” or, “you will keep your legs closed if you go out wearing that.”

When he thought I had overstepped some invisible, unfathomable, and constantly shifting line, he could look me straight in the eye and yet completely ignore me for three straight days, without skipping a beat.

Not a word would leave his mouth. For days on end. And for a girl who can talk the hind legs off a donkey, that is pretty much the worst kind of torture imaginable. I was invisible. I was nothing.

But it happens gradually, remember.

In the beginning, he built me up and showered me with words of love and affection. He placed me on a pedestal and worshipped me. I had never felt so precious to anyone before.

He made himself the very center of my universe, and made himself so large that he obliterated everyone and everything else. Little by little, increment by increment, my universe became so very small, and by degrees I became myopic, a mere shadow of the woman I once was.

In some ways, the hardest thing for me now is coming to terms with the fact that I didn’t have the nerve to get out.

I had irrationally made the decision to stay because I truly felt that it was the only choice I had.

I think I justify it by saying that it was the only thing I could do—for the sake of my children. They had already been through so much; I couldn’t damage them further.

And anyway, his behavior was only directed at me. Once he had me controlled, managed, and living in fear, it was was only ever about me; I perceived that my children were safe from any form of direct threat.

The decision to get out, to get free and safe, wasn’t a decision I ever had to make, or got the chance to make. By some weird twist in the way the universe works, I received the ultimate “get out of jail free” card. The abusive monster of a man to whom I had given three years of my life died.

He died suddenly and shockingly, and in doing so simultaneously set me free and inflicted his biggest, most significant controlling act.

Now, almost exactly one year later, I still feel immense and overwhelming relief that I am out of that place; that like a caterpillar trapped, bound and confined, I have been able to break free and spread my beautiful wings.

But I still feel some misplaced sense of shame that I didn’t get to make that call. That I didn’t put my big girl brave pants on and make that decision first, and for me.

Being in that relationship is, without question, the biggest and worst regret of my life, one that I will carry to my grave.

I wanted to write this for all the people who feel trapped, who feel like a watered down impression of the person they once were. For the people who don’t feel able to speak out and ask for help.

I know how that feels.

I know the shame and embarrassment that keeps your lips sealed, even around those who you trust and love the most.

Just because there are no physical marks doesn’t mean it isn’t abuse.

When you question yourself and you try to tell yourself that it’s really not that bad, that he or she loves you, really, but has just got a few issues to deal with, or worse still, that it’s your fault he or she treats you this way, trust your gut.

If they continually put you down, shut you out in an attempt to manipulate and control you, ignore your needs, threaten you in any way, call you “crazy” or “overly sensitive” when you dare to raise your worries, and/or blames you for their reactions, that is not love. It is abuse.

It’s easier somehow to make excuses, accept the blame (you will even start to believe it), but know that you could end up spending the rest of your days in an a broken and painful place—a relationship where you feel small, worthless, and lonely beyond words.

Somewhere in your gut, you likely know this is true.

Whether your inner voice is yelling at you, or just whispering to get out, you know. You know it’s not right and that you deserve so much more. You deserve to have the chance for your wings to be set free.

And I pray that you do.

Thea started her working life in Human Resources; however, life changed after having children! She relocated to Australia in 2010 and switched careers focusing on health, fitness, and wellbeing for women. She now runs a successful personal training and small group training business - Thea Baker Fitness - and works almost exclusively with pre and postnatal women.