Accept Yourself as You Are, Even When Others Don’t
By Louise Watson 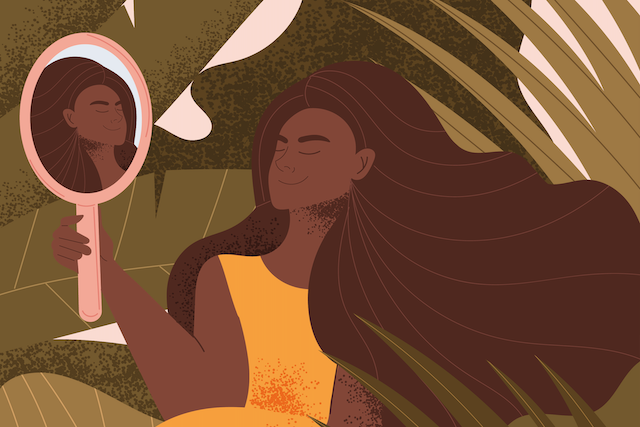 “What other people think of me is none of my business.” ~Wayne Dyer

This comment and others like it have plagued me almost all my life. I don’t know how many times I’ve been told that I needed to come out of my shell, to be livelier, or to talk more.

As a child and teenager, I allowed these remarks to hurt me deeply. I was already shy, but I became even more self-conscious as I was constantly aware of people waiting for me to speak.

When I did, the response was often, “Wow! Louise said something!”

This would make me just want to crawl back into my shell and hide. I became more and more reserved.

The older I got, the angrier I became. Each time someone told me I was “too quiet,” I wondered what exactly they were hoping to achieve anyway. Did they imagine I had a magic button I could press that would turn me into Miss Showbiz?

If only it were that simple, I thought. I felt I should be accepted as I was, but apparently that wasn’t going to happen. There was only one thing for it; I would have to become the extrovert the world wanted me to be, but how?

At seventeen, I thought I’d found the perfect solution: alcohol.

When I was drunk, everyone seemed to like me. I was fun and outgoing; able to talk to anyone with no problems at all. However, it began to depress me that I needed a drink to do this or for anyone to like me.

Another strategy was to attach myself to a more outgoing friend. I did this at school, university, and later when I began to travel a lot in my twenties.

Although I didn’t do it consciously, wherever I went I would make friends with someone much louder than me. Then I’d become their little sidekick, going everywhere with them, trying to fit in with all their friends, and even adopting aspects of their personality.

Sometimes I just tried faking it.

When I was twenty-four, I began teaching English as a Foreign Language, and a month into my first contract in Japan, I was told my students found me difficult to talk to. I was upset because I thought I had made an effort to be friendly and I didn’t understand what else I could do.

After crying all night because once again I wasn’t good enough, I went into work the next day determined to be really lively and talkative. Of course, it didn’t work because everyone could see I was being false.

It seemed that I was doomed. I would never be accepted. Being a naturally loud person was the only way to be liked.

Over the years, I’ve spoken to several talkative, extroverted people who’ve been told they’re too loud or that they talk too much. It seems whatever personality you’ve got you’re always going to be “too much” of something for someone.

What really matters is: do you think you need to change?

My shyness has made some areas of my life more difficult. It’s something I’ve been working on all my life and I always will be in order to do all the things I want to do.

However, I’ve realized I’m always going to be an introvert, which is not the same thing.

I enjoy going out and socializing, but I also enjoy being alone. At work I talk to people all day, every day. I like my job, but as an introvert, I get tired after all that interaction, so later I need some quiet time to “recharge my batteries.”

I can overcome my shyness. I can’t overcome my introversion, but actually, I wouldn’t want to because I’m happy being this way.

Be kind to yourself if you decide to change.

While I’m still shy, I no longer worry about it.  When speaking to new people, if something comes out wrong or I get my words mixed up, I just laugh to myself about my nervousness rather than telling myself how weird the other person must’ve thought I was.

In the past I was terrified of any form of public speaking. Now my job is getting up in front of people and talking. After a rocky start in Japan, my students now see me as funny (sometimes!) and confident.

So I think I’m doing alright. No, I don’t understand why I can’t just be like that with everyone, but I’m not going to beat myself up about it. I’m doing my best and that’s all I can do.

When you’re always being told you’re too much of this or not enough of that, it’s easy to start thinking you have to be grateful that anyone is willing to spend time with you.

I used to put up with friends who treated me badly because I thought if I stood up for myself, I’d lose their friendship and I’d end up all alone.

Eventually, in my last year teaching abroad, I did stand up for myself and my worst fear came true. I was left completely friendless.

And you know what? It was okay. The time alone taught me to enjoy my own company, and gave me the chance to learn more about myself. This has gradually led to me attracting more positive people into my life.

Could your supposed weakness actually be your strength?

I’m a good listener, so friends feel able to talk to me if they have a problem and they know I’m not going to tell anyone.

I’m an efficient worker because I just get on with the job. I can empathize with shy students in my class. I don’t force them to speak but leave them alone, knowing that they’ll talk when they feel more comfortable.

There’s a reason why you were made the way you are. If we were all supposed to be the same, we would be.

The “quiet” comments are also now few and far between. When you learn to accept yourself, you’re likely to find that others will accept you too.

But if they don’t, it really doesn’t matter.

Louise Watson is a writer and meditation teacher living in Hampshire, UK.

Being Shy Made Me Strong, and It Can Do the Same for You