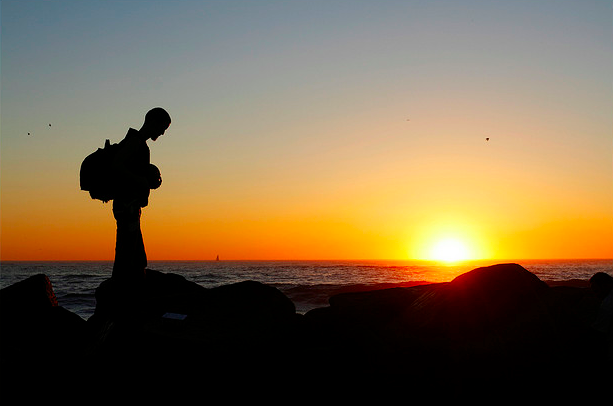 “Being happy doesn’t mean that everything is perfect. It means you’ve decided to look beyond the imperfections.” ~Unknown

I’m back in New York City after touring for the last five years as a global musical scientist.

My international and domestic sonic experiments took me all over the world to exotic lands and faraway locales.

I also wrote and recorded a number one single in Copenhagen, Denmark. Likewise, I traveled to France, Finland, Russia, and Spain, as well as several national stops: Austin, Texas, DC, Boston, California (twice), and Hawaii, to name a few.

I even lived with a Costa Rican family and became a real ‘tico’ in San Ramon. Furthermore, I discovered a floating village in Cambodia, talked art science shop in Singapore, and had the backs of my knees lit on fire with moxibustion in Koh Samui, Thailand.

Sounds glamorous, but in all that life spice the one consistency was myself, and let me tell you, you can really get to you.

As wonderfully liberating and bohemian as it was to pick up and play from country to country, from foreign foods, cultures and languages, to random rules, regulations, and rites of passages, it also became a constant struggle to perfect the adventures.

Naturally, practical fears ensued: How would I finance myself on the road from tour to tour? What would happen if I couldn’t understand the language? How would I be able to reach anyone in the middle of the Amazon?

But the worst mind chatter came from my own self-doubt: How is this record manifesting given the fact that I have a unfamiliar, makeshift studio instead of my usual recording space? Is this one gigantic failure?

Does anyone understand what I’m doing or what I mean? Can anyone hear those ambient birds behind the vocal and piano line? Is there even a piano at the next stop? Wait, why am I doing this again? What is a musical scientist?

I was obsessed with perfection, particularly as it related to my work, and it was starting to take the fun out of my experience.

As an artist/scientist hybrid, I usually feel balanced between the creative and logistical, but the need to perfect my experiments started to weigh on the childlike, free, and non-judgmental parts of myself.

I was striving for my work to be a huge success upon initial conception instead of letting the manifestations of failures become the real magic in process.

It was during my time in Singapore while visiting a friend that I developed a perspective change to help me combat this uber desire to micromanage my situations.

With eighteen hours on the plane to think, I began to imagine that we all have a life pie with slices representing certain parts of our life. For instance, each sector could be divided into finance, love, health, relationships, career, and so forth.

It dawned on me that the majority of the folks I met and had deep conversations with on my travels shared stories of their imperfect piece(s): “I lost my job,” or “She dumped me,” or “I come from a messed up family.”

It was often easier for people, myself included, to dwell on the missing segment, the piece that didn’t match the others, and focus on trying to tweak the weak.

The pattern I recognized was that no soul’s life pie was ever completely maximized, at least not at the same time. There’s always a “piece in progress.” Maybe one, two, perhaps even half the pie didn’t look like the rest.

I visualized a life pie like a leaky faucet. As soon as you fix one of the spouts, the pressure adjusts to the other side, and pretty soon you’re exhausted trying to Band-Aid all these pressure points.

I’m reminded of my favorite tale, “The Story of The Golden Buddha,” by Jack Canfield and Mark Victor Hansen.

To paraphrase, approximately 300 years ago, the Burmese army planned to invade Thailand.

Thai monks had an incredibly gorgeous golden Buddha statue within their monastery and wanted to protect their treasured possession during the attack, so they covered the statue with dirt, clay, and sticks.

As the Burmese pressed into Thailand, they killed all the monks, but left the precious Buddha be, as it was disguised.

During the mid 1950s, the monastery was relocated to make way for city developments, and as the monks began moving the Buddha, the clay began to crack and fall to the floor. Only then, after all that time, did the gold underneath begin to shine.

To me, the tale’s a constant reminder that we, like the golden Buddha, spend too much precious time cloaking ourselves with mud in the form of societal coding, personal pressures, and expectations deeply fixed in fear.

But, by accepting these self-perceived shortcomings as part of the bigger picture, we realize that we each have our own labyrinth as we go through life. This is how we learn life’s lessons, slowly revealing more of our golden uniqueness.

If we obsess about perfection, we’ll just stay stagnant and idle instead of moving forward with our pieces in progress, allowing them to be part of the journey toward self-realization.

Even the gravitationally bound system consisting of stars, dust, and matter that constitutes our universe has endless imperfections, such as windstorms, black holes, and galactic hurricanes.

If we, as humans, are living in this totality of existence rooted in chaos, we can only expect to mirror it. Understanding that there’s nothing wrong with us for having imperfect life pies can help us make peace with our piece in progress—and ourselves.

Global musical scientist, Melanie Edwards, is a classically trained pianist, violinist, singer and songwriter who also studied nuclear science.  Touring worldwide with her symphonic lab, she captivates audiences with her haunting vocals and complex melodies. Edwards negates predictable pop formulas, often incorporating her fans into the mix and improvising song sketches.  Her albums are available on iTunes and Amazon.

We Need to Be Giving: Kindness Can Be a Win-Win Situation