Are You Stressed, Rushed, and Aggravated?
By Kenneth Vogt 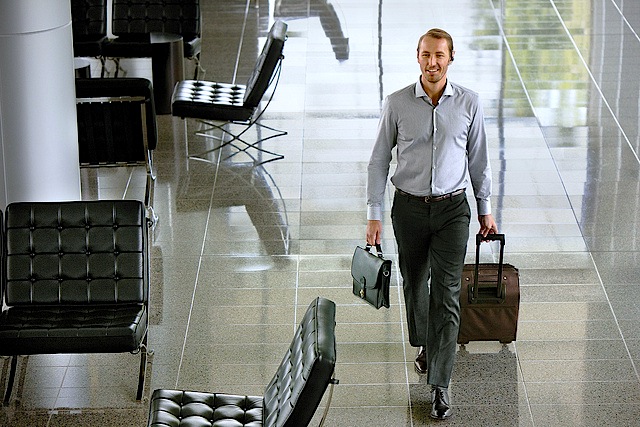 “Meaning is not what you start with but what you end up with.” ~Peter Elbow

As a boy, I had a romantic notion about having a job where I traveled for business. It sounded so important and stylish. I liked the idea of dashing through airports to my next big meeting.

I thought it meant that mine would be a wider world. And so it was.

Be Careful What You Wish For

As often happens, what you think about comes into being. I found myself on my very first “business trip.” I was going to the exotic location of Moline, Illinois.

In my fantasies I was thinking more along the lines of NYC or London, but hey, it involved an airplane. Actually, it wasn’t even a jet; it was this very loud, somewhat cramped prop plane.

Dashing Didn’t Turn Out To Be So Dashing

My life and work continued down this same path, so occasionally schedules were tight. Once, I remember literally running through an airport so as not to miss a flight.

It looks good in the television commercials but let me tell you, running in a suit and tie, toting a briefcase and an overnight bag isn’t so sexy. It’s more sweaty and disheveling. I must confess, I felt less than debonair.

The Illusion of the “Good Seat”

Every flight (and there were many), I vied for a good seat with the rest of my fellow business travelers. I gloated over my exit row seat or my aisle seat. I glared enviously at the first class passengers, already seated with their complimentary mimosas.

When it came time to disembark, I leaped to my feet the moment the “Remain Seated” sign went out. I mean, you’re supposed to. At least you must be, because that’s what everyone else was doing.

I told myself it was important that I leave the plane immediately. After all, I had pressing business. That’s why I’m flying.

And Then I Woke Up

This dream of being a business traveler turned out to be not so dreamy after all. Traveling is a hassle with the hotels and cabs and parking garages and strange cities and expense reports. Airplane seats are tight and fellow travelers are sometimes surly.

This isn’t what I signed up for. I started to wonder about the ground rules I had assumed regarding flying for a living.

What is a good seat? I’ll tell you. There’s only one on the plane: it’s the one the pilot sits in.

The rest of us, no matter where we sit, are getting basically the same experience. Once I accepted that, I have never had a bad seat.

What’s the rush to get off the plane? When I wait until everyone else has cleared out around me, it is far easier to collect my things. I don’t hack anyone else off by getting in their way to rush off the plane either.

I generally go for the window seat now, not because I prefer it particularly. It just means I am not in any hurried person’s way when it comes time to deplane.

I get to airports early. I check in and kick back. Did you know they put bars in airports? I find this highly convenient for this back kicking.

I pack light. I generally travel to places that sell just about anything I regularly use. I have found that even developing countries have food and toiletries for sale.

Once I found myself on an overbooked flight. Five people were in front of me in line trying to get boarding passes. As each one of them in turn berated the gate agent, all she could do was apologize and say she couldn’t give them a boarding pass at this time.

When it was my turn, I saw her steel herself for the next verbal assault. But I figured something out as I stood in line: berating the poor lass wasn’t resulting in a boarding pass for anyone.

So I just said, “Tough day, huh? Listen, if you can get me on this flight I would really appreciate it. Just do the best you can.”

Five minutes before they closed the jet way doors, she called one name to give out a single boarding pass—mine.

I wanted to throw a fit as much as the next guy as I stood in line. But what would be the point of ranting at the last person who could help me who, incidentally, was not responsible for causing my problem?

I didn’t see one glimmer of recognition out there amongst those envious faces of the grounded either. They all had the same chance as me and they had it first. We make our own reality. Own it, or don’t.

The bottom line is this: air travel, or anything else, is what you make it. I got to live my illusions until I decided they no longer served me.

I have a far different experience now, even though the external details remain basically the same. I have no stress and I get where I want to go when and if I have a notion to go anywhere at all.

I am a fan of destinations, but the journey happens too. While I may not have always taken the road less traveled, these days I always choose the travel encounter less experienced.

You know how many small business owners have lots of ambitions but can’t seem to get clear about how to turn them into reality? Kenneth teaches them how to make their ambitions real at www.VeraClaritas.com.

What Annoying Situations Teach Us about Ourselves