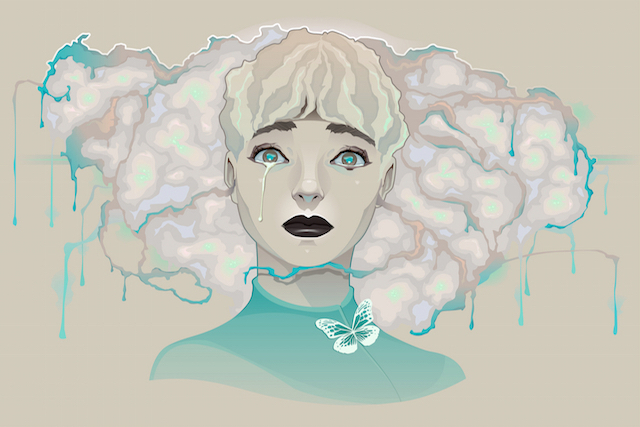 If you have ever felt the depths of depression, you know it’s not the same as being sad or having “the blues.” It’s the hopeless, overwhelming feeling of melancholy where nothing, not even the people you love, can pull you out.

It can feel like being under water in the ocean while the waves keep washing over you, pushing you further and further underneath, while no matter how hard you try, you can’t seem to break the surface to get that much needed air in order to survive.

Unfortunately, I am no stranger to this foe, this unwelcomed presence of darkness. I suffer from chronic depression, and it has followed me around for many years, letting me know that it will never completely disappear.

For a long time, I thought of myself as a victim. It always seemed that others had it much easier. I felt so alone. While I knew there were others out there who suffered from mental illnesses, it was hard to not have a “poor me” attitude while living in it.

I got to the point where I wouldn’t even try to go beyond taking a pill every day to stave off the depression. I felt hopeless most of the time. Even in good times, beneath the surface, there was sadness over the impending doom that I knew would eventually take over again.

The last major depression I had was a year ago. I had to move back in with my parents (at age 34) when I was jobless, hopeless, and had just hit rock bottom. This has happened more times than I care to admit.

But this time was different because I was determined to crawl out of that dark place and never fall back in again.

I had a choice—I could either keep going down the same old traveled road where I knew all the stops and turns, or I could veer off in a new direction, one that might lead to inner peace and happiness.

I decided to take the road less traveled. It has not been an easy one because I’ve hit plenty of bumps and I’ve also crashed into a wall or three. The biggest challenge was finding decent mental health care, since I had spent years searching for it, to no avail.

After finally finding a good psychiatrist and getting my medication tweaked, I added some much needed therapy. This has helped me come to terms with the fact that, while my chemical imbalance is something that I was born with, I wasn’t controlling my illness; it was controlling me.

This last year has truly been a turning point for me. Keeping a journal of my thoughts in both good times and bad has led to an epiphany about the way that I think.

I realized how hopeless I had been for so many years. I was so jaded that I truly believed I would never lead a happy life due to my mental illness.

I used to think that happy-go-lucky people had never experienced any hardships. I now realize that while those people actually do have problems, it’s their attitude that gets them through the rough times.

I now know that while I cannot change what has happened in the past, my attitude and outlook in the present will help me deal with whatever happens in the future. Having control over my thoughts will make my inner world a place of freedom instead of a prison.

I’ve become determined to be one of those happy people. But that takes work—lots of work!

My negative mind rejected the idea of any positivity at first. Slowly but surely, using affirmations in my daily life has provided much needed guidance in my ongoing metamorphosis into a positive person. It takes practice to train your mind and you have to work at it each day, but it can be done.

So how does someone become a positive person?

Work on erasing that negative song playing over and over in your mind.

Replace that track with a positive tune and make sure it is one you can dance to!

Use daily affirmations. Two that have helped me are:

“I willingly accept things as they come, even if I don’t like it.”

“How I respond is always my choice.”

Keep reminding yourself of the good things in life.

Take care of yourself physically and it will help you mentally, as well.

I have to remind myself often that change is not going to happen overnight, and it will take more than a few months to be able to become the positive person I desperately want to be.

I’m trying to talk to myself in the same compassionate way I would talk to a friend. I am working on seeing each incident in my life as beneficial to me in some way.

In the last year, I have started yoga. Quieting my mind has proven to be quite a difficult task to master, since my brain is a blabbermouth. However, each breath helps be in the moment. I’m still pretty inflexible, but I have goal poses that keep me motivated.

I have also started to meditate, which has proven to be even harder since, even though I have no trouble being still physically, that talkative mind of mine won’t quiet. I was frustrated until I started to use some daily affirmations and chants. I’m now able to channel and squash all those negative thoughts that pop up.

I have also found writing to be a passion. Putting my negative thoughts on paper helps me to identify the distorted thinking that can still occur from time to time. It also helps me spin those thoughts into positives and look at things from a new perspective.

Negative thoughts may creep back in sporadically, but I remind myself that how I respond is always my choice. If I have problems, they occur because I still have more to learn.

Since I control my thoughts, I can decide to think positively about anything. My happiness ultimately depends on me.

When I feel those creepy incessant thoughts start bubbling around in my brain, I remind myself that it took time for me to fall apart, and that means it may take a substantial amount of time to put myself back together again.

While I hope I’ll never experience depression again, I know that I may. I also know that next time I feel it looming, I won’t go down without a fight. I’ve grown as a person and I am stronger today because of it.

Many people say that you are who you are and you can’t change. I don’t think that’s true. It may take a long time and there will be days when those negative thoughts creep back in, but anyone can be more positive if they really work at it.

Elizabeth Patterson has finally decided what she wants to be when she “grows up” and has reinvented her life by starting a career as a writer. She hopes that one day the stigma associated with mental illness will disappear altogether and everyone will be well educated on the subject. She will continue to tell her story at: http://talesfromgingergirl.blogspot.com/