You’ll Always Have This Day, No Matter Where It Leads
By Lori Deschene 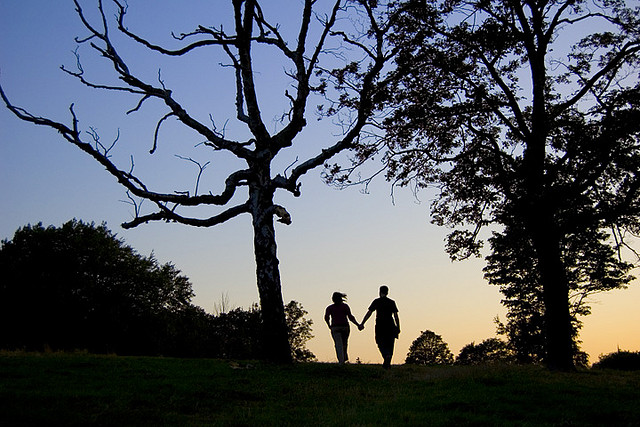 “If you surrender completely to the moment as they pass, you live more richly those moments.” ~ Anne Morrow Lindbergh

Last week on Valentine’s Day, my boyfriend Ehren and I had a meeting we’d both spent months working toward.

After writing and rewriting a romantic comedy screenplay for over a year, and consulting with a screenwriter friend to improve it, we’d finally secured a meeting with an agent—her agent. At one of the largest agencies in Hollywood. Presumably to represent us.

We couldn’t have been more thrilled to know our project might have a real future, and the timing of it, on Valentine’s Day, seemed serendipitous and made it even more exciting.

The opportunity felt even more gratifying because we’d both been in need of some good news since Ehren’s brother’s sudden passing in December.

We’d just moved out of our Los Angeles apartment with plans to spend time with his parents in the Bay Area and work on various creative projects together. Yet there were, mere days after our move, heading back to the home we’d just left.

Though we’d lived in LA for over two years, the city looked different through the lens of magnified possibility.

We spent the whole drive discussing our next screenplay and planning what we’d say in the meeting. I spent each moment of silence fantasizing about casting, filming, and premieres—a whole new life on the other side of this day.

We ate at a classic Hollywood deli and ran into one of my favorite comedic actresses. One day we’d write a role for her, I thought.

We then walked around the neighborhood for a good thirty minutes before arriving early but not too early for what seemed like the most important meeting of our creative partnership.

I jittered and rambled while sitting in the waiting room. I wanted to be sure that when we walked in, I said enough but not too much, and generally put my best foot forward for the best possible outcome.

So much had led to this one moment, and I felt that our whole future was wrapped up in it.

I nearly tripped on my too-high heels as the agent’s assistant led us to his office—right before he greeted us by saying, “It’s nice to put faces to the names. I know it’s tough to be new in the business, so I’m happy to offer any advice I can.”

Forty-five minutes later, we shook his hand and left his office. He’d been friendly, gracious, and generous with his time, but we left without having discussed our screenplay, beyond him mentioning that romantic comedies aren’t selling right now.

This day, which had become the center of a fantasy, had come and gone without changing our world in any discernable way. And yet we weren’t nearly as disappointed as we thought we’d be.

This day could have created a whole new trajectory for our lives, and yet even without it leading where we’d hoped it would, we still felt excited about it.

That night as we ate a five-course Valentine’s meal downstairs from our hotel room, equally overloaded with calories and uncertainty, I thought about the start of our relationship.

On our first date in 2009, Ehren had recounted his varied experiences with traveling and adventure activities.

Feeling inspired and a tad envious, and wanting to impress him, I mentioned that I’d always dreamed of skydiving and that I’d love to do it someday—someday being the operative word.

Sure, I meant it, but I wasn’t yet fully invested in doing it, especially considering my near-paralyzing fear of heights.

Still, he jumped on this and suggested, “Let’s go on our second date.”

I silently panicked, wondering how I could get out of this after so passionately expressing my lifelong desire to hurl my body from a tiny aircraft.

Perhaps it was because he recognized my inner conflict and knew the desire was stronger than the fear that he then said, “If you want to see me again, you have to jump from a plane.”

I highly doubt he really meant that, but looking back, I realize my willingness to accept this challenge contributed to his falling for me.

And what he said on the long second-date drive contributed to my falling for him.

I commented that he’d invested a lot in the date, in terms of time, effort, and money. Skydiving isn’t cheap, and it also wasn’t close geographically. On top of that, he’d arranged to cook dinner for his grandmother and me at her nearby house.

Sure, he may have had a good feeling about me from that first date, but no doubt about it, this was a risk. We could have realized in talking on the drive that we simply weren’t compatible. He could have gotten halfway through the date and realized there wouldn’t be a third one.

I couldn’t help but ask him if that had crossed his mind.

To that, he said, “Well, no matter what, I’ll always be the guy that brought you skydiving.”

This blew me away. It meant he hadn’t gone to all that effort solely because he’d attached to a certain outcome. He wasn’t focused on an endgame, or expecting anything specific in return.

He’d planned an exciting day with me knowing that no matter what, the day itself would be worth the effort. Regardless of what became of us, he wouldn’t regret the experience.

He’d be happy knowing we shared this day together, regardless of what we shared going forward.

It wasn’t either of those things, but it will always be our first meeting with a Hollywood agent. And the Valentine’s Day we spent a night at the Hilton together. And the day we remembered how grateful we are that friends take the time to help us.

So often in life we attach all of our hopes and dreams to specific moments in time, getting caught up in the possibility of everything changing or moving forward thereafter.

Maybe the key to happiness is knowing that the value of any moment isn’t always about where it leads. It’s about how we perceive it, live it, appreciate it, and then move forward on the journey, still excited about the path ahead, wherever it may take us.