Believing in Our Goodness: Do You Have Faith in Humanity?
By Daniel Goldsmith 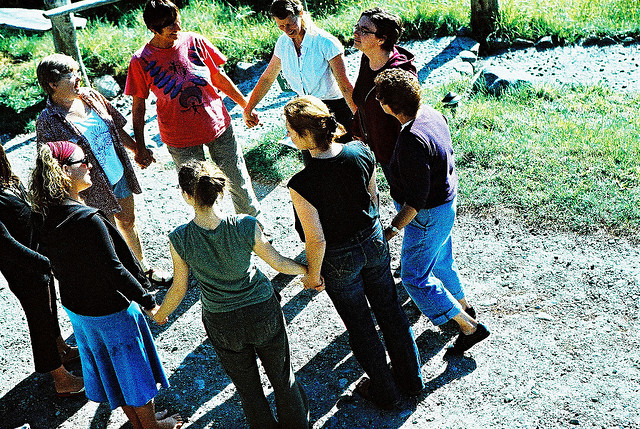 “Faith is taking the first step even when you don’t see the whole staircase.” ~Martin Luther King, Jr.

When we hear someone speak about faith, we usually expect to hear about some kind of subjective encounter with supernatural forces. In our skeptical age, we tend to look at faith as “believing in something you know not to be true,” as Mark Twain expressed.

Before we dismiss any talk of faith, however, we should remember that there are many ways to understand the word. You can have faith in a benevolent, loving deity guiding your every move. But you can also have faith that you’ll wake up in the morning. Or that the dollar in your pocket today will be worth as much tomorrow.

For me, a “revelation” of faith came while sitting around a table with a group people determined to respond to violence with love.

I didn’t realize it at the time, but this experience reaffirmed my faith that human beings are fundamentally loving and good, and will help and care for each other when given the chance.

I think that faith really is the right word here, because holding onto this viewpoint in light of so much evidence to the contrary does indeed requires a “leap,” to borrow Kierkegaard’s famous line.

This understanding emerged at a visioning process for the “Dawson Peace Center.” To its great credit, the Dawson College community has chosen to respond to the 2006 shooting not by putting bigger locks on the doors and stockpiling weapons, but by spearheading meaningful initiatives designed to cultivate peace.

For my part, at this meeting, I spoke about the contributions that meditation might make in addressing the roots of destructive behavior, and how we might be able to integrate it into the college’s culture.

During the meeting, I didn’t really feel like anything was out of the ordinary. Sure, I was inspired by many of the ideas that the other 20 people in the room put forth, but toward the end, my attitude began to shift as I realized that what was happening here was truly extraordinary.

Here, we had a group of committed people seeking, however imperfectly, to affirm that the power of love is stronger than fear.

Here, at least a few people understand that responding to violence in kind makes us no different than the perpetrator. Here, a group has resisted the temptation to let the violent imagination of a disturbed individual hijack our own.

It takes strength and courage to stand up and say, despite all the evidence to the contrary, that human beings are fundamentally decent, kind, and caring, and that we have the responsibility to nurture these attributes.

This audacious belief in basic goodness takes guts. It takes faith. And that’s what I saw around that table.

We’ve all seen how human imagination has the power to create scenes of terror and violence (just open up the newspaper). But it also has the possibility to respond to those who unleash the demons with compassion and understanding, which to me seems the greater power (and usually gets far less media attention).

This is the truth that every saint and sage has communicated: hatred never ceases through hatred. Only love has the power to heal. This is not really a “spiritual” or “religious” truth; even a jaded, secular humanist can see this at work.

It’s up to each and every person to develop the understanding that no matter how far removed someone might seem from this basic goodness, no one is beyond redemption.

Buddha and Jesus hung out with murderers, prostitutes, lepers, and other types of people who society had “thrown away” and given up on. What these marginalized people needed was compassion and understanding, not ostracization and judgment.

And when a teacher who had discovered his own “enlightened nature” spoke to them, they were able to discover that within themselves.

These people who had lead lives of violence and impropriety often went on to become exemplary disciples; the mistakes they had made in their lives were not sufficient to corrupt their essence and potential.

In the eastern traditions, this is expressed through the image of a gem covered with mud, or a lamp coated in dust. These images affirm that the treasure/light is always there, and has only temporarily become obscured.

But in order to sustain the commitment and diligence to undertake the “polishing” process, you must first have an inkling that there is something valuable waiting for you underneath.

Meeting an enlightened teacher can certainly arouse this faith, but coming into contact with the enlightenment that flows through us all when we seek to act with love and compassion is also a catalyst.

It’s by no means certain that we will uncover this treasure in ourselves, much less be able to help others discover it in themselves. But as I felt very deeply around that table, there is intrinsic value in the effort itself.

Everyone’s face communicated the determination to love, despite everything. We understand that the alternative of powerlessness and despair is not really an alternative at all.

Whatever we think about the world becomes a self-fulfilling prophecy, so if we really want to create a world of peace, then we truly have to believe that it’s possible. Even very optimistic people like myself occasionally need boosters of faith to maintain this truly revolutionary attitude.

Daniel Goldsmith currently teaches in the humanities department at Dawson College in Montreal. He is the author of Choose Your Metaphor: Walking the One Path That Goes by Many Names. Daniel blogs about philosophy, spirituality, and life at www.chooseyourmetaphor.com.

Understanding Is Love (and the World Needs More Love)