Learning to Stop Clinging to People: Know That You Are Loved
By Elizabeth Garbee 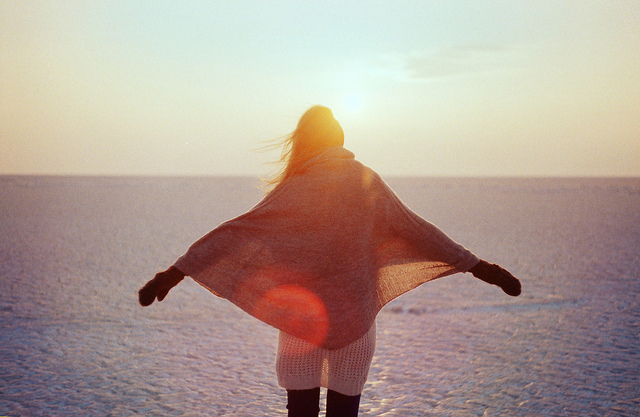 “As long as you make an identity for yourself out of pain, you cannot be free of it.”   ~Eckhart Tolle

I have a heart condition. Not one that you could see on an x-ray, or even one that you would find in a medical textbook.

For as long as I can remember, I have felt like my heart has had a gaping hole in it—and I’ve been stuffing anyone, anything into that space to try and feel a little less empty. A little less alone.

The first day of my freshman year, I met a girl.

We spent the rest of the day together and discovered we had an uncanny amount in common, including our values and a passion for the violin. We even had the same name. So I decided then and there that she would be that college friend that everyone talks about, that friend with whom you share everything and never lose touch, even after you’re both old and gray.

I had decided she was the perfect shape to fill the hole in my heart.

I then proceeded to spend as much time as possible with her and her friends, ignoring the people I had grown close to in my dorm. I even declined invitations from classmates to go out to eat, get a coffee, or even just go with them to the library; I wanted to be available in case she and her friends decided they wanted to do something with me.

Yet even though I thought I had finally found a group of people that made me feel complete, there was always this underlying fear—a fear that they were just pretending to like me, that I was a second-class citizen in this clique.

And then she broke the news to me. “You make our group dynamic awkward,” she said. “We think you should go find some other friends.”

My heart now felt even more empty and alone than it did before I met her, because I had built an identity for myself based on a friendship I had forced—a relationship I had made fit simply because it was there and available.

After that, I slowly started spending time with my other friends and started enjoying their company again, but I still withdrew and isolated myself.

I couldn’t imagine that anyone would want to spend time with me if she and her friends didn’t, and that perception made it almost impossible to believe anything good anyone said about me.

A few months later, an old crush came back into my life.

We had been talking sporadically for years, but this relationship was also forced. I loved him desperately and had told him so on several occasions; while he didn’t feel the same, he still cared enough about me to want to keep in touch.

But the more we started talking, the more I became convinced that there was finally something there—the more I came to believe that he wanted something more than just friendship.

So a year later, I had completely invested my self-worth and esteem in his occasional emails and even rarer phone calls. And though our conversations were a little awkward and a bit strained, I continued to read in between lines that simply weren’t there.

When I asked him if he wanted to try a “formal relationship,” he looked confused and completely blindsided.

I stopped talking to him and harbored a highly combustible combination of anger and resentment.

My carefully constructed identity, made from assumptions and wrongly interpreted signals, had just come crashing down—and I was left, again, wondering how anyone could love and value me if this man I had known for eight years didn’t.

At least not the way I wanted him to.

My overwhelming desire to feel loved and wanted by one person in particular had once again blinded me—and this pain I had created for myself, this empty ache in my chest, was the only thing I could feel.

The Buddhists have a word for this: samskara. A pattern, a habit you get into that is so seductive you almost want to continue the cycle. In my case, a cycle of self-inflicted suffering and abuse.

I was convinced that because I wasn’t in a “relationship,” because I had never had a significant other (nor had I even ever been kissed), I wasn’t loved. Worse, I started to think that I just wasn’t the kind of person anyone could come to love that way.

I had wanted love from a specific kind of person, because I was convinced that was it the missing piece in my heart. And because I hadn’t found it yet, I had measured my life that was full of love and support and still found it wanting.

He and I just recently started talking again, and though we’ve worked through a lot of the pain and confusion in our relationship, my blood pressure still skyrockets when I simply hear his voice. This reaction isn’t to him in particular, but simply because he serves as a powerful reminder of all the pain I’ve created for myself over the years by weaving fantasies around the people I choose to cling to.

I see him again in a week.

While most people prepare for guests by cleaning the house, stocking the fridge, and making sure the spare bed is turned down, I’m doing something a little different.

I’m working on getting to know myself.

If I don’t remember who I am independent of what he thinks of me, I’ll just get sucked back in; and the disappointment that we aren’t what we “could have been” will continue to keep me from being the person I have always wanted to be—the person who loves herself for who she is, not for which person chooses to love her.

I’m not going to pretend that this will be easy. Ripping away Band-Aids and actually facing the wound underneath never is.

But this time, I know I’m going to be fine.I know this because, even though it may not come from him, or her, or anyone else I’ve tried to stuff inside my heart, I’m surrounded by love. Unconditional love that is freely available to anyone who knows to look for it.

No matter where you are in your journey, no matter what you do for a living or even what you eat for dinner, you are loved. And if this samskara has taught me anything, it’s that only when you’ve opened your heart to the love that already surrounds you can you begin to see it elsewhere.

Elizabeth Garbee is a college student who loves her brother, her cats, and playing the violin. She's a regular reader of Tiny Buddha, but this is her first contribution to the site.